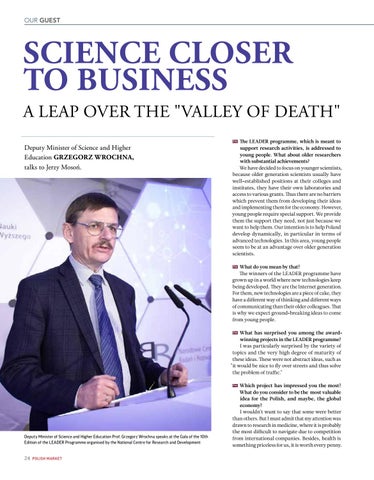 SCIENCE CLOSER TO BUSINESS A LEAP OVER THE "VALLEY OF DEATH" Deputy Minister of Science and Higher Education GRZEGORZ WROCHNA, talks to Jerzy Mosoń.

The LEADER programme, which is meant to support research activities, is addressed to young people. What about older researchers with substantial achievements? We have decided to focus on younger scientists, because older generation scientists usually have well-established positions at their colleges and institutes, they have their own laboratories and access to various grants. Thus there are no barriers which prevent them from developing their ideas and implementing them for the economy. However, young people require special support. We provide them the support they need, not just because we want to help them. Our intention is to help Poland develop dynamically, in particular in terms of advanced technologies. In this area, young people seem to be at an advantage over older generation scientists. PM

What do you mean by that? The winners of the LEADER programme have grown up in a world where new technologies keep being developed. They are the Internet generation. For them, new technologies are a piece of cake, they have a different way of thinking and different ways of communicating than their older colleagues. That is why we expect ground-breaking ideas to come from young people. PM

What has surprised you among the awardwinning projects in the LEADER programme? I was particularly surprised by the variety of topics and the very high degree of maturity of these ideas. These were not abstract ideas, such as "it would be nice to fly over streets and thus solve the problem of traffic." PM

Which project has impressed you the most? What do you consider to be the most valuable idea for the Polish, and maybe, the global economy? I wouldn't want to say that some were better than others. But I must admit that my attention was drawn to research in medicine, where it is probably the most difficult to navigate due to competition from international companies. Besides, health is something priceless for us, it is worth every penny. PM

Deputy Minister of Science and Higher Education Prof. Grzegorz Wrochna speaks at the Gala of the 10th Edition of the LEADER Programme organised by the National Centre for Research and Development