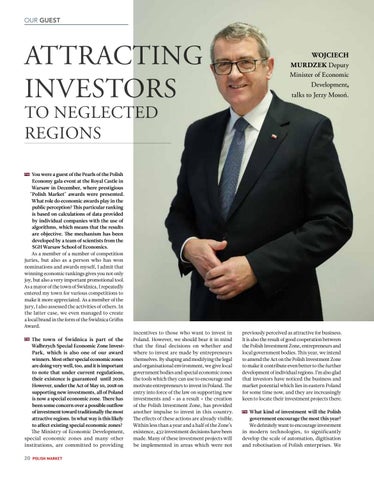 TO NEGLECTED REGIONS You were a guest of the Pearls of the Polish Economy gala event at the Royal Castle in Warsaw in December, where prestigious "Polish Market" awards were presented. What role do economic awards play in the public perception? This particular ranking is based on calculations of data provided by individual companies with the use of algorithms, which means that the results are objective. The mechanism has been developed by a team of scientists from the SGH Warsaw School of Economics. As a member of a number of competition juries, but also as a person who has won nominations and awards myself, I admit that winning economic rankings gives you not only joy, but also a very important promotional tool. As a mayor of the town of Świdnica, I repeatedly entered my town for various competitions to make it more appreciated. As a member of the jury, I also assessed the activities of others. In the latter case, we even managed to create a local brand in the form of the Świdnica Griffin Award. PM

incentives to those who want to invest in Poland. However, we should bear it in mind that the final decisions on whether and where to invest are made by entrepreneurs themselves. By shaping and modifying the legal and organisational environment, we give local government bodies and special economic zones the tools which they can use to encourage and motivate entrepreneurs to invest in Poland. The entry into force of the law on supporting new investments and - as a result - the creation of the Polish Investment Zone, has provided another impulse to invest in this country. The effects of these actions are already visible. Within less than a year and a half of the Zone’s existence, 432 investment decisions have been made. Many of these investment projects will be implemented in areas which were not

previously perceived as attractive for business. It is also the result of good cooperation between the Polish Investment Zone, entrepreneurs and local government bodies. This year, we intend to amend the Act on the Polish Investment Zone to make it contribute even better to the further development of individual regions. I’m also glad that investors have noticed the business and market potential which lies in eastern Poland for some time now, and they are increasingly keen to locate their investment projects there. What kind of investment will the Polish government encourage the most this year? We definitely want to encourage investment in modern technologies, to significantly develop the scale of automation, digitisation and robotisation of Polish enterprises. We PM

The town of Świdnica is part of the Wałbrzych Special Economic Zone InvestPark, which is also one of our award winners. Most other special economic zones are doing very well, too, and it is important to note that under current regulations, their existence is guaranteed until 2026. However, under the Act of May 10, 2018 on supporting new investments, all of Poland is now a special economic zone. There has been some concern over a possible outflow of investment toward traditionally the most attractive regions. In what way is this likely to affect existing special economic zones? The Ministry of Economic Development, special economic zones and many other institutions, are committed to providing PM