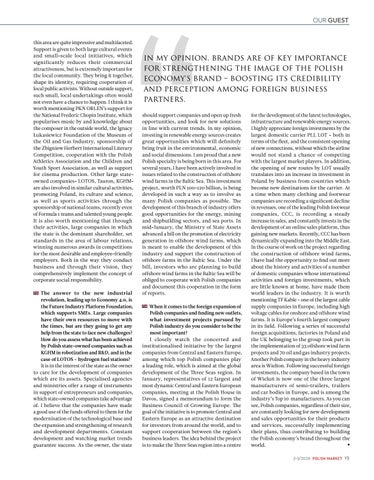 OUR GUEST this area are quite impressive and multifaceted. Support is given to both large cultural events and small-scale local initiatives, which significantly reduces their commercial attractiveness, but is extremely important for the local community. They bring it together, shape its identity, requiring cooperation of local public activists. Without outside support, such small, local undertakings often would not even have a chance to happen. I think it is worth mentioning PKN ORLEN’s support for the National Frederic Chopin Institute, which popularises music by and knowledge about the composer in the outside world, the Ignacy Łukasiewicz Foundation of the Museum of the Oil and Gas Industry, sponsorship of the Zbigniew Herbert International Literary Competition, cooperation with the Polish Athletics Association and the Children and Youth Sport Association, as well as support for cinema production. Other large stateowned companies- LOTOS, Tauron, KGHMare also involved in similar cultural activities, promoting Poland, its culture and science, as well as sports activities through the sponsorship of national teams, recently even of Formula 1 teams and talented young people. It is also worth mentioning that through their activities, large companies in which the state is the dominant shareholder, set standards in the area of labour relations, winning numerous awards in competitions for the most desirable and employee-friendly employers. Both in the way they conduct business and through their vision, they comprehensively implement the concept of corporate social responsibility. The answer to the new industrial revolution, leading up to Economy 4.0, is the Future Industry Platform Foundation, which supports SMEs. Large companies have their own resources to move with the times, but are they going to get any help from the state to face new challenges? How do you assess what has been achieved by Polish state-owned companies such as KGHM in robotization and R&D, and in the case of LOTOS - hydrogen fuel stations? It is in the interest of the state as the owner to care for the development of companies which are its assets. Specialised agencies and ministries offer a range of instruments in support of entrepreneurs and companies, which state-owned companies take advantage of. I believe that the companies have made a good use of the funds offered to them for the modernisation of the technological base and the expansion and strengthening of research and development departments. Constant development and watching market trends guarantee success. As the owner, the state PM

IN MY OPINION, BRANDS ARE OF KEY IMPORTANCE FOR STRENGTHENING THE IMAGE OF THE POLISH ECONOMY'S BRAND – BOOSTING ITS CREDIBILITY AND PERCEPTION AMONG FOREIGN BUSINESS PARTNERS. should support companies and open up fresh opportunities, and look for new solutions in line with current trends. In my opinion, investing in renewable energy sources creates great opportunities which will definitely bring fruit in the environmental, economic and social dimensions. I am proud that a new Polish specialty is being born in this area. For several years, I have been actively involved in issues related to the construction of offshore wind farms in the Baltic Sea. This investment project, worth PLN 100-120 billion, is being developed in such a way as to involve as many Polish companies as possible. The development of this branch of industry offers good opportunities for the energy, mining and shipbuilding sectors, and sea ports. In mid-January, the Ministry of State Assets advanced a bill on the promotion of electricity generation in offshore wind farms, which is meant to enable the development of this industry and support the construction of offshore farms in the Baltic Sea. Under the bill, investors who are planning to build offshore wind farms in the Baltic Sea will be obliged to cooperate with Polish companies and document this cooperation in the form of reports. When it comes to the foreign expansion of Polish companies and finding new outlets, what investment projects pursued by Polish industry do you consider to be the most important? I closely watch the concerted and institutionalised initiative by the largest companies from Central and Eastern Europe, among which top Polish companies play a leading role, which is aimed at the global development of the Three Seas region. In January, representatives of 12 largest and most dynamic Central and Eastern European companies, meeting at the Polish House in Davos, signed a memorandum to form the Business Council of Growing Europe. The goal of the initiative is to promote Central and Eastern Europe as an attractive destination for investors from around the world, and to support cooperation between the region’s business leaders. The idea behind the project is to make the Three Seas region into a centre PM

for the development of the latest technologies, infrastructure and renewable energy sources. I highly appreciate foreign investments by the largest domestic carrier PLL LOT - both in terms of the fleet, and the consistent opening of new connections, without which the airline would not stand a chance of competing with the largest market players. In addition, the opening of new routes by LOT usually translates into an increase in investment in Poland by business from countries which become new destinations for the carrier. At a time when many clothing and footwear companies are recording a significant decline in revenues, one of the leading Polish footwear companies, CCC, is recording a steady increase in sales, and constantly invests in the development of an online sales platform, thus gaining new markets. Recently, CCC has been dynamically expanding into the Middle East. In the course of work on the project regarding the construction of offshore wind farms, I have had the opportunity to find out more about the history and activities of a number of domestic companies whose international activities and foreign investments, which are little known at home, have made them world leaders in the industry. It is worth mentioning TF Kable - one of the largest cable supply companies in Europe, including high voltage cables for onshore and offshore wind farms. It is Europe’s fourth largest company in its field. Following a series of successful foreign acquisitions, factories in Poland and the UK belonging to the group took part in the implementation of 33 offshore wind farm projects and 70 oil and gas industry projects. Another Polish company in the heavy industry area is Wielton. Following successful foreign investments, the company based in the town of Wieluń is now one of the three largest manufacturers of semi-trailers, trailers and car bodies in Europe, and is among the industry’s Top 10 manufacturers. As you can see, Polish companies, regardless of their size, are constantly looking for new development and sales opportunities for their products and services, successfully implementing their plans, thus contributing to building the Polish economy’s brand throughout the • world. 2-3/2020 polish market