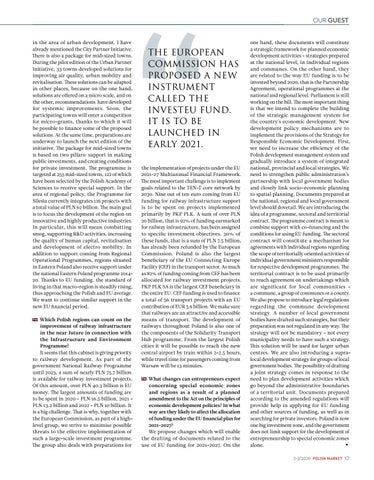 OUR GUEST in the area of urban development. I have already mentioned the City Partner Initiative. There is also a package for mid-sized towns. During the pilot edition of the Urban Partner Initiative, 33 towns developed solutions for improving air quality, urban mobility and revitalisation. These solutions can be adapted in other places, because on the one hand, solutions are offered on a micro scale, and on the other, recommendations have developed for systemic improvements. Soon, the participating towns will enter a competition for micro-grants, thanks to which it will be possible to finance some of the proposed solutions. At the same time, preparations are underway to launch the next edition of the initiative. The package for mid-sized towns is based on two pillars: support in making public investments, and creating conditions for private investment. The programme is targeted at 255 mid-sized towns, 122 of which have been selected by the Polish Academy of Sciences to receive special support. In the area of regional policy, the Programme for Silesia currently integrates 116 projects with a total value of PLN 62 billion. The main goal is to focus the development of the region on innovative and highly productive industries. In particular, this will mean combatting smog, supporting R&D activities, increasing the quality of human capital, revitalisation and development of electro mobility. In addition to support coming from Regional Operational Programmes, regions situated in Eastern Poland also receive support under the national Eastern Poland programme 201420. Thanks to EU funding, the standard of living in that macro-region is steadily rising, thus approaching the Polish and EU average. We want to continue similar support in the new EU financial period. Which Polish regions can count on the improvement of railway infrastructure in the near future in connection with the Infrastructure and Environment Programme? It seems that this cabinet is giving priority to railway development. As part of the government National Railway Programme until 2023, a sum of nearly PLN 75.7 billion is available for railway investment projects. Of this amount, over PLN 40.3 billion is EU money. The largest amounts of funding are to be spent in 2020 - PLN 16.5 billion, 2021 PLN 13.2 billion and 2022 - PLN 10 billion. It is a big challenge. That is why, together with the European Commission, as part of a highlevel group, we strive to minimise possible threats to the effective implementation of such a large-scale investment programme. The group also deals with preparations for PM

THE EUROPEAN COMMISSION HAS PROPOSED A NEW INSTRUMENT CALLED THE INVESTEU FUND. IT IS TO BE LAUNCHED IN EARLY 2021. the implementation of projects under the EU 2021-27 Multiannual Financial Framework. The most important challenge is to implement goals related to the TEN-T core network by 2030. Nine out of ten euro coming from EU funding for railway infrastructure support is to be spent on projects implemented primarily by PKP PLK. A sum of over PLN 20 billion, that is 92% of funding earmarked for railway infrastructure, has been assigned to specific investment objectives. 30% of these funds, that is a sum of PLN 7.5 billion, has already been refunded by the European Commission. Poland is also the largest beneficiary of the EU Connecting Europe Facility (CEF) in the transport sector. As much as 82% of funding coming from CEF has been allocated for railway investment projects. PKP PLK SA is the largest CEF beneficiary in the entire EU. CEF funding is used to finance a total of 56 transport projects with an EU contribution of EUR 3.9 billion. We make sure that railways are an attractive and accessible means of transport. The development of railways throughout Poland is also one of the components of the Solidarity Transport Hub programme. From the largest Polish cities it will be possible to reach the new central airport by train within 2-2.5 hours, while travel time for passengers coming from Warsaw will be 15 minutes. What changes can entrepreneurs expect concerning special economic zones and regions as a result of a planned amendment to the Act on the principles of economic development policies? In what way are they likely to affect the allocation of funding under the EU financial plan for 2021-2027? We propose changes which will enable the drafting of documents related to the use of EU funding for 2021-2027. On the PM

one hand, these documents will constitute a strategic framework for planned economic development activities - strategies prepared at the national level, in individual regions and communes. On the other hand, they are related to the way EU funding is to be invested beyond 2020, that is the Partnership Agreement, operational programmes at the national and regional level. Parliament is still working on the bill. The most important thing is that we intend to complete the building of the strategic management system for the country's economic development. New development policy mechanisms are to implement the provisions of the Strategy for Responsible Economic Development. First, we need to increase the efficiency of the Polish development management system and gradually introduce a system of integrated national, provincial and local strategies. We need to strengthen public administrationâ&#x20AC;&#x2122;s partnership with local government bodies and closely link socio-economic planning to spatial planning. Documents prepared at the national, regional and local government level should dovetail. We are introducing the idea of a programme, sectoral and territorial contract. The programme contract is meant to combine support with co-financing and the conditions for using EU funding. The sectoral contract will constitute a mechanism for agreements with individual regions regarding the scope of territorially oriented activities of individual government ministers responsible for respective development programmes. The territorial contract is to be used primarily to reach agreement on undertakings which are significant for local communities a commune, a group of communes or a county. We also propose to introduce legal regulations regarding the commune development strategy. A number of local government bodies have drafted such strategies, but their preparation was not regulated in any way. The strategy will not be mandatory - not every municipality needs to have such a strategy. This solution will be used for larger urban centres. We are also introducing a supralocal development strategy for groups of local government bodies. The possibility of drafting a joint strategy comes in response to the need to plan development activities which go beyond the administrative boundaries of a territorial unit. Documents prepared according to the amended regulations will provide help in applying for EU funding and other sources of funding, as well as in searching for private investors. Poland is now one big investment zone, and the government does not limit support for the development of entrepreneurship to special economic zones alone. â&#x20AC;˘ 2-3/2020 polish market