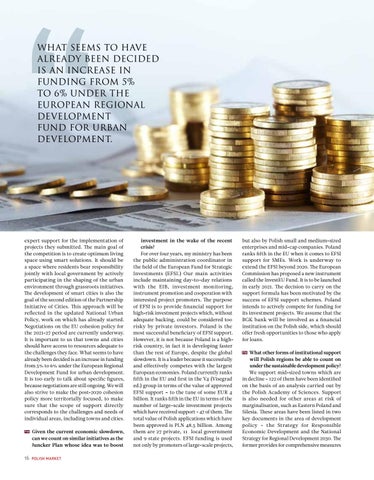 WHAT SEEMS TO HAVE ALREADY BEEN DECIDED IS AN INCREASE IN FUNDING FROM 5% TO 6% UNDER THE EUROPEAN REGIONAL DEVELOPMENT FUND FOR URBAN DEVELOPMENT.

expert support for the implementation of projects they submitted. The main goal of the competition is to create optimum living space using smart solutions. It should be a space where residents bear responsibility jointly with local government by actively participating in the shaping of the urban environment through grassroots initiatives. The development of smart cities is also the goal of the second edition of the Partnership Initiative of Cities. This approach will be reflected in the updated National Urban Policy, work on which has already started. Negotiations on the EU cohesion policy for the 2021-27 period are currently underway. It is important to us that towns and cities should have access to resources adequate to the challenges they face. What seems to have already been decided is an increase in funding from 5% to 6% under the European Regional Development Fund for urban development. It is too early to talk about specific figures, because negotiations are still ongoing. We will also strive to make the post-2020 cohesion policy more territorially focused, to make sure that the scope of support directly corresponds to the challenges and needs of individual areas, including towns and cities. PM

Given the current economic slowdown, can we count on similar initiatives as the Juncker Plan whose idea was to boost

investment in the wake of the recent crisis? For over four years, my ministry has been the public administration coordinator in the field of the European Fund for Strategic Investments (EFSI.) Our main activities include maintaining day-to-day relations with the EIB, investment monitoring, instrument promotion and cooperation with interested project promoters. The purpose of EFSI is to provide financial support for high-risk investment projects which, without adequate backing, could be considered too risky by private investors. Poland is the most successful beneficiary of EFSI support. However, it is not because Poland is a highrisk country, in fact it is developing faster than the rest of Europe, despite the global slowdown. It is a leader because it successfully and effectively competes with the largest European economies. Poland currently ranks fifth in the EU and first in the V4 (Visegrad ed.) group in terms of the value of approved EFSI support – to the tune of some EUR 4 billion. It ranks fifth in the EU in terms of the number of large-scale investment projects which have received support - 47 of them. The total value of Polish applications which have been approved is PLN 48.5 billion. Among them are 27 private, 11 local government and 9 state projects. EFSI funding is used not only by promoters of large-scale projects,

but also by Polish small and medium-sized enterprises and mid-cap companies. Poland ranks fifth in the EU when it comes to EFSI support for SMEs. Work is underway to extend the EFSI beyond 2020. The European Commission has proposed a new instrument called the InvestEU Fund. It is to be launched in early 2021. The decision to carry on the support formula has been motivated by the success of EFSI support schemes. Poland intends to actively compete for funding for its investment projects. We assume that the BGK bank will be involved as a financial institution on the Polish side, which should offer fresh opportunities to those who apply for loans. What other forms of institutional support will Polish regions be able to count on under the sustainable development policy? We support mid-sized towns which are in decline - 122 of them have been identified on the basis of an analysis carried out by the Polish Academy of Sciences. Support is also needed for other areas at risk of marginalisation, such as Eastern Poland and Silesia. These areas have been listed in two key documents in the area of development policy - the Strategy for Responsible Economic Development and the National Strategy for Regional Development 2030. The former provides for comprehensive measures PM