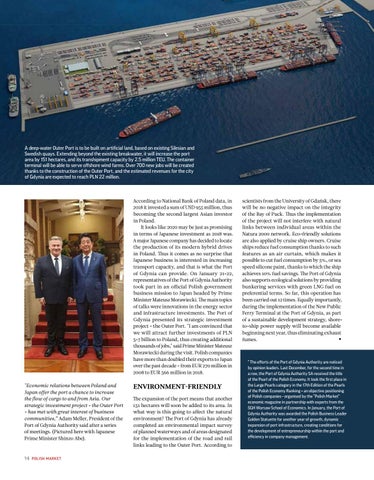 100TH ANNIVERSARY OF THE SYMBOLIC WEDDING TO THE SEA

A deep-water Outer Port is to be built on artificial land, based on existing Silesian and Swedish quays. Extending beyond the existing breakwater, it will increase the port area by 151 hectares, and its transhipment capacity by 2.5 million TEU. The container terminal will be able to serve offshore wind farms. Over 700 new jobs will be created thanks to the construction of the Outer Port, and the estimated revenues for the city of Gdynia are expected to reach PLN 22 million.

According to National Bank of Poland data, in 2018 it invested a sum of USD 955 million, thus becoming the second largest Asian investor in Poland. It looks like 2020 may be just as promising in terms of Japanese investment as 2018 was. A major Japanese company has decided to locate the production of its modern hybrid drives in Poland. Thus it comes as no surprise that Japanese business is interested in increasing transport capacity, and that is what the Port of Gdynia can provide. On January 21-22, representatives of the Port of Gdynia Authority took part in an official Polish government business mission to Japan headed by Prime Minister Mateusz Morawiecki. The main topics of talks were innovations in the energy sector and infrastructure investments. The Port of Gdynia presented its strategic investment project - the Outer Port. "I am convinced that we will attract further investments of PLN 5-7 billion to Poland, thus creating additional thousands of jobs," said Prime Minister Mateusz Morawiecki during the visit. Polish companies have more than doubled their exports to Japan over the past decade - from EUR 270 million in 2008 to EUR 566 million in 2018. "Economic relations between Poland and Japan offer the port a chance to increase the flow of cargo to and from Asia. Our strategic investment project - the Outer Port - has met with great interest of business communities,” Adam Meller, President of the Port of Gdynia Authority said after a series of meetings. (Pictured here with Japanese Prime Minister Shinzo Abe).

ENVIRONMENT-FRIENDLY The expansion of the port means that another 151 hectares will soon be added to its area. In what way is this going to affect the natural environment? The Port of Gdynia has already completed an environmental impact survey of planned waterways and of areas designated for the implementation of the road and rail links leading to the Outer Port. According to

scientists from the University of Gdańsk, there will be no negative impact on the integrity of the Bay of Puck. Thus the implementation of the project will not interfere with natural links between individual areas within the Natura 2000 network. Eco-friendly solutions are also applied by cruise ship owners. Cruise ships reduce fuel consumption thanks to such features as an air curtain, which makes it possible to cut fuel consumption by 5%, or sea speed silicone paint, thanks to which the ship achieves 10% fuel savings. The Port of Gdynia also supports ecological solutions by providing bunkering services with green LNG fuel on preferential terms. So far, this operation has been carried out 12 times. Equally importantly, during the implementation of the New Public Ferry Terminal at the Port of Gdynia, as part of a sustainable development strategy, shoreto-ship power supply will become available beginning next year, thus eliminating exhaust fumes. •