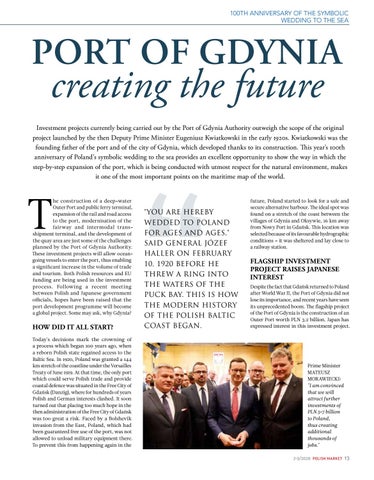 100TH ANNIVERSARY OF THE SYMBOLIC WEDDING TO THE SEA

Investment projects currently being carried out by the Port of Gdynia Authority outweigh the scope of the original project launched by the then Deputy Prime Minister Eugeniusz Kwiatkowski in the early 1920s. Kwiatkowski was the founding father of the port and of the city of Gdynia, which developed thanks to its construction. This year’s 100th anniversary of Poland's symbolic wedding to the sea provides an excellent opportunity to show the way in which the step-by-step expansion of the port, which is being conducted with utmost respect for the natural environment, makes it one of the most important points on the maritime map of the world.

he construction of a deep-water Outer Port and public ferry terminal, expansion of the rail and road access to the port, modernisation of the fairway and intermodal transshipment terminal, and the development of the quay area are just some of the challenges planned by the Port of Gdynia Authority. These investment projects will allow oceangoing vessels to enter the port, thus enabling a significant increase in the volume of trade and tourism. Both Polish resources and EU funding are being used in the investment process. Following a recent meeting between Polish and Japanese government officials, hopes have been raised that the port development programme will become a global project. Some may ask, why Gdynia?

HOW DID IT ALL START? Today's decisions mark the crowning of a process which began 100 years ago, when a reborn Polish state regained access to the Baltic Sea. In 1920, Poland was granted a 144 km stretch of the coastline under the Versailles Treaty of June 1919. At that time, the only port which could serve Polish trade and provide coastal defence was situated in the Free City of Gdańsk (Danzig), where for hundreds of years Polish and German interests clashed. It soon turned out that placing too much hope in the then administration of the Free City of Gdańsk was too great a risk. Faced by a Bolshevik invasion from the East, Poland, which had been guaranteed free use of the port, was not allowed to unload military equipment there. To prevent this from happening again in the

"YOU ARE HEREBY WEDDED TO POLAND FOR AGES AND AGES," SAID GENERAL JÓZEF HALLER ON FEBRUARY 10, 1920 BEFORE HE THREW A RING INTO THE WATERS OF THE PUCK BAY. THIS IS HOW THE MODERN HISTORY OF THE POLISH BALTIC COAST BEGAN.

future, Poland started to look for a safe and secure alternative harbour. The ideal spot was found on a stretch of the coast between the villages of Gdynia and Oksywie, 16 km away from Nowy Port in Gdańsk. This location was selected because of its favourable hydrographic conditions – it was sheltered and lay close to a railway station.

FLAGSHIP INVESTMENT PROJECT RAISES JAPANESE INTEREST Despite the fact that Gdańsk returned to Poland after World War II, the Port of Gdynia did not lose its importance, and recent years have seen its unprecedented boom. The flagship project of the Port of Gdynia is the construction of an Outer Port worth PLN 3.2 billion. Japan has expressed interest in this investment project.

Prime Minister MATEUSZ MORAWIECKI: "I am convinced that we will attract further investments of PLN 5-7 billion to Poland, thus creating additional thousands of jobs." 2-3/2020 polish market