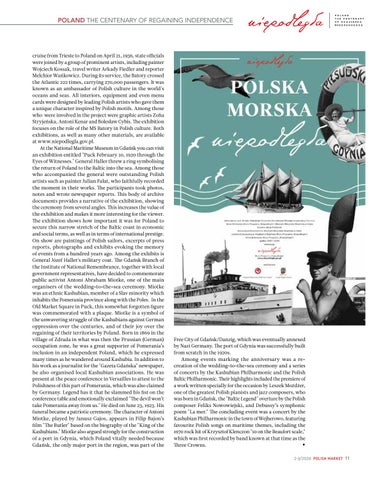 POLAND THE CENTENARY OF REGAINING INDEPENDENCE

cruise from Trieste to Poland on April 21, 1936, state officials were joined by a group of prominent artists, including painter Wojciech Kossak, travel writer Arkady Fiedler and reporter Melchior Wańkowicz. During its service, the Batory crossed the Atlantic 222 times, carrying 270,000 passengers. It was known as an ambassador of Polish culture in the world's oceans and seas. All interiors, equipment and even menu cards were designed by leading Polish artists who gave them a unique character inspired by Polish motifs. Among those who were involved in the project were graphic artists Zofia Stryjeńska, Antoni Kenar and Bolesław Cybis. The exhibition focuses on the role of the MS Batory in Polish culture. Both exhibitions, as well as many other materials, are available at www.niepodlegla.gov.pl. At the National Maritime Museum in Gdańsk you can visit an exhibition entitled "Puck February 10, 1920 through the Eyes of Witnesses." General Haller threw a ring symbolising the return of Poland to the Baltic into the sea. Among those who accompanied the general were outstanding Polish artists such as painter Julian Fałat, who faithfully recorded the moment in their works. The participants took photos, notes and wrote newspaper reports. This body of archive documents provides a narrative of the exhibition, showing the ceremony from several angles. This increases the value of the exhibition and makes it more interesting for the viewer. The exhibition shows how important it was for Poland to secure this narrow stretch of the Baltic coast in economic and social terms, as well as in terms of international prestige. On show are paintings of Polish sailors, excerpts of press reports, photographs and exhibits evoking the memory of events from a hundred years ago. Among the exhibits is General Józef Haller's military coat. The Gdańsk Branch of the Institute of National Remembrance, together with local government representatives, have decided to commemorate public activist Antoni Abraham Miotke, one of the main organisers of the wedding-to-the-sea ceremony. Miotke was an ethnic Kashubian, member of a Slav minority which inhabits the Pomerania province along with the Poles. In the Old Market Square in Puck, this somewhat forgotten figure was commemorated with a plaque. Miotke is a symbol of the unwavering struggle of the Kashubians against German oppression over the centuries, and of their joy over the regaining of their territories by Poland. Born in 1869 in the village of Zdrada in what was then the Prussian (German) occupation zone, he was a great supporter of Pomerania’s inclusion in an independent Poland, which he expressed many times as he wandered around Kashubia. In addition to his work as a journalist for the "Gazeta Gdańska" newspaper, he also organised local Kashubian associations. He was present at the peace conference in Versailles to attest to the Polishness of this part of Pomerania, which was also claimed by Germany. Legend has it that he slammed his fist on the conference table and emotionally exclaimed "The devil won’t take Pomerania away from us." He died on June 23, 1923. His funeral became a patriotic ceremony. The character of Antoni Miotke, played by Janusz Gajos, appears in Filip Bajon’s film "The Butler" based on the biography of the "King of the Kashubians." Miotke also argued strongly for the construction of a port in Gdynia, which Poland vitally needed because Gdańsk, the only major port in the region, was part of the

Free City of Gdańsk/Danzig, which was eventually annexed by Nazi Germany. The port of Gdynia was successfully built from scratch in the 1920s. Among events marking the anniversary was a recreation of the wedding-to-the-sea ceremony and a series of concerts by the Kashubian Philharmonic and the Polish Baltic Philharmonic. Their highlights included the premiere of a work written specially for the occasion by Leszek Możdżer, one of the greatest Polish pianists and jazz composers, who was born in Gdańsk, the "Baltic Legend" overture by the Polish composer Feliks Nowowiejski, and Debussy’s symphonic poem "La mer." The concluding event was a concert by the Kashubian Philharmonic in the town of Wejherowo, featuring favourite Polish songs on maritime themes, including the 1970 rock hit of Krzysztof Klenczon "10 on the Beaufort scale," which was first recorded by band known at that time as the • Three Crowns. 2-3/2020 polish market