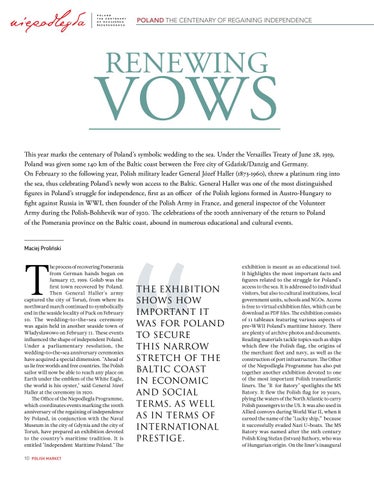 POLAND THE CENTENARY OF REGAINING INDEPENDENCE

VOWS This year marks the centenary of Poland’s symbolic wedding to the sea. Under the Versailles Treaty of June 28, 1919, Poland was given some 140 km of the Baltic coast between the Free city of Gdańsk/Danzig and Germany. On February 10 the following year, Polish military leader General Józef Haller (1873-1960), threw a platinum ring into the sea, thus celebrating Poland’s newly won access to the Baltic. General Haller was one of the most distinguished figures in Poland’s struggle for independence, first as an officer of the Polish legions formed in Austro-Hungary to fight against Russia in WWI, then founder of the Polish Army in France, and general inspector of the Volunteer Army during the Polish-Bolshevik war of 1920. The celebrations of the 100th anniversary of the return to Poland of the Pomerania province on the Baltic coast, abound in numerous educational and cultural events.

he process of recovering Pomerania from German hands began on January 17, 1919. Golub was the first town recovered by Poland. Then General Haller's army captured the city of Toruń, from where its northward march continued to symbolically end in the seaside locality of Puck on February 10. The wedding-to-the-sea ceremony was again held in another seaside town of Władysławowo on February 11. These events influenced the shape of independent Poland. Under a parliamentary resolution, the wedding-to-the-sea anniversary ceremonies have acquired a special dimension. "Ahead of us lie free worlds and free countries. The Polish sailor will now be able to reach any place on Earth under the emblem of the White Eagle, the world is his oyster," said General Józef Haller at the ceremony in 1920. The Office of the Niepodległa Programme, which coordinates events marking the 100th anniversary of the regaining of independence by Poland, in conjunction with the Naval Museum in the city of Gdynia and the city of Toruń, have prepared an exhibition devoted to the country’s maritime tradition. It is entitled "Independent Maritime Poland." The

THE EXHIBITION SHOWS HOW IMPORTANT IT WAS FOR POLAND TO SECURE THIS NARROW STRETCH OF THE BALTIC COAST IN ECONOMIC AND SOCIAL TERMS, AS WELL AS IN TERMS OF INTERNATIONAL PRESTIGE.

exhibition is meant as an educational tool. It highlights the most important facts and figures related to the struggle for Poland's access to the sea. It is addressed to individual visitors, but also to cultural institutions, local government units, schools and NGOs. Access is free to virtual exhibition files, which can be download as PDF files. The exhibition consists of 11 tableaux featuring various aspects of pre-WWII Poland’s maritime history. There are plenty of archive photos and documents. Reading materials tackle topics such as ships which flew the Polish flag, the origins of the merchant fleet and navy, as well as the construction of port infrastructure. The Office of the Niepodległa Programme has also put together another exhibition devoted to one of the most important Polish transatlantic liners. The "B for Batory" spotlights the MS Batory. It flew the Polish flag for 19 years, plying the waters of the North Atlantic to carry Polish passengers to the US. It was also used in Allied convoys during World War II, when it earned the name of the "Lucky ship,” because it successfully evaded Nazi U-boats. The MS Batory was named after the 16th century Polish King Stefan (Istvan) Bathory, who was of Hungarian origin. On the liner’s inaugural