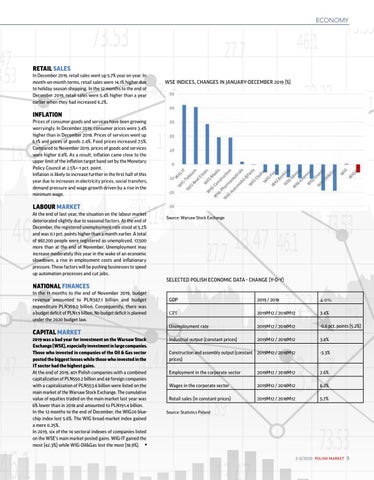 INFLATION Prices of consumer goods and services have been growing worryingly. In December 2019, consumer prices were 3.4% higher than in December 2018. Prices of services went up 6.1% and prices of goods 2.4%. Food prices increased 7.5%. Compared to November 2019, prices of goods and services were higher 0.8%. As a result, inflation came close to the upper limit of the inflation target band set by the Monetary Policy Council at 2.5%+-1 pct. point. Inflation is likely to increase further in the first half of this year due to increases in electricity prices, social transfers, demand pressure and wage growth driven by a rise in the minimum wage.

LABOUR MARKET At the end of last year, the situation on the labour market deteriorated slightly due to seasonal factors. At the end of December, the registered unemployment rate stood at 5.2% and was 0.1 pct. points higher than a month earlier. A total of 867,200 people were registered as unemployed, 17,500 more than at the end of November. Unemployment may increase moderately this year in the wake of an economic slowdown, a rise in employment costs and inflationary pressure. These factors will be pushing businesses to speed up automation processes and cut jobs.

NATIONAL FINANCES In the 11 months to the end of November 2019, budget revenue amounted to PLN367.1 billion and budget expenditure PLN369.0 billion. Consequently, there was a budget deficit of PLN1.9 billion. No budget deficit is planned under the 2020 budget law.

CAPITAL MARKET 2019 was a bad year for investment on the Warsaw Stock Exchange (WSE), especially investment in large companies. Those who invested in companies of the Oil & Gas sector posted the biggest losses while those who invested in the IT sector had the highest gains. At the end of 2019, 401 Polish companies with a combined capitalization of PLN550.2 billion and 48 foreign companies with a capitalization of PLN553.6 billion were listed on the main market of the Warsaw Stock Exchange. The cumulative value of equities traded on the main market last year was 6% lower than in 2018 and amounted to PLN191.4 billion. In the 12 months to the end of December, the WIG20 bluechip index lost 5.6%. The WIG broad-market index gained a mere 0.25%. In 2019, six of the 14 sectoral indexes of companies listed on the WSEâ&#x20AC;&#x2122;s main market posted gains. WIG-IT gained the most (42.3%) while WIG-Oil&Gas lost the most (18.9%). â&#x20AC;˘

Employment in the corporate sector

Wages in the corporate sector