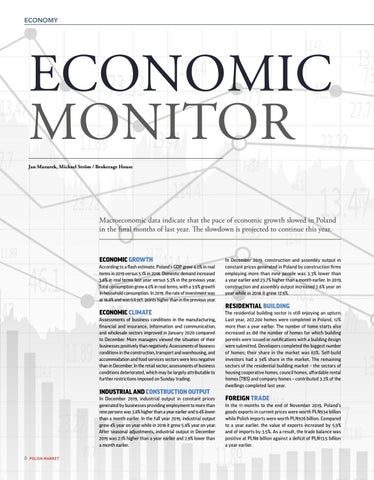 Macroeconomic data indicate that the pace of economic growth slowed in Poland in the final months of last year. The slowdown is projected to continue this year.

RESIDENTIAL BUILDING The residential building sector is still enjoying an upturn. Last year, 207,200 homes were completed in Poland, 12% more than a year earlier. The number of home starts also increased as did the number of homes for which building permits were issued or notifications with a building design were submitted. Developers completed the biggest number of homes; their share in the market was 63%. Self-build investors had a 34% share in the market. The remaining sectors of the residential building market – the sectors of housing cooperative homes, council homes, affordable rental homes (TBS) and company homes – contributed 3.2% of the dwellings completed last year.

FOREIGN TRADE In the 11 months to the end of November 2019, Poland’s goods exports in current prices were worth PLN934 billion while Polish imports were worth PLN926 billion. Compared to a year earlier, the value of exports increased by 5.9% and of imports by 3.5%. As a result, the trade balance was positive at PLN8 billion against a deficit of PLN13.5 billion a year earlier.