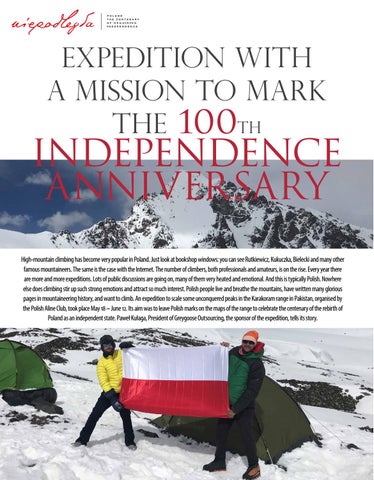 EXPEDITION WITH A MISSION TO MARK THE 100TH

INDEPENDENCE ANNIVERSARY High-mountain climbing has become very popular in Poland. Just look at bookshop windows: you can see Rutkiewicz, Kukuczka, Bielecki and many other famous mountaineers. The same is the case with the Internet. The number of climbers, both professionals and amateurs, is on the rise. Every year there are more and more expeditions. Lots of public discussions are going on, many of them very heated and emotional. And this is typically Polish. Nowhere else does climbing stir up such strong emotions and attract so much interest. Polish people live and breathe the mountains, have written many glorious pages in mountaineering history, and want to climb. An expedition to scale some unconquered peaks in the Karakoram range in Pakistan, organised by the Polish Aline Club, took place May 18 – June 12. Its aim was to leave Polish marks on the maps of the range to celebrate the centenary of the rebirth of Poland as an independent state. Paweł Kułaga, President of Greygoose Outsourcing, the sponsor of the expedition, tells its story.

Published on Jul 13, 2017 "Polish Market” is a prestigious English-language magazine published since 1996. In its pages, it promotes the Pol...

Published on Jul 13, 2017 "Polish Market” is a prestigious English-language magazine published since 1996. In its pages, it promotes the Pol...