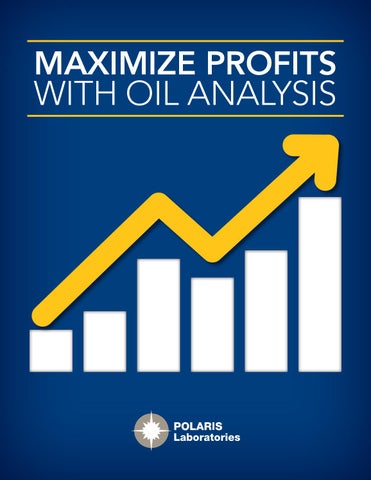 A traditional maintenance program investigates an underperforming diesel engine and discovers massive cylinder region wear. They determine the liners, pistons and rings all need to be replaced, and they’re grateful it didn’t seize up or throw a rod. The engine will be down for a week as new parts are shipped in and repairs are made. All in all, it’s an expensive repair, but that’s the cost of doing business in a dusty environment.

SCENARIO 2 Letâ&amp;#x20AC;&amp;#x2122;s run that same scenario if the company fully integrated oil analysis into its maintenance program. The program champion knows his equipment is exposed to a lot of dust, so he keeps an eye out for high silicon levels. Six months before the previous scenario, a engineâ&amp;#x20AC;&amp;#x2122;s sample result shows a spike in silicon and the program champion schedules downtime to change the oil the next day. His records show the last PM included an air filter change, so he adds a note to check the air system. Sure enough, the air filter wasnâ&amp;#x20AC;&amp;#x2122;t seated properly and dust was getting sucked into the engine. 3

The difference between the two scenarios was a major overhaul compared to an oil change. All of the money spent on the repairs took away from the company’s profit and they lost four days of productivity from that engine. The worst part is, the first scenario didn’t find the root cause of the problem – the air filter.

Oil analysis can improve equipment reliability, lower repair costs and increase productivity, but only if it is as an integral part of a maintenance program. To see how your program matches up to its potential, take the short self-assessment in our Taking Action Workbook.