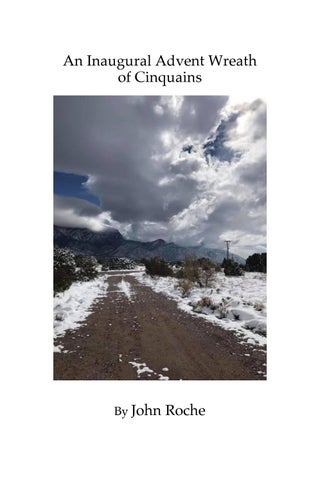 (Counting down the days and hours)

These 56 poems appeared daily on Facebook from Thanksgiving Day 2020 to January 20, 2021 as a countdown to the Inauguration of Joseph Biden and Kamala Harris

Resuming, marching, ever in darkness marching, on in the ranks, The unknown road still marching. —Walt Whitman, “A March in the Ranks Hard-Prest, and the Road Unknown”

52 Days * The Bidens get a First Cat to join their First Dogs while Trump “wags the dog” Will Iran bite back or bide its time? ***

47 Days * Mystery Monolith dismantled by MAGATS shouting, “Christ is King here. We don’t want no aliens from Mexico or outer space!” Apparently not a Borat skit. ***

45 Days * Turns out, Rudy’s word-slurring witness is an actress Rudy knows, the madder the show the more the rubes’ll pay ***

42 Days * “Safe Harbor” for Electoral College, reached, but no Safe Harbor for American Democracy. Maybe a temporary stop to repair and reprovision, then outward bound, “Now, voyager, sail thou forth...” ***

41 Days * Will Shakespeare of Warwickshire was the first man vaccinated in England at Coventry, just 20 miles north of Stratford-on-Avon “It could make a difference to our lives from now on, couldn’t it?” Mr. Shakespeare, 81, said ***

40 Days and 40 Nights * The ghouls keep returning from the dead— Trump, Cain, Rudy, ghastly Grassley, Rand Paul, RonJohn, Kellyanne and Kayleigh— after their secret treatments and a healthy infusion of virgin’s blood ***

38 Days * Another Saturday “Stop the Steal” rally in D.C. Even though SCOTUS shot down their last appeal Trump fans chant, “Destroy the G.O.P.&quot; Maskless Virginia Congressman calls COVID a hoax There’s no vaccine against stupid ***

37 Days * Electoral College meets to certify Biden’s victory Ordinarily routine, but today armed bodyguards Boogaloo thugs and Proud Boy goons aren’t the worst danger— The disdain of so many elected officials for the oath they swore to defend democracy Another test of the nation’s long endurance ***

34 Days * “It didn’t happen here” doesn’t mean it couldn’t 74 million Americans willingly embraced a despot narrowly thwarted by 81 million and a few honest judges But what about next time? ***

33 Days * Deb Haaland is Joe’s pick for Interior First Native American cabinet member First Indian to oversee the Bureau of Indian Affairs and the National parks and wildernesses First to realize this land is not a “resource” to be exploited, but a sacred bond ***

31 Days * A year ago, Adam Schiff asked how much damage Trump could do between then and the Election Now we know horrors no one could have fathomed And we ask the question “How much damage can he do in a month?” ***

29 Days * More plotting, more suing, more losing Another maskless Mar-a-Lago gala Trump asks how he can get his name on an airport It helps to die first— Hurry up, Donald! ***

28 Days * Trump more like Captain Queeg by the day Too crazy even for Pat Robertson Thinks everyoneâ&amp;#x20AC;&amp;#x2122;s out to get him, even Pence Et tu, Mitch? Can he even trust Ivanka? ***

27 Days * Pardons for crooks, war criminals, and co-conspirators Pardons galore for those who pay Ignore the dead Iraqi civilians Ignore all the victims of these criminals Russian probe? What Russian probe? ***

26 Days * Bob Mueller, poor clerk; Adam Schiff, likewise What have they to eat this Trumpmas but humble pie while pardoned felons rejoice? Ah, but the Ghost of Trumpmas Yet to Come has yet to cross the threshold ***

24 Days * Joe Biden, remember him? Joe’s going to be President quite soon No, that’s not Fake News nor promised French hens Joe and Kamala will be running things in 24 days— Deal with it! ***

23 Days * Another day another attempt to ignore the Golfer-in-Chief What should this poem be about? How ‘bout pies? Pumpkin, apple, pecan Maybe four calling birds or the slaughtered Holy Innocents? ***

18 Days * Little Marco, Lazy Lindsey, and Joni Ernst (The Three Mask-Scoffeteers) cut in line to be first for the vaccine Fried Gohmert’s danced out of court The Amazing Mitch performs a prestidigitation ***

15 Days * Twelve drummers drumming and eleven pipers piping couldn’t drill through your thick skull Here’s an Epiphany for you, Donnie Boy: You lost! ***

13 Days * Yesterday’s astonishing Epiphany Not only did armed insurrectionists ransack the Capitol but Mike Pence thrice defied his master To 25th or not to 25th? That is the question for Mike and Mitch ***

10 Days Out * “Ten Days of Darkness” the Neo-Nazis threaten So it may be a bumpy ride but we’ve survived four years of darkness and we persisted! ***

9 Days * Zip Tie Guy, Q Shaman and Bigo Barnett arrested Will Baked Alaska be next? Gotham City and the Capital appear safe for now But if this is the last 15 minutes of the flick we can expect The Joker to escape ***

8 Days * Impeach him again Make him a 2-time loser! Officially “Worst President ever” But it won’t bring back 400,000 dead nor help those infected by his maskless mob ***

7 Days in January (one week out) * Goldman Sachs, Amazon, Ford, Comcast, the Chamber of Commerce, Wall Street Journal, even Walmart turn on Trump Corporate America freezes out the Seditionists Mitch sniffs the air, casts no shadow ***

6 Days Out * 2nd Impeachment debate Kilroy noses flop over masks as Republicans blame Antifa and BLM or ask for “unity” and no-blame “forgiveness” What, me worry? ***

5 Days to Go * Trump in his jammies, neck in the noose Aides and appointees say “Been good to know you!” as they head out the White House door carrying paintings or boxes of personal effects Mover’s iPod plays Cash’s “25 Minutes to Go” ***

4 Days Out * The “MyPillow” guy meets with Trump to advise him on how to declare martial law That’s what I said—in the Oval Office Like, for real I’m going back to bed—Wake me on the 20th! ***

1 Day Left * All the lonely sycophants where will they all go to? All the grifting piggies left to simmer in their own stew But oh-so-bored Melania is happy to go ***