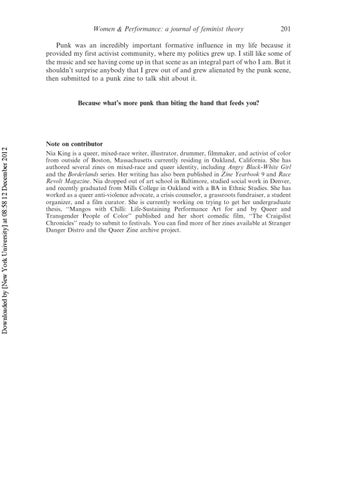 Punk was an incredibly important formative influence in my life because it provided my first activist community, where my politics grew up. I still like some of the music and see having come up in that scene as an integral part of who I am. But it shouldn’t surprise anybody that I grew out of and grew alienated by the punk scene, then submitted to a punk zine to talk shit about it.

Because what’s more punk than biting the hand that feeds you?

Note on contributor Nia King is a queer, mixed-race writer, illustrator, drummer, filmmaker, and activist of color from outside of Boston, Massachusetts currently residing in Oakland, California. She has authored several zines on mixed-race and queer identity, including Angry Black-White Girl and the Borderlands series. Her writing has also been published in Zine Yearbook 9 and Race Revolt Magazine. Nia dropped out of art school in Baltimore, studied social work in Denver, and recently graduated from Mills College in Oakland with a BA in Ethnic Studies. She has worked as a queer anti-violence advocate, a crisis counselor, a grassroots fundraiser, a student organizer, and a film curator. She is currently working on trying to get her undergraduate thesis, ‘‘Mangos with Chilli: Life-Sustaining Performance Art for and by Queer and Transgender People of Color’’ published and her short comedic film, ‘‘The Craigslist Chronicles’’ ready to submit to festivals. You can find more of her zines available at Stranger Danger Distro and the Queer Zine archive project.

issue 22.2-3 of Women & Performance: a journal of feminist theory and was co-edited by Beth Stinson and Fiona I.B. Ngô. 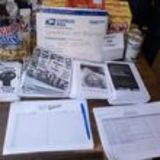