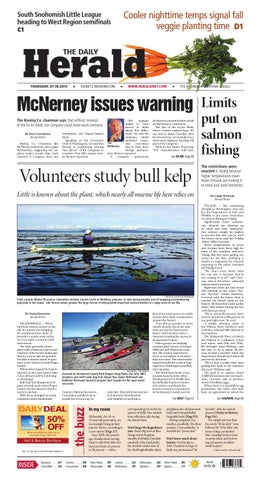 McNerney issues warning The Boeing Co. chairman says that without renewal of the Ex-Im Bank, the company could move work overseas. By Dan Catchpole Herald Writer

reauthorize the Export-Import Bank. Speaking at the Economic Club of Washington, he said that Boeing is considering moving “key pieces” of the company to countries that offer export credits, Reuters reported.

The airplane maker is “now forced to think about this differently,” he told the audience, which included corpoJim rate executives McNerney and at least three foreign ambassadors, Reuters reported. A company spokesman

declined to provide further detail on McNerney’s comments. The fate of the Ex-Im Bank, whose charter expired June 30, was left in limbo Tuesday after its renewal was not included in a short-term highway funding bill passed by Congress. Without the bank’s financing, “U.S. manufacturers will have See EX-IM, Page A8

The restrictions were enacted in Tulalip because higher temperatures mean fewer chinook are making it to tribal and state hatcheries.

Little is known about the plant, which nearly all marine life here relies on

first-of-its-kind survey, in collaboration with other communities around the Sound. “I see this as a project to more clearly identify where the kelp beds are and to characterize them,” said Lincoln Loehr, a volunteer leading the survey in Snohomish County. Other groups are helping conduct pilot surveys in Island, Jefferson and Whatcom counties. The work is expected to serve as a template to monitor kelp over time. The information should benefit the work of kelp experts in Washington and British Columbia. The Northwest Straits Commission launched the effort. Headquartered in Padilla Bay, the federally funded commission advises and funds the marine resources committees in Snohomish County and six

TULALIP — The continuing drought in Washington state has led the Department of Fish and Wildlife to put more restrictions on salmon fishing in Tulalip. Significantly fewer summerrun chinook are showing up in tribal and state hatcheries. Any salmon caught by anglers is one less fish that can be used for brood stock, said the Tulalip Tribes’ Mike Crewson. Water temperatures in rivers and streams have been high for most of the summer, and now Tulalip Bay has been getting too warm for the fish, providing a barrier to migration for chinook returning to the tribes’ hatchery off Tulalip Creek. “We don’t even know what the run size is because they’re not coming in at all,” said Crewson, who is the tribes’ salmonid enhancement scientist. Right now there are only about 150 chinook in the tribes’ Bernie “Kai-Kai” Gobin Hatchery, Crewson said, far below what is needed for brood stock in the fishery. All those fish came up the tribes’ fish ladder during the few cool days last week. “We’re about 80 percent short and we should be at 80 percent of our goal right now,” he said. A similar situation exists at the Wallace River Hatchery near Gold Bar, with just 600 chinook at the hatchery. The Skykomish River, of which the Wallace is a tributary, is low and warm, said Fish and Wildlife biologist Jenni Whitney, and the take so far is about 50 percent of what’s needed, when the department should have taken 60 percent by this time. “We’ve had a really hard time getting fish back to the hatchery this year,” Whitney said. The goal is to capture about 3,500 fish between the two hatcheries, Crewson said, to produce about 4.8 million eggs. When there is a shortfall in egg production, the tribes and state have an agreement in which the

Go to HeraldNetDailyDeal.com to purchase today’s deal from

MEADOWDALE — When bull kelp washes ashore in the fall, it’s almost too tempting for any kid to leave alone. It provides a ready-made whip or, if cut right, a natural wind instrument. The slick, greenish-brown plant with a bulbous end is such a feature of the beach landscape that it’s easy to take for granted. Yet little is known about its presence in the waters of north Puget Sound. Where does it grow? Is it growing back in the same places after it dies off each fall? Is it thriving or declining? Bull kelp has disappeared in parts of south and central Puget Sound, but the situation farther north is unclear. With those thoughts in mind, volunteers from Snohomish

mid-July. They left from beaches in Edmonds, Meadowdale and Mukilteo to perform a

In my room Millennials, the 18- to 34-year-old generation, are increasingly living in their parents’ homes, according to a new survey (Page A7). Since 2010, the percentage of millennials moving back in with their folks has increased from 24 percent to 26 percent — with a Dear Abby. . . .D5 Horoscope . . . B4

for duty” after his annual physical (Today in History, Page D4.) It is simply not true that the words “fit for duty” were followed by “if by ‘duty’ you mean riding a mountain bike, clearing brush at your vacation home and bestowing nicknames on fellow world leaders.”

From a kayak, Marine Resources Committee member Lincoln Loehr, of Mukilteo, prepares to take measurements, part of mapping and monitoring kelp beds in the sound. Like forests above ground, the large forests of kelp provide important survival habitat to a huge array of sea life. 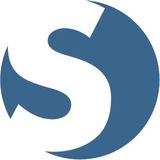