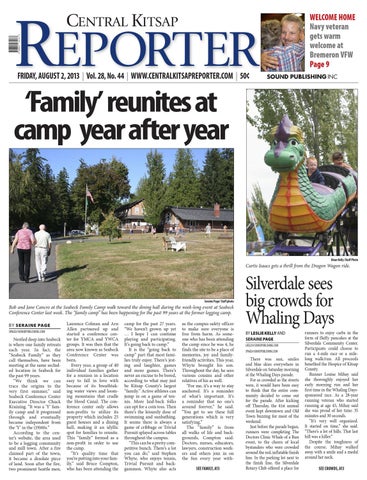 Curtis Isaacs gets a thrill from the Dragon Wagon ride.

Bob and Jane Cancro at the Seabeck Family Camp walk toward the dining hall during the week-long event at Seabeck Conference Center last week. The “family camp” has been happening for the past 99 years at the former logging camp. By Seraine Page spage@soundpublishing.com

Nestled deep into Seabeck is where one family retreats each year. In fact, the “Seabeck Family” as they call themselves, have been meeting at the same secluded location in Seabeck for the past 99 years. “We think we can trace the origins to the very first summer,” said Seabeck Conference Center Executive Director Chuck Kraining. “It was a ‘Y’ family camp and it progressed through and eventually became independent from the ‘Y’ in the (19)60s.” According to the center’s website, the area used to be a logging community and mill town. After a fire claimed part of the town, it became a desolate piece of land. Soon after the fire, two prominent Seattle men,

Laurence Colman and Arn Allen partnered up and started a conference center for YMCA and YWCA groups. It was then that the area now known as Seabeck Conference Center was born. Every year, a group of 40 individual families gather for a reunion in a location easy to fall in love with because of its breathtaking water views and looming mountains that cradle the Hood Canal. The conference center only allows non-profits to utilize its property which includes 25 guest houses and a dining hall, making it an idyllic spot for families to reunite. This “family” formed as a non-profit in order to use the camp. “It’s quality time that you’re putting into your family,” said Bruce Compton, who has been attending the

camp for the past 27 years. “We haven’t grown up yet … I hope I can continue playing and participating. It’s going back to camp.” It is the “going back to camp” part that most families truly enjoy. There’s jesting and laughter, games and more games. There’s never an excuse to be bored, according to what may just be Kitsap County’s largest “family.” Active athletes can jump in on a game of tennis. More laid-back folks can opt for a coin toss. Then there’s the leisurely dose of swimming and sunbathing. It seems there is always a game of cribbage or Trivial Pursuit splayed across tables throughout the campus. “This can be a pretty competitive bunch. There’s a lot you can do,” said Stephen Whyte, who enjoys tennis, Trivial Pursuit and backgammon. Whyte also acts

as the campus safety officer to make sure everyone is free from harm. As someone who has been attending the camp since he was 4, he finds the site to be a place of memories, joy and familyfriendly activities. This year, Whyte brought his son. Throughout the day, he sees various cousins and other relatives of his as well. “For me, it’s a way to stay anchored. It’s a reminder of what’s important. It’s a reminder that no one’s around forever,” he said. “You get to see these full generations which is very satisfying.” The “family” is from all walks of life and backgrounds, Compton said. Doctors, nurses, educators, lawyers, construction workers and others join in on the fun every year withSee family, A13

There was sun, smiles and blue skies everywhere in Silverdale on Saturday morning at the Whaling Days parade. For as crowded as the streets were, it would have been easy to think that the entire community decided to come out for the parade. After kicking off Thursday, the 41st annual event kept downtown and Old Town buzzing for most of the weekend. Just before the parade began, runners were completing The Doctors Clinic Whale of a Run event, to the cheers of local bystanders who were crowded around the red, inflatable finish line. In the parking lot next to the finish line, the Silverdale Rotary Club offered a place for

runners to enjoy carbs in the form of fluffy pancakes at the Silverdale Community Center. Participants could choose to run a 4-mile race or a milelong walk/run. All proceeds benefited the Hospice of Kitsap County. Runner Louise Mihay said she thoroughly enjoyed her early morning run and her first time in the Whaling Dayssponsored race. As a 28-year running veteran who started running at age 45, Mihay said she was proud of her time: 35 minutes and 30 seconds. “It’s very well organized. It started on time,” she said. “There’s a lot of hills. That last hill was a killer.” Despite the toughness of the course, Mihay walked away with a smile and a medal around her neck. See crowds, A13