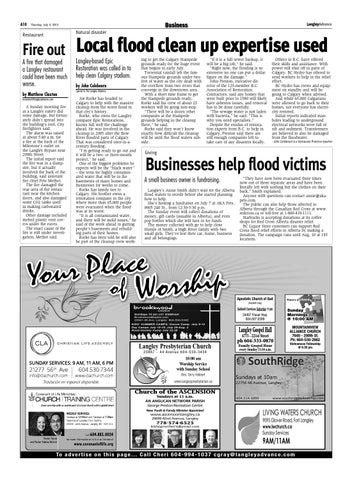 A fire that damaged a Langley restaurant could have been much worse. by Matthew Claxton

A Sunday morning fire at a Langley eatery did some damage, but fortunately didn’t spread into the building’s roof, City firefighters said. The alarm was raised at about 5:40 a.m. for a fire at the back of the Milestone’s outlet on the Langley Bypass near 200th Street. The initial report said the fire was in a dumpster, but it actually involved the back of the building, said assistant fire chief Pete Methot. The fire damaged the rear area of the restaurant near the kitchen doors, and also damaged some CO2 tanks used in making carbonated drinks. Other damage included melted plastic vent covers under the eaves. The exact cause of the fire is still under investigation, Methot said.

Joe Rorke has headed to Calgary to help with the massive cleanup from the worst flood in that city’s history. Rorke, who owns the Langley company Epic Restorations, knows full well the challenge ahead. He was involved in the cleanup in 2005 after the Bow River flooded parts of Calgary. That was considered once-in-acentury flooding. “I’m getting ready to go out and it will be a two- or three-month project,” he said. One of the biggest problems he expects will be the “black water” – the term for highly contaminated water that will be in the basements of many homes and businesses for weeks to come. Rorke has family ties to Calgary. His brother owns a restoration company in the city where more than 65,000 people were evacuated when the flood was at its worst. “It is all contaminated water, and there will be mold issues,” he said of the work ahead in gutting people’s basements and rebuilding parts of their homes. Rorke has been told he will also be part of the cleanup crew work-

“If it is a full sewer backup, it will be a big job,” he said. “Right now, the flooding is so extensive no one can put a dollar figure on the damage.” John Preston, executive director of the 125-member B.C. Association of Restoration Contractors, said any homes that were built prior to 1980 will likely have asbestos issues, and removal has to be done carefully. “The sewage water is just laden with bacteria,” he said. “This is why you need specialists.” Despite the exodus of restoration experts from B.C. to help in Calgary, Preston said there are still enough companies left to take care of any disasters locally.

Others in B.C. have offered their skills and assistance. With power still shut off in parts of Calgary, BC Hydro has offered to send workers to help in the relief effort. BC Hydro has crews and equipment on standby and will be going to Calgary when advised. And while 65,000 Calgarians were allowed to go back to their homes, not everyone has electricity restored. Initial reports indicated manholes leading to underground electrical networks were full of silt and sediment. Transformers are believed to also be damaged from the floodwater.

A small business owner is fundraising.

Langley’s Annie Smith didn’t wait for the Alberta flood waters to recede before she started planning how to help. She’s hosting a fundraiser on July 7 at AKA Pets, 8905 240 St., from 12:30-3:30 p.m. The Sunday event will collect donations of money, gift cards (usuable in Alberta), and even pop bottles which she will turn in for funds. The money collected with go to help close friends of Smith, a High River family with two small girls. They’ve lost their car, home, business and all belongings.

“They have now been evacuated three times now out of three separate areas and have been literally left with nothing but the clothes on their back,” Smith explained. Anyone with questions can contact annie@akapets.com. The public can also help those affected in Alberta through the Canadian Red Cross at www. redcross.ca or toll-free at 1-800-418-1111. Starbucks is accepting donations at its coffee shops for Red Cross Alberta disaster relief. BC Liquor Store customers can support Red Cross flood relief efforts in Alberta by making a donation. The campaign runs until Aug. 10 at 195 locations.

10:00 am Worship Service with Sunday School