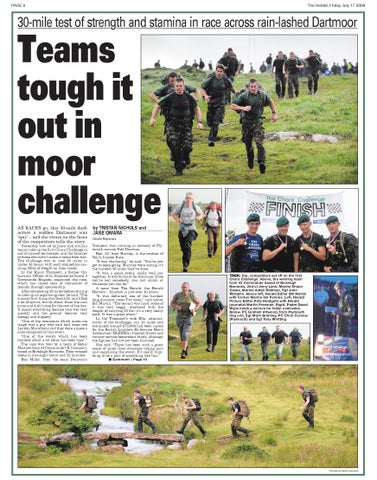 Teams tough it out in moor challenge

AS RACES go, this 30-mile dash across a sodden Dartmoor was ‘epic’ – and the strain on the faces of the competitors tells the story.

Yesterday saw 46 military and civilian teams take up the first Chara Challenge in aid of injured servicemen and the families of those who didn’t make it home from war. The challenge was to race 30 miles in under 10 hours, with each competitor carrying 32lbs of weight on their backs. Lt Col Harry Thomsett, a former Operations Officer with Stonehouse-based 3 Commando Brigade, organised the race, which has raised tens of thousands of pounds through sponsorship. After completing 18 miles before retiring to take up an organising role, he said: “The sunrise first thing was beautiful and lifted a lot of spirits, but by about 10am the rain came and didn’t stop for the rest of the day. It meant everything became very wet very quickly and the ground became very spongy and slippery. “One of the comments which made me laugh was a guy who said he’d done two London Marathons and they were a piece a cake compared to this event. “One of the words which has been bandied about a lot today has been ‘epic’.” The race was won by a team of Royal Marines from 42 Commando’s K Company, bnsed at Bickleigh Barracks. They romped home in just eight hours and 22 minutes. Ben Miller, from the team Dunstan’s

Yompers, was running in memory of Plymouth marine Neil Dunstan. Ben, 32, from Hartley, is the brother of Neil’s fiancée Kate. “It was shattering,” he said. “You’ve just got to keep going. Marines were saying it’s the hardest 30 miles they’ve done. “It was a great event, really well put together. It was brilliant for the cause. Once you’ve lost somebody, you just clutch at whatever you can do.” A team from The Herald, the Herald Horrors – finished in just over 10 hours. “It was definitely one of the hardest long-distance races I’ve done,” said editor Bill Martin. “The terrain was hard, some of it was very boggy, combined with the weight of carrying 32 lbs; it’s a very heavy pack. It was a great event.” Lt Col Thomsett’s wife Ella, administrator of the challenge, ran 18 miles and estimated around £70,000 had been raised for the British Limbless Ex-Service Men’s Association (BLESMA), Combat Stress and various service benevolent funds, although the figures had not yet been finalised. She said: “There has been such a great sense of pride from everyone taking part and organising the event. It’s really humbling to be a part of something like this.” ■ Comment – Page 10 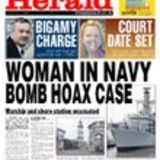