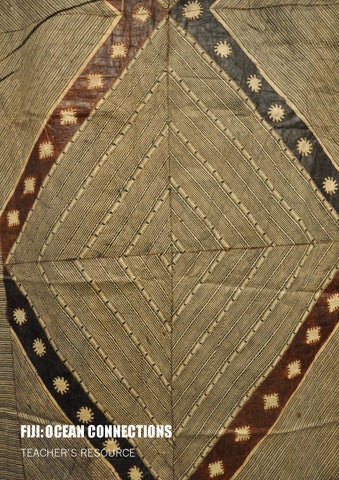 ABOUT THIS RESOURCE The aim of this resource is to aid teachers and educators using the Fiji: Ocean Connections exhibition at Plymouth City Museum and Art Gallery, and to provide a way to look at, learn from, and engage with some of the themes and objects included in the exhibition. Elements of this pack can support your visit to the exhibition, and can also be adapted for use in the classroom before or after your visit. Please refer to page 16 for guidance on how to book a visit.

OBJECTS IN THE EXHIBITION

WHAT CAN WE DO FOR YOU?

HOW TO BOOK A VISIT

OCEAN CONNECTIONS As Britain’s Ocean City, Plymouth was founded and thrives on its connections with the world’s oceans. The port of Plymouth is the city’s core, connecting land and sea since prehistoric times. Ships have set sail from and returned to Plymouth for hundreds of years, transporting people, goods and ideas around the globe. The ocean is fundamental to Fijian life, too. Fiji is an independent country consisting of more than 330 islands, situated in the South Pacific Ocean about 12,000 miles from Plymouth. After a long and complex history it was ceded to Britain on 10 October 1874. Fiji remained a British colony until 10 October 1970. Today, there are roughly 1500 Fijians enlisted in the British Armed Forces and more than 300 Fijians live in Plymouth and Torpoint. Over the centuries, people have embarked from Plymouth to explore, trade, fight and spread Christianity. During their travels, they gathered objects to bring home. On their return, they sometimes sold or gave these to the Museum, forming our World Cultures collections. The Museum houses over a hundred artefacts from Fiji, most of which were collected in the late 1800s and early 1900s, and many of which are displayed here for the first time.

SEA, LAND AND THE WESTERN POLYNESIAN TRIANGLE The sea played a fundamental role in the lives of many Fijians in the 18th and 19th centuries. It functioned as a road for travel both within the archipelago and across the Pacific Ocean. Divine chiefs were considered to have originated from overseas and their powers were often symbolised by ‘sea’ materials and beings.

Like the sea, the land was an important resource for food and materials and was also attributed with divine associations. Degei, a pre-Christian serpent god believed to be the creator of the Fijian world, lived in a cave at the summit of the northernmost peak of the Kauvadra Range in northeastern Viti Levu and controlled crop yields, seasons Three Western Polynesian nations and earthquakes. Fiji is now a – Fiji, Tonga and Samoa – were predominantly Christian country, especially connected to one another with most Fijians converting after the via complex exchange networks, powerful chief Ratu Seru Cakobau did strategic political and chiefly alliances so in 1854. and specialised skills. Samoan and Tongan canoe builders and carpenters settled in Eastern Fiji where they worked for local chiefs, introducing distinctive materials, skills and practices to Fijian life.

WEAPONS, CHIEFS AND MEN Weapons in Western Polynesia were made and used by men. They were both functional and ceremonial. In Fiji, a wide range of both Fijian and Tongan weapons was used long clubs, short throwing clubs, spears, bows, arrows and, from the mid-1800s, firearms acquired from European settlers. Weapons were necessary as many parts of Fiji were in a persistent state of tension. Effective in close combat, clubs could cause irreversible damage to the head - the most sacred part of the Fijian body. Weapon use extended beyond warfare into the realms of adornment, ritual and dance. Sometimes specific weapons were also considered to be manifestations of divine power. Their decoration and diversity reflected the investment in artistic creativity and labour appropriate to their cultural significance. Today, weapons are not functional objects. Instead, they are used ceremonially and as remembrances of ancestors passed. Their role has become akin to objects of display and prestige and, with the popularisation of Fiji as a tourist destination in the last half century, they have often been reproduced for mass consumption.

A studio portrait of a young Fijian man. He is dressed for dance or festivity and bears a kiakavo club. The portrait was taken by J.W. Waters, a prominent photographer in Suva, 1880s (P.4076.ACH1,MAA)

OBJECTS IN THE EXHIBITION

When Christian missionaries arrived in Fiji, they used Fijian objects and practices to connect with the people they wanted to convert. Often, they would use tabua to gain access to villages in the country’s interior. Here, they would receive and present tabua to allow them to pass through unharmed. The newspaper clipping stuck to this example reads: “Through storm and mud we had pressed our way into a district of Fiji,” writes Missionary Parker. “At one town all of the people but three took their stand with us. A number of towns united in a big meeting and presented a formal address in writing, pleading that we send them a European missionary. They presented their sacred Tabua (whale’s tooth). In olden times, this Tabua would take life, or preserve life; provoke war or stop war”.

Arguably the most intricately and finely stencilled type of barkcloth made in Fiji, cloth such as this is only made in eastern Fiji. Probably from the Yasayasamoala group of islands, this cloth is similar to many found in museum collections around the world. The white designs found in the red (brown) bands scattered across the cloth, however, are interesting as they are not often seen on barkcloth.

Necklaces like these are found all over the Pacific. They are made from shells and seeds on cotton thread. Today, they are often associated with the tourist trade. This was in its very early stages in Fiji when Gertrude Benham collected these necklaces. When the British Empire was at its height, many collectors bought objects from Fiji to the Museum. They included travellers, colonial administrators, military personnel, soldiers, traders and missionaries. Gertrude Emily Benham (1867â&#x20AC;&#x201C;1938) was one of our most significant collectors. An independent traveller and mountaineer, she circumnavigated the globe eight times. She aimed to visit every country in the British Empire. In 1934, she gave the Museum over eight hundred objects from her travels around the world. Benham visited Fiji in 1904 and perhaps again in 1923. There, she made a small collection of objects significant to Fijian social and cultural life. Many of the things she collected were widely available for sale. Trade with visitors was already flourishing in Fiji by the time of her first visit. You can find out more about Benham and see her worldwide collections in the Bringing the World to Plymouth gallery, downstairs.

WHAT CAN WE DO YOU FOR YOU? We are able to offer schools various options when visiting the exhibition. Visits can be arranged for anywhere between one class to an entire school. In many cases, a member of staff can be present to facilitate your visit. We are also very happy for you to visit as a self-directed group.

HOW TO BOOK A VISIT Booking in advance is essential for visits We want to ensure your group has the best experience possible when visiting, so please remember to contact us first before organising your trip. We are very popular with schools, colleges and other user groups, so our galleries can get very busy from time to time. For enquiries for school visits, contact: museumvisits@plymouth.gov.uk Please have a range of possible dates available before contacting us, as it may not always be possible to offer you your first choice date. We can book facilitated visits on Tuesdays and Thursdays, and self-directed visits on Wednesdays and Fridays (subject to availability). Please remember to bring along sketchbooks and pencils for your visit, as wet materials, and also dusty materials will not be permitted in the exhibition galleries. If you have any questions regarding materials, please contact us using the email above.

FURTHER RESOURCES Many of our previous Teacherâ&#x20AC;&#x2122;s Packs are available as PDF downloads from our website: ISSUU 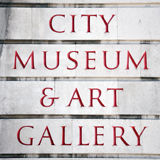 10 October 2015 to 16 January 2016 This newly-developed world cultures exhibition will explore the surprising connections between Plymouth...

10 October 2015 to 16 January 2016 This newly-developed world cultures exhibition will explore the surprising connections between Plymouth...