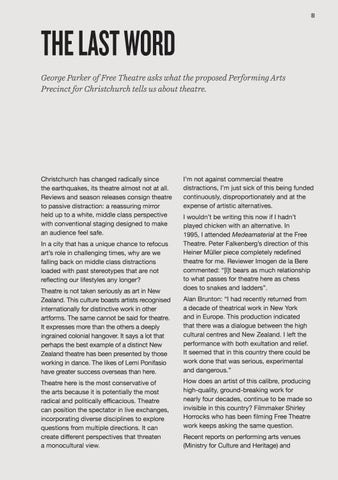 THE LAST WORD George Parker of Free Theatre asks what the proposed Performing Arts Precinct for Christchurch tells us about theatre.

Christchurch has changed radically since the earthquakes, its theatre almost not at all. Reviews and season releases consign theatre to passive distraction: a reassuring mirror held up to a white, middle class perspective with conventional staging designed to make an audience feel safe. In a city that has a unique chance to refocus art’s role in challenging times, why are we falling back on middle class distractions loaded with past stereotypes that are not reflecting our lifestyles any longer? Theatre is not taken seriously as art in New Zealand. This culture boasts artists recognised internationally for distinctive work in other artforms. The same cannot be said for theatre. It expresses more than the others a deeply ingrained colonial hangover. It says a lot that perhaps the best example of a distinct New Zealand theatre has been presented by those working in dance. The likes of Lemi Ponifasio have greater success overseas than here. Theatre here is the most conservative of the arts because it is potentially the most radical and politically efficacious. Theatre can position the spectator in live exchanges, incorporating diverse disciplines to explore questions from multiple directions. It can create different perspectives that threaten a monocultural view.

I’m not against commercial theatre distractions, I’m just sick of this being funded continuously, disproportionately and at the expense of artistic alternatives. I wouldn’t be writing this now if I hadn’t played chicken with an alternative. In 1995, I attended Medeamaterial at the Free Theatre. Peter Falkenberg’s direction of this Heiner Müller piece completely redefined theatre for me. Reviewer Imogen de la Bere commented: “[I]t bears as much relationship to what passes for theatre here as chess does to snakes and ladders”. Alan Brunton: “I had recently returned from a decade of theatrical work in New York and in Europe. This production indicated that there was a dialogue between the high cultural centres and New Zealand. I left the performance with both exultation and relief. It seemed that in this country there could be work done that was serious, experimental and dangerous.” How does an artist of this calibre, producing high-quality, ground-breaking work for nearly four decades, continue to be made so invisible in this country? Filmmaker Shirley Horrocks who has been filming Free Theatre work keeps asking the same question. Recent reports on performing arts venues (Ministry for Culture and Heritage) and 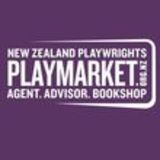