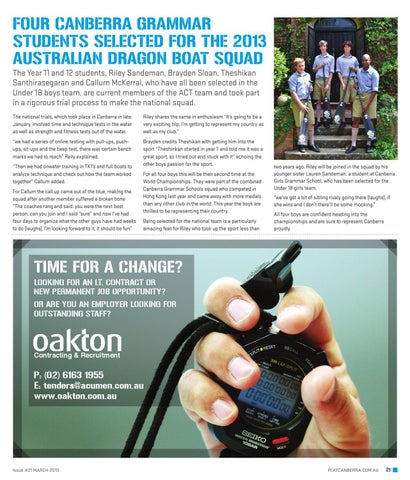 Four Canberra Grammar students selected for the 2013 Australian Dragon Boat squad The Year 11 and 12 students, Riley Sandeman, Brayden Sloan, Theshikan Santhirasegaran and Callum McKerral, who have all been selected in the Under 18 boys team, are current members of the ACT team and took part in a rigorous trial process to make the national squad. The national trials, which took place in Canberra in late January, involved time and technique tests in the water as well as strength and fitness tests out of the water.

Riley shares the same in enthusiasm “It’s going to be a very exciting trip, I’m getting to represent my country as well as my club.”

“we had a series of online testing with pull-ups, pushups, sit-ups and the beep test, there was certain bench marks we had to reach” Reily explained.

Brayden credits Theshikan with getting him into the sport “Theshinkan started in year 7 and told me it was a great sport, so I tried out and stuck with it” echoing the other boys passion for the sport.

“Then we had onwater training in TK1’s and full boats to analyze technique and check out how the team worked together” Callum added. For Callum the call up came out of the blue, making the squad after another member suffered a broken bone ”The coaches rang and said: you were the next best person, can you join and I said “sure” and now I’ve had four days to organize what the other guys have had weeks to do (laughs), I’m looking forward to it, it should be fun”

For all four boys this will be their second time at the World Championships. They were part of the combined Canberra Grammar Schools squad who competed in Hong Kong last year and came away with more medals than any other club in the world. This year the boys are thrilled to be representing their country. Being selected for the national team is a particularly amazing feat for Riley who took up the sport less than

two years ago. Riley will be joined in the squad by his younger sister Lauren Sandeman, a student at Canberra Girls Grammar School, who has been selected for the Under 18 girls team. “we’ve got a bit of sibling rivaly going there (laughs), if she wins and I don’t there’ll be some mocking.” All four boys are confident heading into the championships and are sure to represent Canberra proudly.

TIME FOR A CHANGE? LOOKING FOR AN I.T. CONTRACT OR NEW PERMANENT JOB OPPORTUNITY? OR ARE YOU AN EMPLOYER LOOKING FOR OUTSTANDING STAFF? 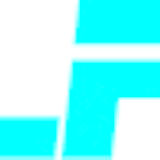 The Brumbies aiming for success in the Centenary year

The Brumbies aiming for success in the Centenary year