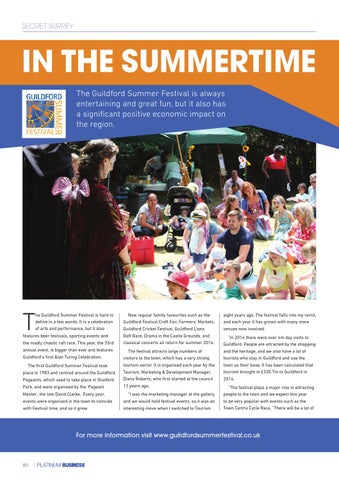 IN THE SUMMERTIME The Guildford Summer Festival is always entertaining and great fun, but it also has a significant positive economic impact on the region.

and each year it has grown with many more

Raft Race, Drama in the Castle Grounds, and

the madly chaotic raft race. This year, the 33rd

classical concerts all return for summer 2016.

he Guildford Summer Festival is hard to define in a few words. It is a celebration of arts and performance, but it also

annual event, is bigger than ever and features

Now regular family favourites such as the

eight years ago. The festival falls into my remit,

“In 2014 there were over 4m day visits to Guildford. People are attracted by the shopping

The festival attracts large numbers of

and the heritage, and we also have a lot of

visitors to the town, which has a very strong

tourists who stay in Guildford and use the

tourism sector. It is organised each year by the

town as their base. It has been calculated that

place in 1983 and centred around the Guildford

tourism brought in £330.7m to Guildford in

Pageants, which used to take place in Shalford

Diana Roberts, who first started at the council

Park, and were organised by the ‘Pageant

“The festival plays a major role in attracting

“I was the marketing manager at the gallery,

people to the town and we expect this year

events were organised in the town to coincide

and we would hold festival events, so it was an

to be very popular with events such as the

with Festival time, and so it grew.

interesting move when I switched to Tourism

Town Centre Cycle Race. “There will be a lot of 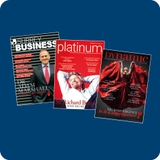