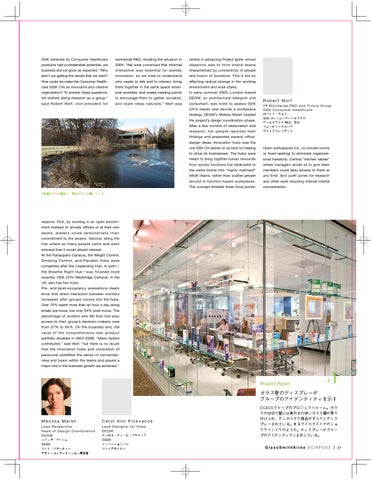 GSK believed its Consumer Healthcare products had considerable potential, yet business did not grow as expected. “Why aren’t we getting the results that we want? How could we make the Consumer Healthcare (GSK CH) an innovative and creative organization? To answer these questions, we started doing research as a group,” said Robert Wolf, vice president for

worldwide R&amp;D, recalling the situation in 2004. “We were convinced that informal interaction was essential for speedy innovation, so we tried to understand who needs to talk and to interact, bring

central in advancing Project Ignite, whose objective was to form brand teams characterized by connectivity of people and fusion of functions. This it did by effecting radical change in the working

them together in the same space whenever possible, and create meeting points

to encourage them to gather, socialize,

DEGW, an architectural designer and consultant, was hired to assess GSK

CH’s needs and devise a workplace strategy. DEGW’s Melissa Marsh headed the project’s design coordination phase. After a few months of observation and research, her people reported their

findings and presented several officedesign ideas. Innovation hubs was the one GSK CH seized on as best for helping to drive its businesses. The hubs were meant to bring together human resources from across functions but dedicated to the same brand into “highly matrixed” (Wolf) teams, rather than scatter people around in function-based workplaces. The concept entailed three focal points:

Open workspaces (i.e., no private rooms or ﬁxed seating) to eliminate organizational hierarchy. Central “kitchen tables” where managers would sit to give team members could easy access to them at any time. And quiet zones for research and other work requiring intense mental concentration.

reasons: First, by working in an open environment instead of private offices or at their own desks, leaders could demon s t r a t e t h e i r commitment to the project. Second, siting the hub where so many people came and went ensured that it would attract interest. At the Parsippany Campus, the Weight Control, Smoking Control, and Panadol Hubs were completed after the Leadership Hub. A sixth— the Breathe Right Hub—was finished more recently. GSK CH’s Weybridge Campus, in the UK, also has two hubs. Pre- and post-occupancy evaluations clearly show that direct interaction between workers increased after groups moved into the hubs. Over 70% spent more than an hour a day doing emails pre-move, but only 54% post-move. The percentage of workers who felt they had easy access to their group’s decision-makers rose from 37% to 84%. On the business end, the value of the comprehensive new product portfolio doubled in 2007–2008. “Many factors contributed,” said Wolf, “but there is no doubt that the innovation hubs and colocation of personnel solidified the sense of connectedness and fusion within the teams and played a major role in the business growth we achieved.”