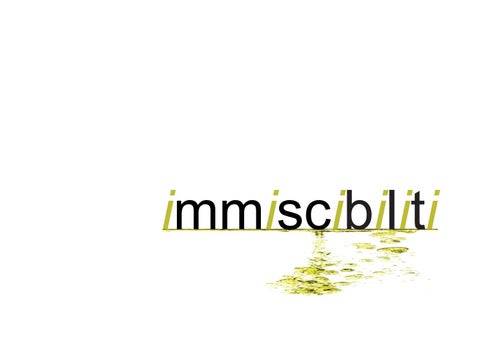 Immiscibiliti is an exhibition by contemporary artists and structural film makers relating to the theme of reactivity and resistance in the process of creativity. As suggested by the title this can often operate along the boundaries of the miscible and the immiscible; the blending of influences or resistance to those proximities. In effect this exhibition is designed to operate as an intriguing chemical experiment, including artists that on one level share the same influences yet on another inhabit diverse evolutionary paths.

a chemical experiment in reactivity

UNESCO Year of the Periodic Table

UNESCO Year of the Periodic Table

a chemical experiment in reactivity

My practice encompasses video and live performance, I have been making videos with mobile phone cameras for the last 7 years. As an accessible entry to video it has become a way of working and thinking with video, and interacting with my visual surroundings. Light, time and place are themes that run throughout my creative activities, alongside ideas of flow and improvisational structures. Sound and its relationship to the image have become increasingly significant. I also have background in textiles and use thermochromic hand screen-printed fabric and light to produce para-cinematic performances.

Clapping. SD Video, 1', sound, 2006. I filmed myself clapping, then removed all the frames except for the ones where the hands meet and the clap sounds. 1500 frames. ZĂśetrope. SD Video, 3', silent, 2008. The first in a series of works exploring spontaneously occurring MoirĂŠ patterns. The occurances are filmed in a single unedited shot. This was one found in a garden in northwest Umbria. Ernest Atkinson Park (Long version), HD video, 40', silent, 2012. From original footage shot in a children's playground in Windsor, Ontario, I took three consecutive frames and looped them for one minute. Each shot advances by one frame of the original material, following the same pattern: frames 1,2,3 then 2,3,4, then 3,4,5 etc. By fixating on parts of the screen the viewer may experience abundant motion effects.

Amyâ&#x20AC;&#x2122;s Window 1 & 2 are improvised single-take smartphone videos looking at a window that has been a great source of inspiration for Amy Dickson.

In â&#x20AC;&#x2DC;Solar Wind Orreryâ&#x20AC;&#x2122; a model railway orbits in the sky like a 21st century interpretation of historic orreries. Behind a golden engine, representative of the Sun, are wagons containing symbolic imagery of the particles that constitute the Solar Wind - i.e. electrons and protons. Although a model of this phenomenon, it is in fact an accurate representation in that both of these kind of particle are present escaping from the Sun. Although consistent with the theory of the Sun being an electric anode in a galactic circuit, this anomaly points to the Solar Wind being more in line with Charge Field (Emission) theory. Here the photonic field acts as a kind of ether underpinning all electro-magnetic phenomena. In the centre of the train is a wagon where all these particles are represented in the form of a disassociated plasma, frozen in the act of recombining back into its neutral state. This type of installation explores my interest in concepts of celestial physics and the role that model-making plays in their interpretation.

The sounds within Meteor Radio Echoes: Southern Taurids, 2019 are terrestrial VHF signals deflecting off the ionisation trails of meteors burning in the upper atmosphere. They have been visualised through a sound emission analyser and projected onto a 20â&#x20AC;? glass Fresnel lens from a Mole Richardson searchlight. The radio echoes are from the annual Southern Taurids meteor shower associated with the periodic comet Encke and were recorded through livemeteors.com. The meteors were detected in Washington with a Yagi antenna pointing at a TV Tower in Canada. The intention was for the meteor echoes to be broadcast live but technical difficulties led to the decision to recreate this work live outside at night at a later date.

Fields of Presentation Receding Four framed prints of the index pages of a book that addresses theories of representation, perception and relativity. Each page has been typeset so as to replicate the layout of the original, and printed at a scale that equates to that of the book if viewed from a distance at which the text is on the cusp of legibility for a reader with 20:20 vision in even daylight. The book itself remains anonymous.

Two films shot in Iceland during a one month residency at The Hafnaborg Museum. 'GODDUR’. The celebrated Icelandic graphic designer and broadcaster Guðmundur Oddur Magnússon speaks (off-camera) about the shamanic wisdom behind the whole practice of image making and the fact that the human spirit changes every 5000 years. ‘GOLDIE’ or ‘Snap to Grid’. The film’s sounds and images evoke the interplay between ‘nature’ and what Kant called ‘second nature’ including the spiritual. ‘Goldie’ is a series of impressions of the powerful Icelandic landscape and water, using the playful juxtaposition of images. It charts some of the events surrounding the gilding of several rocks with 18-karat gold leaf and their placement at particular sites in the Icelandic landscape. The films both use a music score especially composed by the well-known Icelandic composer, Styrmir Sigurdsson.

Jamie Jenkinson is a video maker working predominantly on user-friendly video devices. He is based between Morecambe and London, and is currently completing his doctoral thesis on materialist approaches to popular/personal video technology. Jenkinson has exhibited internationally, and teaches in London.

biographies Nicola Raeâ&#x20AC;&#x2122;s art practice engages with sound visualisation in response to scientific data as well as live co-produced sound using both digital and analogue equipment. Since 2008 these visualisations have responded interactively to a variety of acoustic sources, as well as archive recordings of electro-acoustic phenomena and astrophysical research data. Her art practice is based at APT Studios, SE London and she frequently exhibits work internationally.

steven scott I work with moving image, projection, light, photography, text and print and utilise processes of mirroring, repetition, phasing and extended duration so that the perception of movement and stasis may become indistinguishable and the image and its subject begin to separate.

Nicky Hamlyn is Professor of Experimental Film at University for the Creative Arts, Canterbury.

Since 1974 he has completed over 70 single screen 16 mm films, videos, installations and multi-projector performances. His book Film Art Phenomena (2003) is published by the BFI. Recent publications include Experimental and Expanded Animation, co-edited with Vicky Smith (Palgrave Macmillan, 2018) .

paul malone Paul Malone studied BA Fine Art at Reading University and MFA at the Royal College of Art. His art practice researches lost and forgotten theories of science and natural philosophy. These are woven into installations, sculptures and movies as dynamic narratives and generated mythologies. In this series of work a model railway acts as a metaphor for contemporary scientific modelmaking.

Studied Fine Art at The Munich Academy (MA). Her practise includes, artistâ&#x20AC;&#x2122; collective foreign investment and multimedia room installations focusing on opposites with irony and wit, often she unites the mundane with the decorative (beauty) questioning known value systems in art as well as in our society. Lives and works in London. 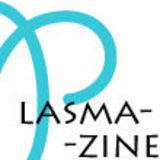 Immiscibiliti is an exhibition by contemporary artists and structural film makers relating to the theme of reactivity and resistance in the...

Immiscibiliti is an exhibition by contemporary artists and structural film makers relating to the theme of reactivity and resistance in the...