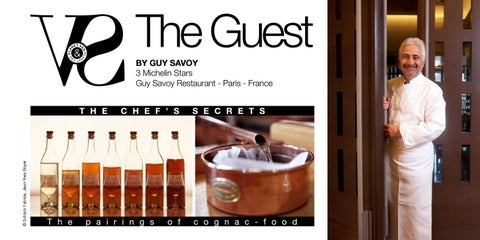 GUY SAVOY In a few dates...

• 1953 : Guy Savoy was born. • 1980 : He opened his first restaurant in Paris. Recognition from the culinary world arrived thick and fast. • 1997 : Guy Savoy entered the Larousse dictionary. • 2002 : The red Michelin guide awarded him his third star. Guy Savoy is elected chef of the year by his peers. • 2003 : Guy Savoy began opening his other Houses. • 2006 : A Guy Savoy restaurant opened in Caesar’s Palace, Las Vegas, in partnership with his son, Franck. • 2015 : The Guy Savoy restaurant moved to the Monnaie de Paris. • 2016 : He was elected the World’s Best Chef by La Liste, which summarizes the world’s culinary rankings. Find out more at www.guysavoy.com

interview COGNAC When a starred chef talks about it.... Cognac can be the ideal companion to a top-scale dinner. In fact, many dishes match perfectly with this delicate spirit. Guy Savoy, the three-starred French chef, sponsored Cognac in the last auctions, ‘La Part des Anges’. A cognac lover, he gives us a few thoughts on it... By Ange DAJE

ou have just sponsored the tenth edition of ‘La Part des Anges’? I feel very honored to have done so. It was an auction of exceptional cognacs which raised just over 255,000 dollars for charity. A record was beaten, so we could say that it was an ‘XO’ version....

What is your first memory of Cognac? The first time that I came to Cognac, I heard about ‘La Part des Anges’*. I discovered all of these darkened rooftops....I did not imagine that the angels were there for something [smiling], but everything was explained to me and my presentiment was confirmed: In Cognac, we do not hesitate to call upon overqualified collaborators to reach perfection [smiling]. The angels are therefore in action twenty-four seven to manage the evaporation of what represents around twenty million bottles per year, I was told, and to thus guarantee in the barrels - with which I fell in love at first sight [smiling] - the nectar that is cognac. * La Part des Anges [the angels’ share] is the part of the volume of alcohol which evaporates during the barrel ageing of the cognac.

What image do you have of cognac? We no longer know if cognac is a proper noun or a common noun, that’s how hugely famous it has become. For me, it represents the ultimate end-of-meal flourish when you’re dining with friends or even alone, with a cigar on an autumn evening.... An open fire and the Cello Suites by Johann Sebastien Bach are optional extras! Can it be combined with a dinner? Of course, a cognac can naturally be enjoyed at the restaurant as well and, so that my guests have the opportunity to finish their meals on this note, and there’s no obligation in terms of quantity, I have always offered cognacs and eaux-de-vie starting from one centiliter [0.3 fl.oz]. In my Las Vegas restaurant, there is an entire room dedicated

interview to cognac: the ‘Cognac Lounge’, as described on the restaurant’s website by the Americans themselves: "So, cognac. The supreme digestive!"

milk: excellent! And let me also take the opportunity to tell you about the famous fine à l’eau of our grandparents, which was served as an aperitif and could advantageously replace the ‘whiskey ice cubes’.

Beauty will save the world» wrote Dostoïevski. So I put all my confidence in cognac, in those who create it... And also in those who taste it!

Do cognac and cuisine have anything in common? Like cuisine, cognac is to be looked at, breathed, tasted; Cognac allows you to share happy moments... 

How do you drink it? I prefer to drink neat cognac, but I’ve sometimes been pleasantly surprised by the blends that I had first deemed iconoclastic and which ended up being rather successful. I saw the English - of course, the English! - pouring a dose of cognac into a glass of

secrets COGNAC The main pairings Contrary to popular belief, cognac is not just taken as a digestive… At the table, it is happily blended with all dishes, from the starter to the dessert as part of a fine meal. Cognac enchants the palate, it sharpens, enhances, surprises and reveals as much as it caresses, coats and softens the flavors; a power that cognac owes to the wealth of its aromatic palate. Here are a few principles.

1 Cognac requires dishes with texture and character to blend with it. The affinity between the aromas thus allows the magic of the pairing to be born. 2 The degree of temperature plays an important role in the success of the pairings. The cold turns out to be an ally by making the cognac rounder. 1 to 2 centiliters [0.3 to 0.06 fl.oz] of cognac per dish is recommended, and no more...

3 Sugar blends naturally with cognac. In the mouth, it produces a pleasant effect as it alleviates the sensation of alcohol. 4 Bitterness is a partner of choice. Go for aged cognac because of its bitterness resulting from oak barrel aging. 5  Salt and cognac are old accomplices because both are flavor enhancers.

A moderate dose of fat is a nice combination with cognac.

7 Caviar, and more particularly, the ossetra, harmonizes perfectly with cognac. 8 Cognac with a starter needs to be light. So seafood is a good pairing option. 9 Cognac is at home amongst sweet delights. Chocolate brings out the amber, woody, caramel or vanilla notes. 10 With a main dish, cognac works with an array of dishes. Meat (lamb, duck, beef) of course, but also fish (salmon, saint-jacques).

Find out more at www.cognac.fr