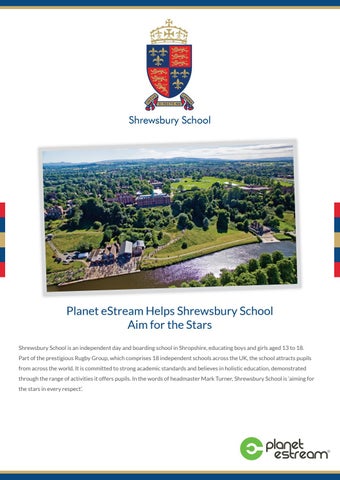 Planet eStream Helps Shrewsbury School Aim for the Stars Shrewsbury School is an independent day and boarding school in Shropshire, educating boys and girls aged 13 to 18. Part of the prestigious Rugby Group, which comprises 18 independent schools across the UK, the school attracts pupils from across the world. It is committed to strong academic standards and believes in holistic education, demonstrated through the range of activities it offers pupils. In the words of headmaster Mark Turner, Shrewsbury School is â&#x20AC;&#x2DC;aiming for the stars in every respectâ&#x20AC;&#x2122;.

An Impressive Solution Director of IT Neil Allen ﬁrst came across Planet eStream at BETT in 2015. At the time, the school was using ClickView, but Neil had heard ‘chatter’ from other schools about Planet eStream and was interested to ﬁnd out for himself what the product could offer. It immediately impressed him and, following a further presentation at the school in the summer and conversations with the team, the decision was made to switch. Neil says it was the functionality Planet eStream offers and the fact that it is a web-based system which added to its appeal and galvanised their decision.

“Digital signage and the ability to record classroom lessons were two features that stood out to us,” he says. “And, because it’s a web-based solution, it provides so much ﬂexibility. It means Planet eStream can be used anywhere, on any device; there’s no need to install software on a lot of different devices and then have to keep on top of software updates. It just makes everything so much easier to manage and less time consuming.”

A Smooth Transition The school had a lot of content stored on ClickView, and the team was concerned about losing it in the transition to Planet eStream. They also had concerns about how long the switchover would take and how complicated it would be.

“In fact, we needn’t have worried at all,” Neil says. “The process was completed in a few days and was quite painless. The Planet eStream team was on hand throughout to make sure things went according to plan, and gave us a lot of support. We’ve always found them to be very helpful and knowledgeable; the technical support they offer really is very good.” “As well as direct support, their online support and training resources are very useful; I used them very recently when one of my team was on leave and quickly found exactly what I was looking for to help me do what I needed to do.”

A Widely Used Resource Neil says that Planet eStream was immediately adopted by staff and pupils throughout the school, and is now used by almost every faculty on a weekly, if not daily, basis for both classroom-based teaching and homework. He says Planet eStream very quickly became the ﬁrst port of call for storing and sharing video, and that it readily integrates with the school VLE via the Fireﬂy plugin. Staff have also been very quick to adopt new Planet eStream features as and when they are released to support their teaching and learning and improve outcomes.

“The English department has really embraced the quiz functionality, and the ability to add questions to videos is being widely used throughout the department to support interactive learning,” Neil says. “They’re also making the most of the access Planet eStream provides to the BBC Shakespeare Archive, which is a fantastic resource, and is being used extensively. The History department has also added lots of great content from the BBC Digital Archive to complement their learning resources.” Planet eStream introduced a satellite recording feature to support the teaching of Modern Foreign Languages. This provides a selection of channels covering content from France, Germany, Holland, Poland, Italy, Spain and Wales. Neil says that the MFL team at Shrewsbury were particularly happy with the introduction of this feature, which replaced their previous, very complex, in house system for handling satellite recording: “Now, it’s as straightforward to record a foreign TV programme as it is to record terrestrial UK channels, which has made their lives easier and saves them a signiﬁcant amount of time.”

Sport plays a signiﬁcant role in life at Shrewsbury School, something Planet eStream is also actively supporting... “We put on a lot of sporting events, and Planet eStream is used extensively to record matches,” says Neil. “The recordings are made available for pupils to watch, either as a spectator in their leisure time or for the teams involved to review and analyse matches. This tool is also widely used for performance assessment at GCSE and A-Level.”

Actively Supporting BYOD “Uploading content to Planet eStream couldn’t be simpler and faster,” Neil says. “Three clicks and it’s done. What’s more, it accepts whatever ﬁle you upload and converts it into the correct format for viewing on a range of devices. Not only does that make life easier for staff and pupils, it also plays a really important role in supporting our Bring Your Own Device policy.” At Shrewsbury School, pupils and staff are using a wide variety of technologies, and it’s important that content can be delivered in a way that can be accessed on any device. Neil believes that this is one of Planet eStream’s real strengths: “No matter what technology or device people are using, they can access the content they need. This is fantastic for us – and no doubt for many other schools, who are - or will soon be - introducing BYOD policies.”

Exceeding Expectations So has Planet eStream lived up to expectations at Shrewsbury School? For Neil, it’s a resounding ‘YES’. “Members of staff ﬁnd Planet eStream very easy to use and as a result, it is widely used across the school. The team at Planet eStream offers excellent support on the rare occasion that we need it and are continuously developing the platform and adding new functionality to support ongoing needs, which is great.” And, when it comes to value for money, it’s another big tick in the box from Neil: “I really don’t think Planet eStream is expensive,” he says. “When I look at the cost versus the value we get from it, and when I compare that to other resources and services we invest in, I think Planet eStream represents extremely good value for money.”

Shrewsbury School is an independent day and boarding school in Shropshire, educating boys and girls aged 13 to 18. Part of the prestigious R...

Shrewsbury School is an independent day and boarding school in Shropshire, educating boys and girls aged 13 to 18. Part of the prestigious R...