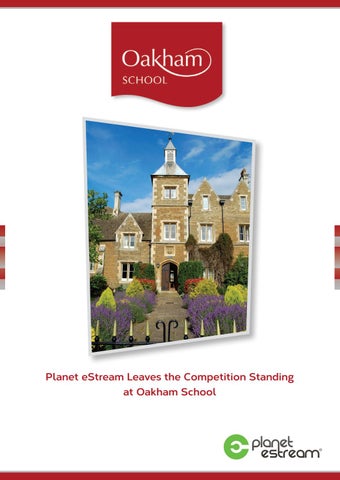 Planet eStream has impressed staff and students alike, enabling Bath College to implement online assessment; create, share and integrate video content into its VLE - and much more. City of Bath College initially commissioned Planet eStream in 2011 and has used it widely since then. It has now been rolled out across two campuses following its merger with Norton Radstock College in April 2015. The merged Bath College has over 3,000 full time students, more than 9,000 part-time students and approximately 750 academic and service staff.

Naomi Elliott, Head of Library and Learning Resources at the college, was instrumental in selecting the Planet eStream system in 2011. She says that at first it was used to support the management of the rapidly increasing use of film and TV programmes in class in a way that kept pace with changes in technology.

Planet eStream Leaves the Competition Standing at Oakham School Oakham School is an independent school based in Oakham, Rutland, offering boarding, flexi- boarding and day provision for boys and girls. The school has approximately 1,000 students aged between 10 and 18. In the sixth form, pupils can study either A- Levels or the International Baccalaureate Diploma (IBDP). Oakham is one of the countryâ&#x20AC;&#x2122;s top performing IB Diploma schools and also produces consistently high GCSE and A-Level results The school is dedicated to blending academic excellence with a richness of opportunity beyond the classroom to prepare girls and boys for the life challenges they will face. Oakham prides itself on combining high standards of teaching with opportunities for independent study to create intellectual curiosity among students and help them fulfil and exceed their academic and intellectual potential. Music and drama play strong parts in school life, as do Sport and Art and Design. (The school was awarded a Design Mark in recognition of excellence in the teaching of Design) The many educational trips, expeditions and tours, the Duke of Edinburgh programme, Combined Cadet Force and opportunities to volunteer in the community all contribute to Oakhamâ&#x20AC;&#x2122;s Total Curriculum offer. The school switched to Planet eStream in 2011, after outgrowing its existing ClickView system.

Supporting a Culture of Empowerment The culture of empowerment at Oakham School extends beyond pupils to encompass everyone in the school. This culture was in part responsible for the decision to replace the school’s outdated ClickView media storage and management platform with Planet eStream, as Assistant Network Manager Carl Wood explains: “Here at Oakham, staff are responsible for managing their own content and data. We were looking for a solution that teachers could use whenever they needed to, with minimal input from the technical team. The high quality video content and in-depth permission settings within Planet eStream were a huge draw for us, and made it very easy for us to implement the platform throughout the school.” “The fact that Planet eStream is very intuitive to use was a huge benefit, too. Staff simply don’t have time for complex and convoluted systems, and the level of technical enquiries we receive is minimal: a strong testament to its ease of use.”

A Future-proof Solution Oakham School had a huge VHS media archive, bringing with it many challenges: tape degradation, availability, loss – not to mention the fact that the playback equipment was becoming obsolete. The Information Systems department initially created its own solution in house, but knew this wasn’t a viable long-term option and began to look elsewhere for help. “In our original search for a product that could catalogue, store and stream media in a simple and manageable way, we initially chose ClickView,” Carl says. “After two years, we realised that the platform simply couldn’t offer the content management capabilities we were looking for. We wanted a solution that enabled staff and pupils to create and manage content as well as viewing it, and that’s when we discovered Planet eStream at BETT 2011. It ticked all of the boxes for us, and we haven’t looked back since.”

Five years on, Planet eStream plays a fundamental role in life at Oakham and is used across all subject areas in a range of different ways. “The video content that we have built up in our media archive is excellent, and we treat Planet eStream as our own internal YouTube,” says Carl. “We get very good viewing figures between 30 and 40 views a day, and thousands over the course of a year. In lessons, Planet eStream is the ‘go to’ for video. Everyone knows about it, and everyone uses it.”

Capturing Lessons and Events The live lesson capture functionality is frequently used, both internally and externally. Carl says that recording teaching sessions and other events has become common practice: “Just the other week we hosted a sporting conference at the school. All of the sessions and presentations were streamed live on the day and recorded to the archive, too, for sharing after the event. We also use live capture a lot for Inset days. Not all staff can get to all of the sessions, but they can all access them afterwards. These recordings are very useful as training tools after the event and as part of our induction process for new staff as they join.” The sports department records all matches – home and away – and gives parents password-protected access to recordings, so they can still watch matches even if they are unable to get to them in person. Pupils and coaches also use the footage for post-match reviews.

Supporting Video Assessment Where online assessment is used in the school, Planet eStream is the go to solution. At Oakham, the drama department makes most use of this functionality: “Every play and every rehearsal is also recorded and stored,” says Carl. “The permissions settings are very useful, too; there are certain sections that only the director of drama can access. We are required by the exam boards to keep footage for a certain length of time, and be able to retrieve it if required. Planet eStream makes this very easy to achieve.”

Helping with Lesson Preparation Oakham School use Planet eStream’s classroom capture functionality as part of the flipped classroom. Carl says that the English department in particular use it to go through passages of writing ahead of a lesson and raise points for analysis and discussion in class. Teachers in all departments record and use broadcast footage widely in the classroom, too, with Freeview and TV recording the most popular Planet eStream feature at Oakham. “We have 30 Freeview channels and store 36 days’ worth of footage,” Carl says. “Staff use it a lot for recording, and love it – largely because it’s so easy to use and they can very easily access exactly what they want.” “We use the Heritage Library System within the school and also have a Moodle VLE. The Planet eStream plugins work well, although we tend to find that whilst everyone in school links to Planet eStream in some shape or form, it’s often independent of the VLE.”

Providing Creative Digital Signage Applications There are currently 10 digital signage screens located across the school, which are used in a variety of different ways. They support the school’s ‘fluid’ classroom structure, in which nobody owns a classroom and screens are used for timetabling, with corridor displays informing pupils where lessons are taking place. They are also used in the dining hall to display the day’s menus for boarders and by catering staff, who link the system to Outlook to find out how many packed lunches are required on a given day. Sports teams also use the screens to display upcoming fixtures.

Embracing New Features and Functionality “The fact that eStream is device independent and works cross-platform is crucial for us,” Carl says. “Every pupil in school has access to different devices, and it would be a nightmare to manage if the system was device or browser-specific. And the fact that you can readily upload from mobile is just fantastic – it doesn’t get any easier than that!” Carl sees significant potential at Oakham for the Planet eStream features that are due to be released shortly. “Around 1,000 new videos are added to our library every year, with the current total standing at 5,500,” he says. “Because the system is so heavily used, I think the advanced analytics will be very useful for us from a housekeeping perspective. They will enable us to track what content is viewed, how often, and delete anything that is out of date or no longer needed. That will really help us to keep the archive manageable.” “It will also be good for teachers to see which sections of video clips pupils are viewing. In Citizenship Studies, for example, teachers highlight a lot of news and current affairs items, and particular sections are often key. The advanced analytics will help them understand whether those key sections are being viewed.” “The ability to incorporate documents into the media library will also be great for us. It will make sharing the content of events, such as the recent sports conference, much easier.”

The school has also taken full advantage of the platform customisation tool, and Planet eStream is known to everyone as OakhamTV. “Our Marketing team recently undertook an extensive rebranding exercise, and the fact that we can customise the Planet eStream interface to make it consistent with the rest of the systems we use throughout the school has been ideal,” Carl says.

Unrivalled Support Carl is full of praise for Planet eStream’s functionality and technical support. “The system really is so straightforward to use. 99% of everything here is done by staff, and we receive very few support or technical queries. The new interface has been very well received by everyone and people find the platform intuitive to use. We’ve been using the new interface for most of this academic year and I haven’t had a single person ask me where something has gone!” He believes that the ease of use is in part down to the support that’s available within Planet eStream itself: “I like the fact that if someone is using a particular feature for the first time it will ask if they want any help. That’s a great feature.” “The other thing that I find really helps is the responsiveness of the Planet eStream development team. In fact, this is what I find most impressive about them as an organisation. Whenever we ask ‘can eStream do…?’, the answer is invariably yes. On the rare occasion that the answer is no, the development team can usually make it happen. They are so open to suggestions and feedback, you find yourself working together with them to create a system that not only works for you, but will raise the standard for everyone else who uses the system, too.” “The team genuinely cares about your needs as a customer, and will help you get a system in place that does exactly what you need it to do. They are very much ahead of the game, and have set the bar very high with Planet eStream. In my view, everyone else is playing catch up.”