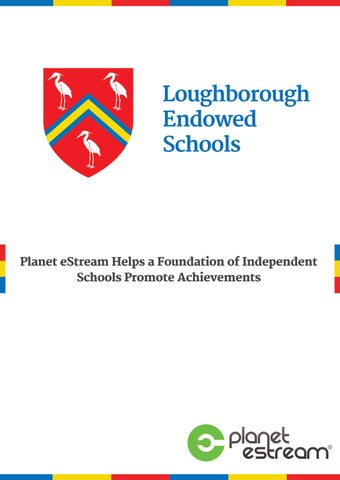 Planet eStream Helps a Foundation of Independent Schools Promote Achievements Striving to become a nationally-recognised centre of musical excellence, Loughborough Endowed Schools prides itself on offering exemplary independent education in the East Midlands. The Loughborough Endowed Schools (LES) Foundation comprises Loughborough Grammar School for boys, Loughborough High School for girls, Our Lady’s Convent School and Fairfield Preparatory School. From January 2016, when a new kindergarten opens at Fairfield, the schools will educate pupils from the age of 3 through to 18. Over 2,200 pupils and 500 staff are based on two neighbouring campuses in the town. In 2006, the Foundation made a major commitment to music education with the establishment of the impressive purpose-built LES Music School. This paved the way for future musical accolades, not least becoming one of only 175 establishments worldwide to achieve ‘All-Steinway School’ status, which now sees it working in partnership with Steinway & Sons - makers of the world’s finest pianos. LES was granted the prestigious All-Steinway School title in September 2015 following fundraising efforts amongst pupils, staff, parents, grandparents, alumni and friends of the schools, which included a week-long ‘practice-a-thon’. The initiative has provided pupils and staff with 23 of the highest calibre pianos on which to learn, teach, practice and perform. To celebrate the arrival of the pianos, an event was held in the school’s recital hall, where ‘Camera Obscura’, a specially commissioned piece of music for 23 pianos was performed. The event was live streamed to staff and the wider LES community via Planet eStream.

Spectacular live streaming Loughborough Endowed Schools’ E-learning Coordinator, Caroline Winship, was responsible for the initial selection of Planet eStream and for using it to capture the All-Steinway School celebrations. She says: “Richard Smeeton, our Director of IT Services met Planet DV at a Firefly VLE conference in November 2014. I visited their stand at the BETT show this year and saw the Planet eStream demonstration. It looked exciting, and ticked all of our boxes in terms of functionality, so we took things from there. We haven’t looked back.”

“Planet eStream came just at the right time,” Caroline says. “It was installed and up and running just in time for us to capture footage of the delivery of our 23 pianos, which was a spectacular sight. This was live streamed with Planet eStream via the Loughborough Endowed Schools’ community website so that our entire school community could be part of the excitement.” “We also live streamed the celebration concert. Capturing this one-off event was so important to us and Planet eStream has helped us create a visual account which will go down in the schools’ history.” “The live streaming capability will be really useful to us, particularly to students who are boarders. We are able to share important events with their families such as sports day, lunchtime concerts and assemblies ensuring they feel connected with school life and the school community.” Caroline Winship - E-learning Coordinator

Integration with the Firefly VLE Loughborough Endowed Schools use Firefly - a popular digital learning platform. Students have each been provided with an iPad to encourage and support e-learning. Using Planet eStream’s innovative Firefly plugin, staff can capture and upload videos to the VLE providing reference materials outside the classroom and empowering students to learn independently and work collaboratively. Both Planet eStream and Firefly are optimised to work on tablets and smartphones, as well as desktops and laptops, to support flipped and blended learning. LES staff upload footage of lessons, film science experiments and TV clips via the Planet eStream app and the Freeview electronic programme guide from their mobile devices ahead of, and during, lessons to provide support material.

Caroline explains: “We encourage students to come to lessons with a better understanding of the topic that is about to be discussed. A rather fun example of this flipped learning was during a recent Year 7 fairy cake-making competition. Our chef uploaded a tutorial video to Firefly via the Planet eStream app demonstrating how to make fairy cakes, so students came to the competition prepared. “We also use the video on-demand functionality to upload specific elements of a programme that are relevant to course subject matter for students to view as part of their homework so they come to lessons well prepared and ready to hit the ground running.”

Enhancing the classroom experience Staff routinely use Planet eStream to capture elements of a lesson to enhance learning. An excellent example of this takes place regularly at Fairfield Preparatory School. The Head of Modern Foreign Languages, Mme Lisa Izard, records classroom video footage of pupils speaking a foreign language on an iPad. She then embeds the footage into our Firefly VLE using the Planet eStream app allowing students to review the video footage within the very same lesson. This has an enormous motivational and learning impact on younger pupils who love the opportunity to watch themselves perform on-screen. “The facility has really captured their imaginations and inspired them to work even harder in the subject,” says Lisa.

Things to come The Foundation has invested in a new state of the art school building at Fairfield Preparatory School, which will open in 2016 with HD information screens installed in the reception areas. “We’ll use the Planet eSign digital signage functionality included with Planet eStream to operate the system, which will largely be used to celebrate pupils’ work,” Caroline confirms.

“We love the Planet eStream system, and our students have really engaged with it. It enables us to maximise learning both inside and outside the classroom. The Planet DV team always responds quickly, and we’ve had a really positive experience of working with them,”

Richard Smeeton adds: “We see endless possibilities for the use of Planet eStream in our schools, which we’re looking forward to exploring further over the coming months and years.”