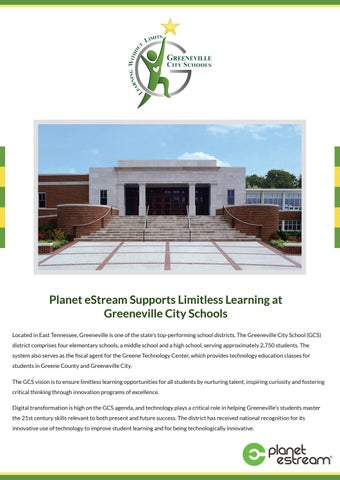 Planet eStream Supports Limitless Learning at Greeneville City Schools Located in East Tennessee, Greeneville is one of the stateâ&#x20AC;&#x2122;s top-performing school districts. The Greeneville City School (GCS) district comprises four elementary schools, a middle school and a high school, serving approximately 2,750 students. The system also serves as the ďŹ scal agent for the Greene Technology Center, which provides technology education classes for students in Greene County and Greeneville City. The GCS vision is to ensure limitless learning opportunities for all students by nurturing talent, inspiring curiosity and fostering critical thinking through innovation programs of excellence. Digital transformation is high on the GCS agenda, and technology plays a critical role in helping Greenevilleâ&#x20AC;&#x2122;s students master the 21st century skills relevant to both present and future success. The district has received national recognition for its innovative use of technology to improve student learning and for being technologically innovative.

Searching for the Right Solution GCS had been struggling to ﬁnd effective video storage, retrieval and archiving, digital signage and live streaming solutions to support its digital transformation agenda. In 2017, Senior Chief Technology Ofﬁcer Beverly Miller travelled to the UK to attend the annual British Education Training and Technology (BETT) event, and was ‘blown away’ by the technology on offer in the UK market. Beverly set about exploring options for giving Greeneville City Schools a more effective way of archiving and retrieving video content; a better way of live streaming events; and an expanded digital presence. It soon became apparent that Planet eStream offered exactly what GCS was looking for. “I had a number of one-to-ones with the Planet eStream team at the BETT show to understand the practical uses for the product, and I returned to the US with Planet eStream at the top of my list of solutions to explore in more depth,” Beverly says.

An Easy Decision IT Network Administrator Larry Jones worked with Beverly to assess the shortlisted solutions, and was very quickly impressed by Planet eStream’s capabilities.

“A lot of the products we’d previously tried weren’t really designed for use in education, and it was hard to get them to work,” Larry says. “As soon as I started working through what Planet eStream can do, it was apparent that everyone there had eaten their Wheaties! They’ve really gone the extra step in making a system that works for the education market. “It’s easy to set up, it’s intuitive to use, and the Planet eStream team are a pleasure to do business with. For these reasons, we decided to roll out Planet eStream full scale across the GCS district, and the implementation was simple, requiring little input from district personnel.”

A Responsive Team “Very early in the process we realised the Planet eStream team is a quality group of people,” Larry says. “Despite the fact that they are ﬁve time zones away from me, I have always been able to get the help, assistance, and support I need. “They will stay on the line to see any query through to the end and, despite the signiﬁcant time difference, I don’t recall ever going for more than an hour and a half without hearing back from them. 99% of the time, the solution they send me works, but if I do need more help, they will arrange a call or a screen share the next day to resolve it. “The team is very knowledgeable, and they’re very happy to share that knowledge with us, giving us shortcuts and recommendations for other solutions that will support what we want to achieve. This is a world class solution supported by world class people: they know what they are doing and are passionate about delivering content to any user on any device.”

Easy Content Creation and Sharing Involving staff and students is key to digital success at GCS. Larry has a team of people creating and posting ‘how to’ videos for all staff, covering topics such as clearing your Firefox cache, changing passwords and sharing content. “It’s those little things that enable people to do more for themselves,” he says. “People would rather take out their phone and watch a quick video, so we’re creating a bank of content that will help people get more out of Planet eStream. The system makes it easy for us to do, and easy for others to access.” Greeneville High School students are making great use of video in their daily GHS news bulletins, which see presenters superimposed onto virtual news desks and locations including the Oval Ofﬁce. Planet eStream has helped introduce ﬂexibility into the daily news bulletins, which were previously broadcast at a speciﬁc time of day. This meant that class teachers had to stop what they were doing to watch. Now, the bulletins are published to the Planet eStream portal, where classes can watch at a time to suit them.

Planet eStream even has a role to play in recruitment across the district. GCS has struggled to recruit school bus drivers, so school video techs took matters into their own hands and ﬁlmed one of the drivers talking about her role. That video is now a featured video on the GCS public page. “I really like that we have a central place for content, where people come to see their children’s morning news, might see this video and think ‘I could do that’,” Larry says. “It’s encouraging creativity within our team and also helping us create opportunities across the district.”

Easy Live Streaming Before using Planet eStream, whenever an event was live streamed, Larry always had to be heavily involved. “I knew there’d be a lot of work for me to get it set up and keep it working. Now, I can just whip out my phone – or any device - and start live streaming. That is just amazing.

“Every spring, Mr. Jamie Chapman, Highland Elementary School Media/Tech Specialist, broadcasts chickens hatching, which involves a two-week live stream. Before Planet eStream, we had to take kit the size of a toaster oven, set it up and then hope and pray nothing happened to interfere with the connection, which it invariably did! “This year, using Planet eStream, we simply took a student’s laptop, pointed the webcam at the incubator and ran it for two weeks. The hatchings are watched by children and their families in the evenings, and by the local community, too. It’s a fantastic thing, and now it just works so well. Our next goal is to live stream the town’s annual Christmas parade.”

Making Memories Every year, the Greeneville High School graduation is live streamed for parents and families around the district and beyond. Planet eStream is helping the event run far more smoothly for Larry and his team: “As well as being able to show a number of live streams on Planet eStream at any one time, the preparation time for live streaming events is now greatly reduced. I can walk in 20 minutes before the event, pick my student camera operator and be conﬁdent everything will work,” he says.

“Previously, I would also have had to be there the morning after graduation, and it would have taken up to eight hours to transcode the footage. This year, the footage was transcoded and live by the following morning.” As well as making the live stream more reliable, Planet eStream has helped GCS add another element to the graduation event, as Larry explains: “I’ve always aspired to include ‘picture in picture’ footage in our graduation stream, and Planet eStream is the ﬁrst system to give us this capability. In the past we had a camera on the stage, recording each student as they collected their Diploma, with a close up picture taken by a photographer as they stepped off the stage. “Now, we can position a second video camera next to the photographer, and show the close up photo of each student alongside the main stage footage. The feedback we’ve had from parents has been fantastic.”

“The reliable live streaming capability Planet eStream gives us has beneﬁted the wider community, too. This year, the granddaughter of a community member graduated, but unfortunately the individual wasn’t in good health. Being able to watch the entire event from the comfort of his home was a real blessing for him and his family. It meant all the world for them to see their granddaughter graduate.”

Bringing People Together GCS was keen to expand digital signage across all schools, and Larry had looked at a lot of alternative systems before selecting Planet eStream. He found other systems difﬁcult to work with because they were all very complicated for the end user, and required someone with coding or programming experience to use them. Larry and the GCS team wanted something that teaching staff could use themselves.

“People are very comfortable using the Planet eStream digital signage system,” Larry says. “It’s easy and intuitive to use. You can easily upload a PowerPoint, or even just a URL, which means parents can see what’s on a digital signage screen without even setting foot in the school building. Whether it’s displaying photos from in-school events or reminding parents that it’s photo day tomorrow, Planet eStream absolutely enables us to tell our story and makes it easy for us to do it.” “Just because I’m technical, it doesn’t mean I want the solution we use to be technical. We want everyone to be able to record, store, upload and retrieve video content easily, and that’s exactly what Planet eStream is enabling us to do.

“One of our Elementary technology leaders has really taken the digital signage ball and run with it. She puts lunch menus on there, along with children’s birthdays and the student of the day. And, if there’s been a history lesson where the children have dressed up, by lunchtime there’ll be photos of ‘the roaring 20s’ on the digital signage, which every other student in the building will pass on their way to the cafeteria. Things like that really help bring our schools and students together.”

Driving Digital Transformation As well as being an integral part of learning, video is also becoming more widely used in demonstrating effective teaching practice. State Departments are starting to request video evidence of effective and appropriate teaching practice, and Planet eStream has a role to play. At GCS, they are rolling out classroom recording at Kindergarten level, and Beverly Miller says teachers are becoming more and more comfortable with ﬁlming in the classroom. “We’re also using Planet eStream to support the ﬂipped classroom, blended learning and distance learning across the district,” Beverly says. “Many of our teachers have embraced these methods and several expect pupils to have watched video before lessons. It’s beneﬁcial because it gives children the opportunity to work through things at their own pace and use the classroom to clarify and expand that knowledge.”

‘A Phenomenal Game-Changer’ In just over 12 months, GCS are reaping the beneﬁts of their investment in Planet eStream, and plan to extend its use to take advantage of further functionality, such as interactive quizzes and staff development tools. Larry believes Planet eStream is what school districts in the United States are looking for. “Planet eStream is a world class solution for school districts looking for a uniﬁed video platform. From our perspective, school districts should consider any other “solution” as distant also-rans. Our experience has been world class from the outset: you must look at, and adopt, this solution.” Beverly Miller adds, “Without a doubt, I see this video platform as a phenomenal game-changer for the education market. Our teachers and students were able to begin using it immediately. The number of live streaming events immediately increased. Finally! A video platform that does not require us to focus on the solution…instead, we can focus on the learning!”