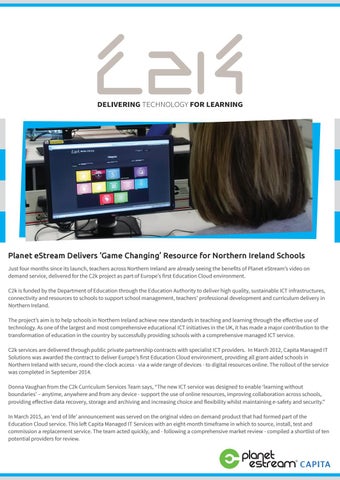 Planet eStream Delivers ‘Game Changing’ Resource for Northern Ireland Schools Just four months since its launch, teachers across Northern Ireland are already seeing the benefits of Planet eStream’s video on demand service, delivered for the C2k project as part of Europe’s first Education Cloud environment. C2k is funded by the Department of Education through the Education Authority to deliver high quality, sustainable ICT infrastructures, connectivity and resources to schools to support school management, teachers’ professional development and curriculum delivery in Northern Ireland. The project’s aim is to help schools in Northern Ireland achieve new standards in teaching and learning through the eﬀective use of technology. As one of the largest and most comprehensive educational ICT initiatives in the UK, it has made a major contribution to the transformation of education in the country by successfully providing schools with a comprehensive managed ICT service. C2k services are delivered through public private partnership contracts with specialist ICT providers. In March 2012, Capita Managed IT Solutions was awarded the contract to deliver Europe’s first Education Cloud environment, providing all grant-aided schools in Northern Ireland with secure, round-the-clock access - via a wide range of devices - to digital resources online. The rollout of the service was completed in September 2014. Donna Vaughan from the C2k Curriculum Services Team says, “The new ICT service was designed to enable ‘learning without boundaries’ – anytime, anywhere and from any device - support the use of online resources, improving collaboration across schools, providing eﬀective data recovery, storage and archiving and increasing choice and flexibility whilst maintaining e-safety and security.” In March 2015, an ‘end of life’ announcement was served on the original video on demand product that had formed part of the Education Cloud service. This left Capita Managed IT Services with an eight-month timeframe in which to source, install, test and commission a replacement service. The team acted quickly, and - following a comprehensive market review - compiled a shortlist of ten potential providers for review.

Meeting Stringent Requirements Donna Vaughan says, “From the C2k perspective, we wanted a video on demand solution that built on the agreed requirements of the previous service, but was capable of much more. The system had to house the existing C2k media archive, allow us to migrate existing video content and map it to new categories in the replacement C2k media library, and give schools flexibility and choice to allow content sharing within their own school or across all schools in Northern Ireland. “We also had strict security parameters and performance requirements. From a security point of view it was important that administrators could restrict the visibility of content to staﬀ only; and it was also important from a performance perspective that the system oﬀered advanced search and fast upload capabilities, worked across a range of devices and browsers and enabled users to easily embed or link media to other C2k services, such as Fronter or C2k Newsdesk.”

Davy Richmond, Operations Director at Capita Managed IT Solutions, adds: “Capita chose Planet eStream as the video on demand solution for NI schools as the solution was designed specifically with education in mind. The interface is simple to use and it has the flexibility to be accessed across a range of devices, from desktop to Android and iOS – it ticked every box. “The solution is cost-eﬀective, delivering all the features required without having to invest in additional software, while oﬀering the flexibility for bespoke development if needed in the future. The Planet eStream team were fantastic to work with, providing advice along the way and engaging our team from initial design to deployment.”

A Smooth, Eﬃcient Rollout A project team representing Capita, C2k and Planet eStream was assembled in March 2015, and met regularly throughout the eight-month consultation, specification, installation and switchover period. The consultation phase involved mapping out the video on demand system requirements in detail, which informed bespoke development work undertaken by the Planet eStream development team over the summer on the user interface and specific administrator tools to deal with high volume end user databases. The system was installed in Capita’s test environment in August 2015 and set up for user acceptance testing, which took place through September. It was then installed into the live production environment for further testing throughout October. Planet DV Managing Director Wendy Robinson, says, “Throughout the design, build and testing phases we worked extremely closely with C2k and Capita to ensure that the service would meet - and, we hoped, exceed - their requirements and expectations.”

The Planet eStream team provided training for C2k staﬀ, Capita support technicians and staﬀ from a pilot school in October 2015, as well as producing and uploading bespoke video tutorials and help documents to the system. Further testing was carried out by staﬀ in the pilot school in early November, and the system went live to all schools in mid-November 2015. C2k’s Tim Matchett says, “A project of this scale – over 1,100 schools - brings with it many challenges, particularly the sharing requirements within and across all schools, but Planet eStream’s technical team had no trouble providing a configuration that met those needs. “It was a pleasure to work with them throughout the project, which was delivered on time and to our exact requirements. It was also refreshing to work with a team of professionals and experts in their field, who not only provided solutions but also took into account suggestions for future developments on product functionality.”

Much More than a Video On Demand Service Donna Vaughan says that schools across Northern Ireland are already seeing beyond Planet eStream’s video on demand functionality to the blended learning and flipped classroom capabilities the system provides. “People are saying that they find the ability to link to videos on Planet eStream from the Fronter VLE very useful, and also that they see potential for the playlist and chapter features to ultimately enable entire lessons to be delivered online, making the idea of Courseware relevant in their schools.” Users are also praising the system’s flexibility, in particular the ability to upload more than one video at once and the speed at which Planet eStream uploads and converts video. The feedback from schools is that eStream is very fast, intuitive and easy to use and Gerry Noble, a teacher who took part in the school pilot, agrees: “I was able to upload 10 videos in five minutes this morning. This is a much improved resource and one that I can see us using a lot. Thanks for the excellent training and your vision for this.”

A ‘Game Changer’ Many users value Planet eStream’s ability to support blended learning by giving both teachers and students access to the media library from home and the ability to view and upload content from desktop or mobile devices. One teacher referred to the ability to upload video directly from an iPad as ‘a game changer’.

An Excellent Resource Teaching staﬀ like the fact that the system is easy and intuitive to use. “They have praised the ease with which they can rename or delete videos and create playlists and chapters, which in turn enables them to structure individual lessons to suit specific learning goals. It is also easy to add notes and other resources to videos to create composite lessons,” Donna says.

Creating Opportunities for Collaborating and Sharing Planet eStream has been praised for giving schools the ability to share video, both within schools and within the wider Northern Ireland-wide schools network, and also to securely control who can see what. “The system gives teaching staﬀ a quick and easy way to showcase school event videos and pupil generated content,” Donna says. “It also provides opportunities for pupils to share or exhibit their multimedia work, both with other schools and also with parents.”

An Exciting Future Ahead In the months since its rollout, feedback and video viewing and archiving statistics show how teaching staﬀ across Northern Ireland are embracing the new C2k media library powered by Planet eStream. “Schools have quickly come to realise that this is much more than a video on demand service, and are seeing the opportunities it provides for flipping the classroom. They are very excited about the potential Planet eStream oﬀers for enhancing learning and teaching going forward,” says Donna.

“The whole Planet eStream team has been eﬀicient, customer focussed and extremely empathetic to the needs of schools and the wider education service. They have been very good at explaining the process and also at ironing out some of the challenges we faced in getting things up and running. “We are looking forward to the next release, which already incorporates many of the updates identified during the pilot, with a sense of well-grounded confidence based on our excellent experience to date.” John Jackson, Technical Services Director at Planet DV, adds, “This has been a great project for our team to be involved in and it is very rewarding to see uptake by the C2k schools at such an encouraging level so soon after rollout. We are now looking forward to the next phase of the project, which will involve liaising closely with C2k and Capita to deliver some other exciting Planet eStream features to C2k schools. We hope to build on the success that has been achieved so far and create a world class media management and delivery platform for C2k.”

Just four months since its launch, teachers across Northern Ireland are already seeing the benefits of Planet eStream’s video on demand serv...

Just four months since its launch, teachers across Northern Ireland are already seeing the benefits of Planet eStream’s video on demand serv...