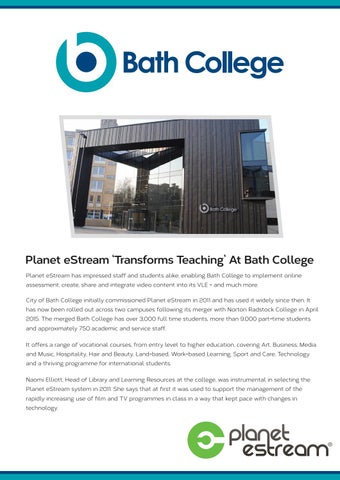 Planet eStream â&#x20AC;&#x2DC;Transforms Teachingâ&#x20AC;&#x2122; At Bath College Planet eStream has impressed staff and students alike, enabling Bath College to implement online assessment; create, share and integrate video content into its VLE - and much more. City of Bath College initially commissioned Planet eStream in 2011 and has used it widely since then. It has now been rolled out across two campuses following its merger with Norton Radstock College in April 2015. The merged Bath College has over 3,000 full time students, more than 9,000 part-time students and approximately 750 academic and service staff. It offers a range of vocational courses, from entry level to higher education, covering Art, Business, Media and Music, Hospitality, Hair and Beauty, Land-based, Work-based Learning, Sport and Care, Technology and a thriving programme for international students. Naomi Elliott, Head of Library and Learning Resources at the college, was instrumental in selecting the Planet eStream system in 2011. She says that at first it was used to support the management of the rapidly increasing use of film and TV programmes in class in a way that kept pace with changes in technology.

“We were looking for a solution that would cut down the amount of time we were spending recording and retrieving digital content, but I’m amazed at how much Planet eStream changed almost everything we do in a relatively short space of time.”

“Initially, we were using it to digitise our existing archive and as a time-saving device for our Learning Resources, ICT and ILT staff who had previously been provided with recording equipment, individually recording numerous TV programmes, storing and retrieving thousands of VHS tapes and DVDs which could only be shared with one user at a time. We soon started using the TV and radio recording functionality, too, and staff started setting programme viewing as homework and embedding video into our virtual learning environment. “Planet eStream has completely transformed the way we create, record and share video resources across all departments. Teachers often arrive in college saying, ‘I saw a great programme last night which I’d like to share with the class – can you find it?’ With Planet eStream, we can accommodate this kind of request instantly.” Over the last two years, Naomi says use of Planet eStream has evolved across the college, with more and more staff across a range of departments making use of the resource. But she says it is student content creation and online assessment that have really taken off: “Planet eStream has become part of life here. More and more staff and students are using it, and discovering the huge variety of functionality the system offers – from recording TV programmes through to changing the way assignments are assessed.”

Enabling Online Assessment Planet eStream has enabled the introduction of online assessment at Bath College across several subject areas, which Naomi says is transforming the way work is created and graded. The uploading of student presentations and recordings is now one of the most popular uses of Planet eStream. It has become invaluable for performance analysis in departments such as performing arts and sport, who share recordings of their own performances for review with peers and staff. They also review recordings of professional performances, and this has become an essential part of learning at the college. It is also widely used as part of formal course assessments, particularly in sport, business, computing and work-based learning. “It really has changed the way assessments are done in these departments, and is such a big part of teaching,” says Naomi. “The sports department, for example, use it for all of their analysis – students are constantly recording each other, then uploading the footage, which course tutors can grade, adding comments and feedback. “Our work-based learning team now uses Planet eStream extensively ‘in the field’ to assess students in apprenticeship roles in businesses. Instead of written observation, assessment evidence of apprentices taking minutes of meetings, taking phone calls and interacting with customers is routinely filmed on tablets, uploaded to Planet eStream and assessed on this basis.”

VLE Integration One of the biggest benefits to the college is that Planet eStream has enabled staff and students to access a large collection of subject-relevant TV programmes, video resources and student projects, which are now widely available across a variety of platforms and devices and can be accessed from anywhere with an internet connection, at any time. This is a big step forward from recordings only being accessible through DVD or VHS and only available to one person at a time, and it has allowed staff to concentrate on using eStream in innovative ways – both in class and via the college’s virtual learning environment (VLE). Teaching staff use Planet eStream's Moodle plugin to upload and embed their content into Moodle, providing support material for lessons and to set homework. One of the college’s biology teachers films himself conducting science experiments in the lab. Using the plugin, he then embeds the video within the Moodle course and shares it with the class as part of lesson preparation. “We now record double the number of TV programmes and we have seen Freeview viewings increase by 313% and video recording viewings by 229%, over two years,” Naomi says. “Being able to embed TV programmes, photosets and videos into Moodle has definitely widened our teaching scope. The fact that playlists are quick and easy to build using Planet eStream and then embed into Moodle is proving invaluable, too.

“Our hairdressing course, for example, created playlists of clips from episodes of EastEnders to demonstrate customer service to students. Those playlists are shared via a course Facebook group and embedded in their Moodle course for students to watch and complete assignments, and Planet eStream has allowed them to be created and shared quickly and simply.”

Enhancing Digital Communication Since the merger of the two colleges, Bath College has increasingly used Planet eStream's digital signage module, Planet eSign, to share information. The signage is used to promote key events, apprenticeship opportunities and display timetables for evening classes. Computing students are currently utilising the function to help communicate messages as part of their ‘safety at night’ campaign, and the Students’ Union has been using it to promote freshers‘ fair events. Some of the college’s 10 signage screens are now used on a weekly basis to replay the team’s Wednesday football matches, and ‘Thursday football review’ has become a regular fixture in the sports department. “For the majority of departments and students, Planet eStream is embedded in the way a lot of our subjects are taught. It has completely changed the way we teach in a relatively short space of time. All of our departments are using Planet eStream in some way or other and staff have benefitted from it across the board.”

Quick and Easy Access to Content Planet eStream has also helped facilitate the recent merger process. “It has enabled staff to instantly share information across departments and campuses, eliminating the disruption commonly associated with putting new systems in place,” says Naomi. “The teachers who are new to Planet eStream are hugely impressed. They had over 500 DVDs in their collection, which were held centrally in the Library and staff had to rush to borrow them in between lessons. We found that 450 were TV recordings, so they are now in our archive for teachers to access – and share – instantly “The new interface has come at just the right time for us, too. At a time when we are embracing a new identity as an organisation, the fresh new look and the ability to ‘brand’ the interface is ideal.”

Live Streaming Capabilities The college has made good use of Planet eStream’s live streaming functionality, allowing them to share events with users anytime, anywhere, and maximising audience reach. The team recently used live streaming to share a local hustings event ahead of the General Election in May and eStream users were able to watch the debate live on their chosen device from their chosen location.

Transforming Teaching “As the head of the team responsible for running the library and study rooms, and supporting students in finding and using a range of print, digital and online resources, I was looking for a streaming system that would transform our existing labour intensive methods of recording, retrieving and sharing information digitally. In Planet eStream I’ve found that – and we are so pleased with it,” Naomi says. “The system is very straightforward to use, which makes it more accessible to all staff, not just the more technical members of the team. The in-built ‘help’ section is very good, and Planet DV is hands down the best company we deal with. They always find a solution, and with this system they have gone above and beyond anything we’d ever imagined.

“Planet eStream really has completely changed the way we teach. We’re a forward looking organisation, always keen to embrace new teaching methods. Planet eStream has enabled us to do everything we’ve wanted to do – and more.”