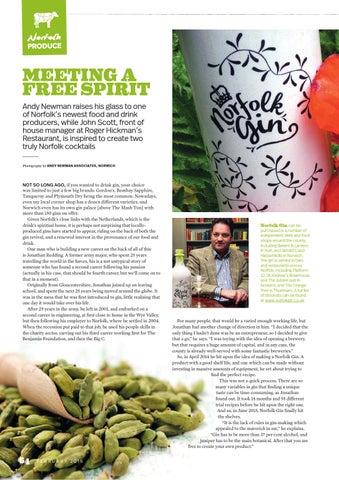 NOT SO LONG AGO, if you wanted to drink gin, your choice was limited to just a few big brands: Gordon’s, Bombay Sapphire, Tanqueray and Plymouth Dry being the most common. Nowadays, even my local corner shop has a dozen different varieties, and Norwich even has its own gin palace [above The Mash Tun] with more than 150 gins on offer. Given Norfolk’s close links with the Netherlands, which is the drink’s spiritual home, it is perhaps not surprising that locallyproduced gins have started to appear, riding on the back of both the gin revival, and a renewed interest in the provenance of our food and drink. One man who is building a new career on the back of all of this is Jonathan Redding. A former army major, who spent 25 years travelling the world in the forces, his is a not untypical story of someone who has found a second career following his passion (actually in his case, that should be fourth career, but we’ll come on to that in a moment). Originally from Gloucestershire, Jonathan joined up on leaving school, and spent the next 25 years being moved around the globe. It was in the mess that he was first introduced to gin, little realising that one day it would take over his life. After 25 years in the army, he left in 2001, and embarked on a second career in engineering, at first close to home in the Wye Valley, but then following his employer to Norfolk, where he settled in 2004. When the recession put paid to that job, he used his people skills in the charity sector, carving out his third career working first for The Benjamin Foundation, and then the Big C.

Norfolk Gin can be

purchased in a number of independent delis and food shops around the county, including Bakers & Larners in Holt, and Jarrold’s and HarperWells in Norwich. The gin is served in bars and restaurants across Norfolk, including Platform 12, St Andrew’s Brewhouse and The Jubilee pub in Norwich, and The Orange Tree in Thornham. A full list of stockists can be found at www.norfolkgin.co.uk

For many people, that would be a varied enough working life, but Jonathan had another change of direction in him. “I decided that the only thing I hadn’t done was be an entrepreneur, so I decided to give that a go,” he says. “I was toying with the idea of opening a brewery, but that requires a huge amount of capital, and in any case, the county is already well-served with some fantastic breweries.” So, in April 2014 he hit upon the idea of making a Norfolk Gin. A product with a good shelf life, and one which can be made without investing in massive amounts of equipment, he set about trying to find the perfect recipe. This was not a quick process. There are so many variables in gin that finding a unique taste can be time-consuming, as Jonathan found out. It took 14 months and 55 different trial recipes before he hit upon the right one. And so, in June 2015, Norfolk Gin finally hit the shelves. “It is the lack of rules in gin-making which appealed to the maverick in me,” he explains. “Gin has to be more than 37 per cent alcohol, and juniper has to be the main botanical. After that you are free to create your own product.” 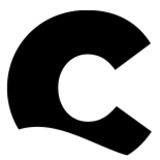 The Magazine for Norfolk & North Suffolk

The Magazine for Norfolk & North Suffolk