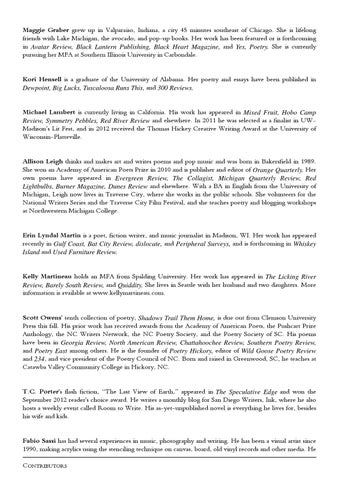 Maggie Graber grew up in Valparaiso, Indiana, a city 45 minutes southeast of Chicago. She is lifelong friends with Lake Michigan, the avocado, and pop-up books. Her work has been featured or is forthcoming in Avatar Review, Black Lantern Publishing, Black Heart Magazine, and Yes, Poetry. She is currently pursuing her MFA at Southern Illinois University in Carbondale. Kori Hensell is a graduate of the University of Alabama. Her poetry and essays have been published in Dewpoint, Big Lucks, Tuscaloosa Runs This, and 300 Reviews. Michael Lambert is currently living in California. His work has appeared in Mixed Fruit, Hobo Camp Review, Symmetry Pebbles, Red River Review and elsewhere. In 2011 he was selected as a finalist in UWMadison’s Lit Fest, and in 2012 received the Thomas Hickey Creative Writing Award at the University of Wisconsin-Platteville. Allison Leigh thinks and makes art and writes poems and pop music and was born in Bakersfield in 1989. She won an Academy of American Poets Prize in 2010 and is publisher and editor of Orange Quarterly. Her own poems have appeared in Evergreen Review, The Collagist, Michigan Quarterly Review, Red Lightbulbs, Burner Magazine, Dunes Review and elsewhere. With a BA in English from the University of Michigan, Leigh now lives in Traverse City, where she works in the public schools. She volunteers for the National Writers Series and the Traverse City Film Festival, and she teaches poetry and blogging workshops at Northwestern Michigan College. Erin Lyndal Martin is a poet, fiction writer, and music journalist in Madison, WI. Her work has appeared recently in Gulf Coast, Bat City Review, dislocate, and Peripheral Surveys, and is forthcoming in Whiskey Island and Used Furniture Review. Kelly Martineau holds an MFA from Spalding University. Her work has appeared in The Licking River Review, Barely South Review, and Quiddity. She lives in Seattle with her husband and two daughters. More information is available at www.kellymartineau.com. Scott Owens' tenth collection of poetry, Shadows Trail Them Home, is due out from Clemson University Press this fall. His prior work has received awards from the Academy of American Poets, the Pushcart Prize Anthology, the NC Writers Network, the NC Poetry Society, and the Poetry Society of SC. His poems have been in Georgia Review, North American Review, Chattahoochee Review, Southern Poetry Review, and Poetry East among others. He is the founder of Poetry Hickory, editor of Wild Goose Poetry Review and 234, and vice president of the Poetry Council of NC. Born and raised in Greenwood, SC, he teaches at Catawba Valley Community College in Hickory, NC. T.C. Porter's flash fiction, “The Last View of Earth,” appeared in The Speculative Edge and won the September 2012 reader's choice award. He writes a monthly blog for San Diego Writers, Ink, where he also hosts a weekly event called Room to Write. His as-yet-unpublished novel is everything he lives for, besides his wife and kids. Fabio Sassi has had several experiences in music, photography and writing. He has been a visual artist since 1990, making acrylics using the stenciling technique on canvas, board, old vinyl records and other media. He CONTRIBUTORS 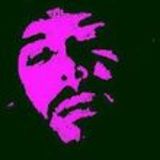