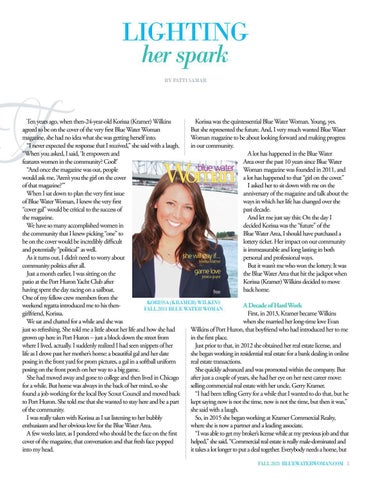 Ten years ago, when then-24-year-old Korissa (Kramer) Wilkins Korissa was the quintessential Blue Water Woman. Young, yes. agreed to be on the cover of the very first Blue Water Woman But she represented the future. And, I very much wanted Blue Water magazine, she had no idea what she was getting herself into. Woman magazine to be about looking forward and making progress “I never expected the response that I received,” she said with a laugh. in our community. “When you asked, I said, ‘It empowers and A lot has happened in the Blue Water features women in the community? Cool!’ Area over the past 10 years since Blue Water “And once the magazine was out, people Woman magazine was founded in 2011, and would ask me, ‘Aren’t you the girl on the cover a lot has happened to that “girl on the cover.” of that magazine?’” I asked her to sit down with me on the When I sat down to plan the very first issue anniversary of the magazine and talk about the of Blue Water Woman, I knew the very first ways in which her life has changed over the “cover gal” would be critical to the success of past decade. the magazine. And let me just say this: On the day I We have so many accomplished women in decided Korissa was the “future” of the the community that I knew picking “one” to Blue Water Area, I should have purchased a be on the cover would be incredibly difficult lottery ticket. Her impact on our community and potentially “political” as well. is immeasurable and long lasting in both As it turns out, I didn’t need to worry about personal and professional ways. community politics after all. But it wasn’t me who won the lottery. It was Just a month earlier, I was sitting on the the Blue Water Area that hit the jackpot when patio at the Port Huron Yacht Club after Korissa (Kramer) Wilkins decided to move having spent the day racing on a sailboat. back home. One of my fellow crew members from the KORISSA (KRAMER) WILKINS weekend regatta introduced me to his thenA Decade of Hard Work FALL 2011 BLUE WATER WOMAN girlfriend, Korissa. First, in 2013, Kramer became Wilkins We sat and chatted for a while and she was when she married her long-time love Evan just so refreshing. She told me a little about her life and how she had Wilkins of Port Huron, that boyfriend who had introduced her to me grown up here in Port Huron – just a block down the street from in the first place. where I lived, actually. I suddenly realized I had seen snippets of her Just prior to that, in 2012 she obtained her real estate license, and life as I drove past her mother’s home: a beautiful gal and her date she began working in residential real estate for a bank dealing in online posing in the front yard for prom pictures, a gal in a softball uniform real estate transactions. posing on the front porch on her way to a big game. She quickly advanced and was promoted within the company. But She had moved away and gone to college and then lived in Chicago after just a couple of years, she had her eye on her next career move: for a while. But home was always in the back of her mind, so she selling commercial real estate with her uncle, Gerry Kramer. found a job working for the local Boy Scout Council and moved back “I had been telling Gerry for a while that I wanted to do that, but he to Port Huron. She told me that she wanted to stay here and be a part kept saying now is not the time, now is not the time, but then it was,” of the community. she said with a laugh. I was really taken with Korissa as I sat listening to her bubbly So, in 2015 she began working at Kramer Commercial Realty, enthusiasm and her obvious love for the Blue Water Area. where she is now a partner and a leading associate. A few weeks later, as I pondered who should be the face on the first “I was able to get my broker’s license while at my previous job and that cover of the magazine, that conversation and that fresh face popped helped,” she said. “Commercial real estate is really male-dominated and into my head. it takes a lot longer to put a deal together. Everybody needs a home, but FALL 2021 BLUEWATERWOMAN.COM 5