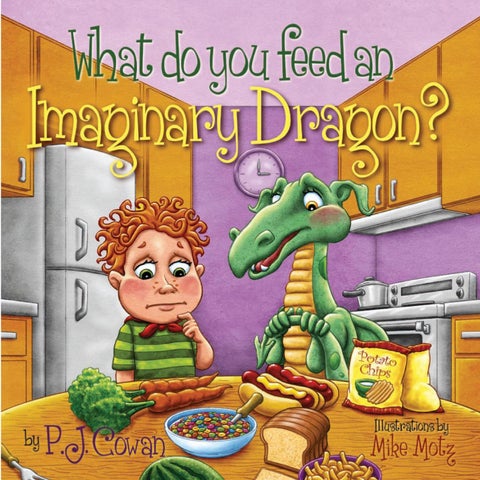 T.J.â&#x20AC;&#x2122;s favorite daydream was about having his very own dragon. T.J. daydreamed about it so often that he gave it a name, Max. He sometimes imagined he could see Max standing right there in front of him. One day T.J. was out in the back yard imagining he was a dragon slayer. All of a sudden, there was a burst of color and a bright green dragon flew over the bushes. It was a fierce-looking dragon, with sharp teeth, long wicked-looking claws, and scary red eyes. The dragon roared loudly, flapped its wings and landed on the ground in front of T.J..

At first T.J. was afraid of the dragon, but as he looked closer, the dragon began to change. The longer T.J. looked, the more it changed. It lost all of the scary things the sharp teeth, the red eyes and the claws. Now T.J. recognized the dragon. It was his dragon friend Max looking just as he imagined, standing right here in front of him. He reached out and petted the dragon. Max nuzzled his hand. The two were instant friends.

Max the dragon announced, “I have come a long way and I am very hungry.” T.J. asked Max what he wanted to eat. “I don’t know,” Max answered. “You imagined me. You should know what I like to eat.” T.J. had never imagined the dragon eating anything. He only imagined him carrying him on his back, and playing in the yard together. The two went into the kitchen and T.J. fixed all of his own favorite foods for Max. T.J. tried carrots… that didn’t work. T.J. tried hot dogs… that didn’t work. T.J. tried cereal and milk; T.J. tried macaroni and cheese. He even tried to feed Max potato chips and pizza and watermelon and whole grain bread. T.J. tried everything in the kitchen, but the hungry dragon would not eat them.

Finally, Max said, “If I don’t eat soon, I will have to leave.” T.J. felt terrible. His dragon friend was starving and he didn’t know what to feed him. T.J. decided to ask his Mom for advice. He took Max to his bedroom and hid him behind the door so he could listen. T.J. asked his Mom, “If I had an imaginary dragon friend, what would I feed it?” Mom laughed, thinking this was a riddle. “That’s an easy one,” she answered. “You would feed an imaginary dragon, imaginary dragon food.” “Why didn’t I think of that?” T.J. thought. He and Max went back out to the hedge and T.J. imagined a nice big meal of raw fish and juicy seaweed for his imaginary dragon friend. Now that he was well fed, Max could stay and play with T.J. for as long as he liked.

T.J. never did outgrow his imagination. He grew up and wrote all of his daydreams and imaginings into stories, which he published in children’s books. T.J.’s first story was about Max. Max read the story over and over again. He liked seeing his name and picture in bright color on its pages. Imaginary friends usually go away when we grow up, but T.J. fed Max his favorite imaginary foods and Max liked T.J., so he decided to stick around for as long as T.J. wanted him too. Max was content to snack on imaginary chocolate chip cookies and read stories over T.J.’s shoulder as he wrote them. The End What Do You Feed An Imaginary Dragon?

The story of T.J. and his imaginary friend, a dragon named Max. The problem, is: What do you feed and imaginary dragon?

What Do You Feed An Imaginary Dragon?

The story of T.J. and his imaginary friend, a dragon named Max. The problem, is: What do you feed and imaginary dragon?