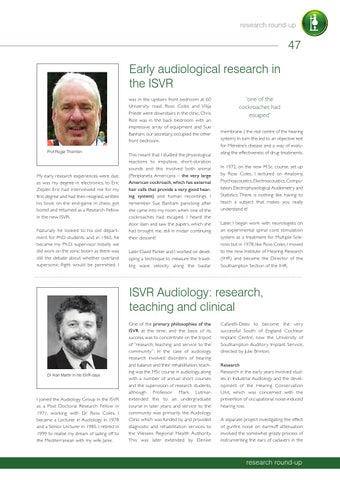 47 Early audiological research in the ISVR was in the upstairs front bedroom at 60 University road. Ross Coles and Vilija Priede were downstairs in the clinic, Chris Rice was in the back bedroom with an impressive array of equipment and Sue Banham, our secretary, occupied the other front bedroom. Prof Roger Thornton

My early research experiences were due, as was my degree in electronics, to Eric Zepler. Eric had interviewed me for my first degree and had then resigned, written his book on the end-game in chess, got bored and returned as a Research Fellow in the new ISVR. Naturally he looked to his old department for PhD students and, in 1965, he became my Ph.D. supervisor. Initially we did work on the sonic boom as there was still the debate about whether overland supersonic flight would be permitted. I

This meant that I studied the physiological reactions to impulsive, short-duration sounds and this involved both animal (Periplaneta Americana – the very large American cockroach, which has external hair cells that provide a very good hearing system) and human recordings. I remember Sue Banham panicking after she came into my room when one of the cockroaches had escaped. I heard the door slam and saw the papers, which she had brought me, still in midair continuing their descent! Later David Parker and I worked on developing a technique to measure the travelling wave velocity along the basilar

‘one of the cockroaches had escaped’ membrane ( the real centre of the hearing system). In turn this led to an objective test for Ménière’s disease and a way of evaluating the effectiveness of drug treatments. In 1972, on the new M.Sc. course, set up by Ross Coles, I lectured on Anatomy, Psychoacoustics, Electroacoustics, Computation, Electrophysiological Audiometry and Statistics. There is nothing like having to teach a subject that makes you really understand it! Later, I began work with neurologists on an experimental spinal cord stimulation system as a treatment for Multiple Sclerosis but in 1978, like Ross Coles, I moved to the new Institute of Hearing Research (IHR) and became the Director of the Southampton Section of the IHR.

I joined the Audiology Group in the ISVR as a Post Doctoral Research Fellow in 1971, working with Dr Ross Coles. I became a Lecturer in Audiology in 1978 and a Senior Lecturer in 1985. I retired in 1999 to realise my dream of sailing off to the Mediterranean with my wife Janie.

One of the primary philosophies of the ISVR at the time, and the basis of its success, was to concentrate on the tripod of “research, teaching and service to the community”. In the case of audiology, research involved disorders of hearing and balance and their rehabilitation; teaching was the MSc course in audiology, along with a number of annual short courses and the supervision of research students, although Professor Mark Lutman extended this to an undergraduate course in later years; and service to the community was primarily the Audiology Clinic which was funded by and provided diagnostic and rehabilitation services to the Wessex Regional Health Authority. This was later extended by Denise

Cafarelli-Dees to become the very successful South of England Cochlear Implant Centre, now the University of Southampton Auditory Implant Service, directed by Julie Brinton. Research Research in the early years involved studies in Industrial Audiology and the development of the Hearing Conservation Unit, which was concerned with the prevention of occupational noise-induced hearing loss. A separate project investigating the effect of gunfire noise on earmuff attenuation involved the somewhat grizzly process of instrumenting the ears of cadavers in the Audacity is the publication of the British Society of Audiology. We aim to deliver a magazine that represents the clinical, academic and res...

Audacity is the publication of the British Society of Audiology. We aim to deliver a magazine that represents the clinical, academic and res...