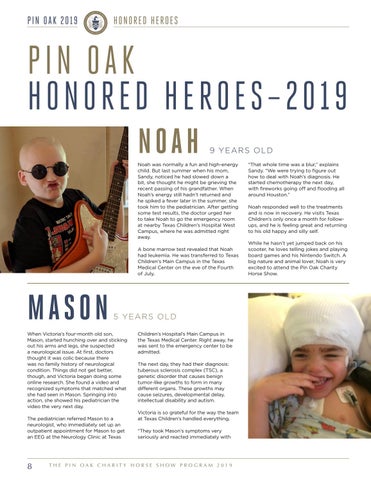 Noah was normally a fun and high-energy child. But last summer when his mom, Sandy, noticed he had slowed down a bit, she thought he might be grieving the recent passing of his grandfather. When Noah’s energy still hadn’t returned and he spiked a fever later in the summer, she took him to the pediatrician. After getting some test results, the doctor urged her to take Noah to go the emergency room at nearby Texas Children’s Hospital West Campus, where he was admitted right away. A bone marrow test revealed that Noah had leukemia. He was transferred to Texas Children’s Main Campus in the Texas Medical Center on the eve of the Fourth of July.

When Victoria’s four-month old son, Mason, started hunching over and sticking out his arms and legs, she suspected a neurological issue. At first, doctors thought it was colic because there was no family history of neurological condition. Things did not get better, though, and Victoria began doing some online research. She found a video and recognized symptoms that matched what she had seen in Mason. Springing into action, she showed his pediatrician the video the very next day. The pediatrician referred Mason to a neurologist, who immediately set up an outpatient appointment for Mason to get an EEG at the Neurology Clinic at Texas

Children’s Hospital’s Main Campus in the Texas Medical Center. Right away, he was sent to the emergency center to be admitted. The next day, they had their diagnosis: tuberous sclerosis complex (TSC), a genetic disorder that causes benign tumor-like growths to form in many different organs. These growths may cause seizures, developmental delay, intellectual disability and autism. Victoria is so grateful for the way the team at Texas Children’s handled everything. “They took Mason’s symptoms very seriously and reacted immediately with

“That whole time was a blur,” explains Sandy. “We were trying to figure out how to deal with Noah’s diagnosis. He started chemotherapy the next day, with fireworks going off and flooding all around Houston.” Noah responded well to the treatments and is now in recovery. He visits Texas Children’s only once a month for followups, and he is feeling great and returning to his old happy and silly self. While he hasn’t yet jumped back on his scooter, he loves telling jokes and playing board games and his Nintendo Switch. A big nature and animal lover, Noah is very excited to attend the Pin Oak Charity Horse Show.