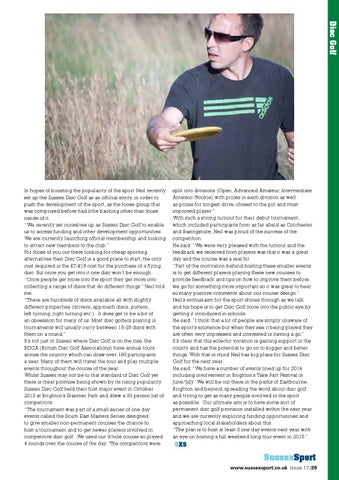 In hopes of boosting the popularity of the sport Neil recently set up the Sussex Disc Golf as an official entity, in order to push the development of the sport, as the loose group that was comprised before had little backing other than those inside of it. “We recently set ourselves up as Sussex Disc Golf to enable us to access funding and other development opportunities. We are currently launching official membership and looking to attract new members to the club.” For those of you out there looking for cheap sporting alternatives then Disc Golf is a good place to start, the only cost required is the £7-£15 cost for the purchase of a flying disc. But once you get into it one disc won’t be enough. “Once people get more into the sport they get more into collecting a range of discs that do different things.” Neil told me. “There are hundreds of discs available all with slightly different properties (drivers, approach discs, putters, left turning, right turning etc.). It does get to be a bit of an obsession for many of us. Most disc golfers playing in tournaments will usually carry between 15-25 discs with them on a round.” It’s not just in Sussex where Disc Golf is on the rise; the BDGA (British Disc Golf Associations) have annual tours across the country which can draw over 180 participants a year. Many of them will travel the tour and play multiple events throughout the course of the year. Whilst Sussex may not be to that standard of Disc Golf yet there is clear promise being shown by its rising popularity. Sussex Disc Golf held their first major event in October 2013 at Brighton’s Stanmer Park and drew a 30 person list of competitors. “The tournament was part of a small series of one day events called the South East Masters Series designed to give smaller non-permanent courses the chance to host a tournament and to get newer players involved in competitive disc golf.  We used our 9 hole course so played 4 rounds over the course of the day.  The competitors were

split into divisions (Open, Advanced Amateur, Intermediate Amateur/Rookie) with prizes in each division as well as prizes for longest drive, closest to the pin and most improved player.” With such a strong turnout for their debut tournament, which included participants from as far afield as Colchester and Basingstoke, Neil was proud of the success of the competition. He said: “We were very pleased with the turnout and the feedback we received from players was that it was a great day and the course was a real hit. “Part of the motivation behind hosting these smaller events is to get different players playing these new courses to provide feedback and tips on how to improve them before we go for something more important so it was great to hear so many positive comments about our course design.” Neil’s enthusiasm for the sport shines through as we talk and his hope is to get Disc Golf more into the public eye by getting it introduced in schools. He said: “I think that a lot of people are simply unaware of the sport’s existence but when they see it being played they are often very impressed and interested in having a go.” It’s clear that this eclectic vocation is gaining support in the county and has the potential to go on to bigger and better things. With that in mind Neil has big plans for Sussex Disc Golf for the next year. He said: “We have a number of events lined up for 2014 including involvement in Brighton’s Take Part Festival in June/July.  We will be out there in the parks of Eastbourne, Brighton and beyond, spreading the word about disc golf and trying to get as many people involved in the sport as possible.  Our ultimate aim is to have some sort of permanent disc golf provision installed within the next year and we are currently exploring funding opportunities and approaching local stakeholders about this. “The plan is to host at least 3 one day events next year with an eye on hosting a full weekend long tour event in 2015.” 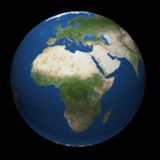 The complete guide to sport in Sussex

The complete guide to sport in Sussex