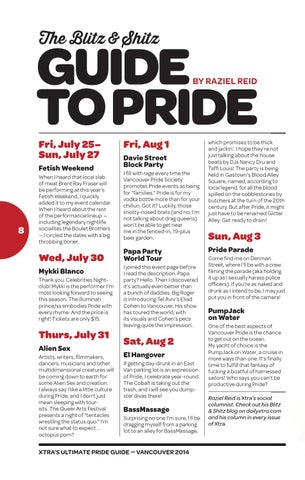 GUIDE TO PRIDE BY RAZIEL REID

When I heard that local slab of meat Brent Ray Fraser will be performing at this year’s Fetish Weekend, I quickly added it to my event calendar. When I heard about the rest of the performance lineup — including legendary nightlife socialites the Boulet Brothers — I circled the dates with a big throbbing boner.

Wed, July 30 Mykki Blanco Thank you, Celebrities Nightclub! Mykki is the performer I’m most looking forward to seeing this season. The illuminati prince/ss embodies Pride with every rhyme. And the price is right! Tickets are only $15.

Fri, Aug 1 Davie Street Block Party I ﬁll with rage every time the Vancouver Pride Society promotes Pride events as being for “families.” Pride is for my vodka bottle more than for your chillun. Got it? Luckily, those snotty-nosed brats (and no, I’m not talking about drag queens) won’t be able to get near me in the fenced-in, 19-plus beer garden.

Papa Party World Tour I joined this event page before I read the description. Papa party? Hello. Then I discovered it’s actually even better than a bunch of daddies. Big Roger is introducing Tel Aviv’s Eliad Cohen to Vancouver. His show has toured the world, with its visuals and Cohen’s pecs leaving quite the impression.

Sat, Aug 2 El Hangover If getting day-drunk in an East Van parking lot is an expression of Pride, I celebrate year-round. The Cobalt is taking out the trash, and I will see you dumpster divas there!

BassMassage Surprising no one I’m sure, I’ll be dragging myself from a parking lot to an alley for BassMassage,

which promises to be thickk and jackin’. I hope they’re not just talking about the house se beats by DJs Nancy Dru and nd Tafﬁ Louis! The party is being ing held in Gastown’s Blood Alley lley Square, named, accordingg to local legend, for all the blood od spilled on the cobblestones es byy butchers at the turn of the e 20th century. But after Pride, it migh might ht just have to be renamed Glitterr Alley. Get ready to drain!

Sun, Aug 3 Pride Parade Come ﬁnd me on Denman Street, where I’ll be with a crew ﬁlming the parade (aka holding ding it up as I sexually harass police olice ofﬁcers). If you’re as naked d and d drunk as I intend to be, I may ay jus just st put you in front of the camera! era!

PumpJack on Water One of the best aspects off Vancouver Pride is the chance ance to get out on the ocean. My yacht of choice is the PumpJack on Water, a cruise ise in n more ways than one. It’s ﬁnally nally time to fulﬁll that fantasy of fucking a boatful of harnessed ssed sailors! Who says you can’tt be productive during Pride? Raziel Reid is Xtra’s sociall columnist. Check out his Blitz & Shitz blog on dailyxtra.com com ssue and his column in every issue of Xtra. 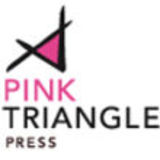