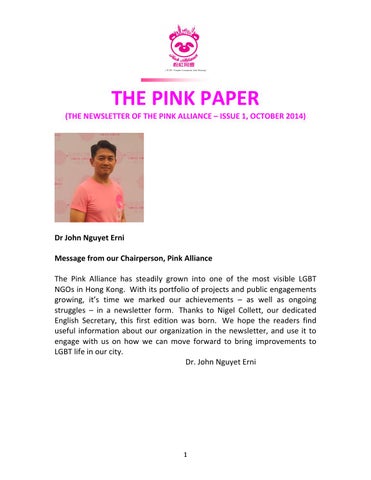 Dr John Nguyet Erni Message from our Chairperson, Pink Alliance The Pink Alliance has steadily grown into one of the most visible LGBT NGOs in Hong Kong. With its portfolio of projects and public engagements growing, it’s time we marked our achievements – as well as ongoing struggles – in a newsletter form. Thanks to Nigel Collett, our dedicated English Secretary, this first edition was born. We hope the readers find useful information about our organization in the newsletter, and use it to engage with us on how we can move forward to bring improvements to LGBT life in our city. Dr. John Nguyet Erni

THE FIRST ISSUE The Pink Alliance has never had a Newsletter and so has not broadcast its activities to the wider community. Many ask what the Pink Alliance is and what it does. This first issue of the Pink Paper, the Pink Alliance’s Newsletter, is intended to answer these questions and to help us involve more of the community in our work. The Newsletters will contain sections to describe our work: one section will cover what is going on at the moment; another will include a short brief on the activities we have been involved in since the last issue; and the third will list what we intend to do in future. This issue, as it is our first, will also contain a short description of what the Pink Alliance does, with some notes on its history. We hope you find the Pink Paper informative and useful. Please circulate it on your own networks as widely as possible. If you would like to contribute pieces to further issues, or to volunteer to work with the Pink Alliance, or to contribute to

our funds, you will find details of how to contact us at the last page. WHAT IS THE PINK ALLIANCE? As its name suggests, the Pink Alliance is an alliance of many of Hong Kong’s LGBT groups. It is not, therefore, a ‘member organisation’, though it has a large number of volunteers who help with projects and activities. It is a registered Hong Kong NGO and has a Central Committee, the PACC, on which sit representatives of all our members, each with an equal vote. Other members of the PACC are appointed to perform functions like Treasurer, Secretary etc. It has a bank account and publishes all its accounts on its web site, TCJM. It also has a Facebook page at Pink Alliance. The chief officers of the PACC are elected by committee members every two years and the current officers have held post since August 2013. The LGBT groups who are members of the Pink Alliance, or who retain liaison with it, are: 1. AIDS Concern

b. Community – we organize LGBT community programmes, including: 1. The Pink Season – every autumn. 2. The International Day Against Homophobia and Transphobia (IDAHOT) – every May. 3. Out in the Open – the beach party held at the end of every Pink Season. 4. Pink Dot – the apolitical gathering of LGBT people and their supporters following the lead of the Singapore event. Each event has a Director or Coordinator appointed by the PACC, who works with a Group of volunteers for each particular task.

A SHORT HISTORY OF THE PINK Our first Chairman was Reggie Ho, ALLIANCE at that stage the leader of HORIZONS, the telephone counselling NGO. He held post until 2013, when Dr John Nguyet Erni took over as Chairperson and Joanne Leung became Vice Chairperson. We have been responsible for running IDAHOT and Out in the Open every year since 2010, as well as Pink Season since 2011 and Pink Dot since this year. Since our birth, we have been involved in many political and social issues, including: 1. Advocating an ordinance to outlaw discrimination We were formed in 2008 as the revival of the by-­‐then moribund 2. Advocating recognition of Tongzhi Community Joint Meeting same-­‐sex relationships. (TCJM), Hong Kong’s first LGBT alliance created in the late Nineties. 3. Lobbying against enforced surgery for transgender We still bear that name. We people seeking official adopted the brand name ‘Pink recognition of their chosen Alliance’ only in 2011 as ‘TCJM’ was gender. too much of a mouthful to use. 4. Fighting the employment by the government of

supporters of ‘reparative therapy’ as instructors on social issues.

WHAT WE ARE DOING NOW

5. Lobbying the government and school authorities to include same-­‐sex relationships in the secondary school syllabus and to institute training in LGBT matters for teachers and social workers. 6. Assisting the fighting of legal cases for transgender marriage and opposing the police use of entertainment licensing to limit street demonstrations.

The Pink Season was founded in 2011 as a joint effort by the Hong Kong Lesbian and Gay Film Festival, Mr Gay Hong Kong, Floatilla and the Pink Alliance, with Anshuman Das (AD) as its first Coordinator. AD handed over the reins to Tay Her Lim in 2012. Our priority work at present is the completion of the 2014 Pink Season, the fourth we have run since inception. The programme crafted by this Season’s Joint Directors, Betty Grisoni and Abby Lee, includes over seventy events, and culminates on 2 November with this year’s Out in the Open beach party, coordinated

7. Advocacy at the United Nations to expose Hong Kong’s failure to abide by the international covenants it has signed. 8. The creation of the I Am Me series of videos, which can be watched on Youtube and found through the I Am Me Facebook page at:

as always by the event’s founder, of the remaining events as you can. Eric Herrera. This Season has seen an increased emphasis on sports -­‐ we have a whole sporting weekend on 25 and 26 October – as well as artistic and cultural performances. Anyone attending this Season’s events can enjoy a discount at the outlets listed in the leaflet. Our current political work includes the dispatch to Geneva of a team of two Pink Alliance representatives, our Vice Chairperson Joanne Leung Betty Grisoni and Abby Lee, Co-­‐ and the joint Chair of QSA, Geoffrey Directors Pink Season Yeung to present our case to the Committee on the Elimination of Discrimination against Women (CEDAW); we are aiming to draw the attention of the UN Committee to the Hong Kong government’s attempt to enforce surgery upon those transgender people seeking official recognition of their chosen gender. We are also making submissions to the Equal Opportunities Commission (EOC) and to the survey instituted by the government’s Advisory Group on Eric Herrera, Coordinator of Out in the Elimination of Discrimination the Open Against Sexual Minorities (AGEDASM) – our representative on A flier with the full list of events is AGEDASM is Reggie Ho, and our attached; do try to come to as many

WHAT WE HAVE BEEN DOING RECENTLY Over the middle of the year, Pink Alliance Advocacy Group members have been involved in a series of political lobbying. We have lobbied two government secretariats, the Security and Health Bureaux, over the government’s draft legislation to introduce marriage for transgender persons in their new gender. We have also lobbied a number of Legislative Councillors for the same purpose. We organized the commemoration of IDAHOT on 17 May this year.

On 15 June, Pink Alliance collaborated with the Big Love Alliance to run Hong Kong’s first Pink Dot in Tamar Park. It was a highly successful occasion, a gathering of over 10,000 people wearing pink to show their support for LGBT rights, as well as a picnic and a musical performance.

Vidler, and their supporters, a huge vote of thanks. WHAT WE SHALL BE DOING SOON We shall spend the next few months preparing for 2015’s IDAHOT commemoration. Joanne Leung will lead the team and will be calling shortly for a meeting of Hong Kong LGBT groups interested in collaborating. Dr John Erni will also be preparing for next year’s Pink Dot, and will be launching this autumn a programme to recruit and train volunteers for this and for all Pink Alliance purposes. We shall participate in Hong Kong’s commemoration of the International Human Rights Day in December. For lovers of literature, British novelist Philip Hensher will be at the Hong Kong International Literary Festival at 5.30 pm on Saturday 9 November to talk about his new book The Emperor Waltz and gay literature. Tash Aw is also in town for the Festival, and I shall be talking about my biography of Leslie Cheung Kwok-­‐wing, Firelight of a Different Colour, over lunch at

The summer saw the final stage of the court case launched by ‘Mr T’ against the police use of the Entertainment Ordinance to stop a dance display at the 2012 IDAHO event. The Police, who had lost at the Court of Appeal, took the case to the Court of Final Appeal, but lost there. They will no longer be able to prevent free expression at demonstrations in future, and we owe ‘Mr T’ and his solicitor, Michael

the Kee Club, also on 9 November. Check out the Festival programme at: http://www.festival.org.hk HELP US! We are always in need of volunteers to help us with our work. Please contact our Volunteer Officer on volunteer@tcjm.org. We rely totally on voluntary contributions to fund us, so please help us if you can. If you would like to contribute funds, please make a direct transfer to the TCJM bank account: Name of Bank: HSBC Account Number: 112-­‐194386-­‐001 Account Name: Tongzhi Community Joint Meeting

Barry Lee, Treasurer, Pink Alliance Please email our Treasurer, Barry Lee at donate@tcjm.org with your name (or nickname), date of transfer, donated amount and receipt number. We shall send you an acknowledgement as soon as the TCJM account is updated.

In conclusion, this being our first issue, we’d welcome feedback, comments and suggestions. You can email us at the email addresses below. 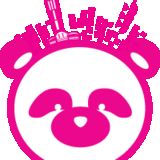