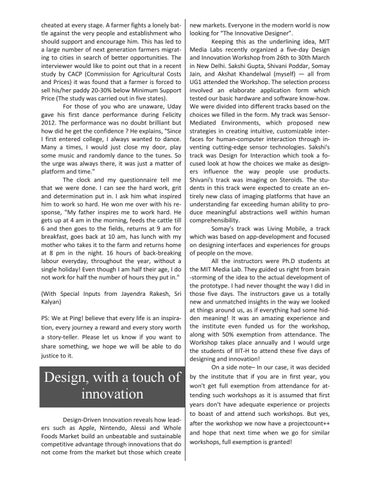 cheated at every stage. A farmer fights a lonely battle against the very people and establishment who should support and encourage him. This has led to a large number of next generation farmers migrating to cities in search of better opportunities. The interviewer would like to point out that in a recent study by CACP (Commission for Agricultural Costs and Prices) it was found that a farmer is forced to sell his/her paddy 20-30% below Minimum Support Price (The study was carried out in five states). For those of you who are unaware, Uday gave his first dance performance during Felicity 2012. The performance was no doubt brilliant but how did he get the confidence ? He explains, "Since I first entered college, I always wanted to dance. Many a times, I would just close my door, play some music and randomly dance to the tunes. So the urge was always there, it was just a matter of platform and time." The clock and my questionnaire tell me that we were done. I can see the hard work, grit and determination put in. I ask him what inspired him to work so hard. He won me over with his response, "My father inspires me to work hard. He gets up at 4 am in the morning, feeds the cattle till 6 and then goes to the fields, returns at 9 am for breakfast, goes back at 10 am, has lunch with my mother who takes it to the farm and returns home at 8 pm in the night. 16 hours of back-breaking labour everyday, throughout the year, without a single holiday! Even though I am half their age, I do not work for half the number of hours they put in." (With Special Inputs from Jayendra Rakesh, Sri Kalyan) PS: We at Ping! believe that every life is an inspiration, every journey a reward and every story worth a story-teller. Please let us know if you want to share something, we hope we will be able to do justice to it.

Design, with a touch of innovation Design-Driven Innovation reveals how leaders such as Apple, Nintendo, Alessi and Whole Foods Market build an unbeatable and sustainable competitive advantage through innovations that do not come from the market but those which create

new markets. Everyone in the modern world is now looking for “The Innovative Designer”. Keeping this as the underlining idea, MIT Media Labs recently organized a five-day Design and Innovation Workshop from 26th to 30th March in New Delhi. Sakshi Gupta, Shivani Poddar, Somay Jain, and Akshat Khandelwal (myself) — all from UG1 attended the Workshop. The selection process involved an elaborate application form which tested our basic hardware and software know-how. We were divided into different tracks based on the choices we filled in the form. My track was SensorMediated Environments, which proposed new strategies in creating intuitive, customizable interfaces for human-computer interaction through inventing cutting-edge sensor technologies. Sakshi's track was Design for Interaction which took a focused look at how the choices we make as designers influence the way people use products. Shivani's track was imaging on Steroids. The students in this track were expected to create an entirely new class of imaging platforms that have an understanding far exceeding human ability to produce meaningful abstractions well within human comprehensibility. Somay's track was Living Mobile, a track which was based on app-development and focused on designing interfaces and experiences for groups of people on the move. All the instructors were Ph.D students at the MIT Media Lab. They guided us right from brain -storming of the idea to the actual development of the prototype. I had never thought the way I did in those five days. The instructors gave us a totally new and unmatched insights in the way we looked at things around us, as if everything had some hidden meaning! It was an amazing experience and the institute even funded us for the workshop, along with 50% exemption from attendance. The Workshop takes place annually and I would urge the students of IIIT-H to attend these five days of designing and innovation! On a side note– In our case, it was decided by the institute that if you are in first year, you won't get full exemption from attendance for attending such workshops as it is assumed that first years don't have adequate experience or projects to boast of and attend such workshops. But yes, after the workshop we now have a projectcount++ and hope that next time when we go for similar workshops, full exemption is granted!