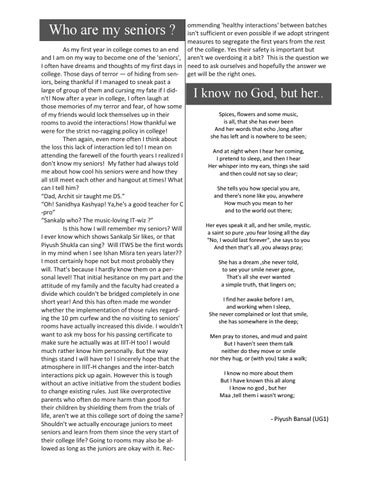 Who are my seniors ?

ommending 'healthy interactions' between batches isn't sufficient or even possible if we adopt stringent measures to segregate the first years from the rest As my first year in college comes to an end of the college. Yes their safety is important but and I am on my way to become one of the 'seniors', aren't we overdoing it a bit? This is the question we I often have dreams and thoughts of my first days in need to ask ourselves and hopefully the answer we college. Those days of terror — of hiding from sen- get will be the right ones. iors, being thankful if I managed to sneak past a large of group of them and cursing my fate if I didn't! Now after a year in college, I often laugh at those memories of my terror and fear, of how some Spices, flowers and some music, of my friends would lock themselves up in their is all, that she has ever been rooms to avoid the interactions! How thankful we And her words that echo ,long after were for the strict no-ragging policy in college! she has left and is nowhere to be seen; Then again, even more often I think about the loss this lack of interaction led to! I mean on And at night when I hear her coming, attending the farewell of the fourth years I realized I I pretend to sleep, and then I hear don't know my seniors! My father had always told Her whisper into my ears, things she said me about how cool his seniors were and how they and then could not say so clear; all still meet each other and hangout at times! What can I tell him? She tells you how special you are, and there's none like you, anywhere “Dad, Archit sir taught me DS.” How much you mean to her “Oh! Sanidhya Kashyap! Ya,he's a good teacher for C and to the world out there; -pro” “Sankalp who? The music-loving IT-wiz ?” Her eyes speak it all, and her smile, mystic. Is this how I will remember my seniors? Will a saint so pure ,you fear losing all the day I ever know which shows Sankalp Sir likes, or that "No, I would last forever", she says to you Piyush Shukla can sing? Will ITWS be the first words And then that’s all ,you always pray; in my mind when I see Ishan Misra ten years later?? I most certainly hope not but most probably they She has a dream ,she never told, will. That's because I hardly know them on a perto see your smile never gone, That's all she ever wanted sonal level! That initial hesitance on my part and the a simple truth, that lingers on; attitude of my family and the faculty had created a divide which couldn't be bridged completely in one I find her awake before I am, short year! And this has often made me wonder and working when I sleep, whether the implementation of those rules regardShe never complained or lost that smile, ing the 10 pm curfew and the no visiting to seniors’ she has somewhere in the deep; rooms have actually increased this divide. I wouldn't want to ask my boss for his passing certificate to Men pray to stones, and mud and paint make sure he actually was at IIIT-H too! I would But I haven’t seen them talk much rather know him personally. But the way neither do they move or smile nor they hug, or (with you) take a walk; things stand I will have to! I sincerely hope that the atmosphere in IIIT-H changes and the inter-batch I know no more about them interactions pick up again. However this is tough But I have known this all along without an active initiative from the student bodies I know no god , but her to change existing rules. Just like overprotective Maa ,tell them i wasn't wrong; parents who often do more harm than good for their children by shielding them from the trials of life, aren't we at this college sort of doing the same? - Piyush Bansal (UG1) Shouldn't we actually encourage juniors to meet seniors and learn from them since the very start of their college life? Going to rooms may also be allowed as long as the juniors are okay with it. Rec-