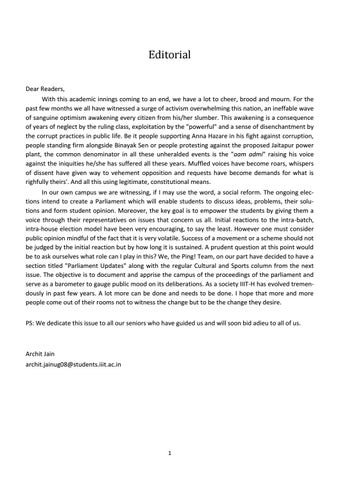 Editorial Dear Readers, With this academic innings coming to an end, we have a lot to cheer, brood and mourn. For the past few months we all have witnessed a surge of activism overwhelming this nation, an ineffable wave of sanguine optimism awakening every citizen from his/her slumber. This awakening is a consequence of years of neglect by the ruling class, exploitation by the "powerful" and a sense of disenchantment by the corrupt practices in public life. Be it people supporting Anna Hazare in his fight against corruption, people standing firm alongside Binayak Sen or people protesting against the proposed Jaitapur power plant, the common denominator in all these unheralded events is the "aam admi" raising his voice against the iniquities he/she has suffered all these years. Muffled voices have become roars, whispers of dissent have given way to vehement opposition and requests have become demands for what is righfully theirs'. And all this using legitimate, constitutional means. In our own campus we are witnessing, if I may use the word, a social reform. The ongoing elections intend to create a Parliament which will enable students to discuss ideas, problems, their solutions and form student opinion. Moreover, the key goal is to empower the students by giving them a voice through their representatives on issues that concern us all. Initial reactions to the intra-batch, intra-house election model have been very encouraging, to say the least. However one must consider public opinion mindful of the fact that it is very volatile. Success of a movement or a scheme should not be judged by the initial reaction but by how long it is sustained. A prudent question at this point would be to ask ourselves what role can I play in this? We, the Ping! Team, on our part have decided to have a section titled "Parliament Updates" along with the regular Cultural and Sports column from the next issue. The objective is to document and apprise the campus of the proceedings of the parliament and serve as a barometer to gauge public mood on its deliberations. As a society IIIT-H has evolved tremendously in past few years. A lot more can be done and needs to be done. I hope that more and more people come out of their rooms not to witness the change but to be the change they desire. PS: We dedicate this issue to all our seniors who have guided us and will soon bid adieu to all of us.