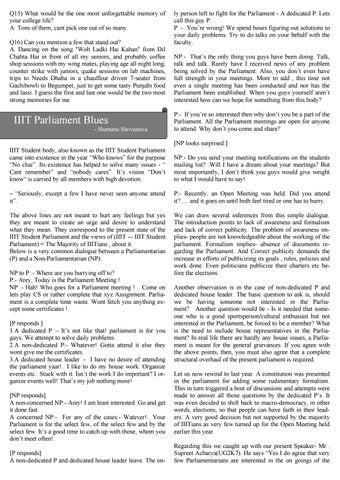 Q15) What would be the one most unforgettable memory of your college life? A: Tons of them, cant pick one out of so many. Q16) Can you mention a few that stand out? A. Dancing on the song "Woh Ladki Hai Kahan" from Dil Chahta Hai in front of all my seniors, and probably coffee shop sessions with my wing mates, playing age all night long, counter strike with juniors, quake sessions on lab machines, trips to Needs Dhaba in a chauffeur driven 7-seater from Gachibowli to Begumpet, just to get some tasty Punjabi food and lassi. I guess the first and last one would be the two most strong memories for me.

ly person left to fight for the Parliament - A dedicated P. Lets call this guy P. P :- You‟re wrong! We spend hours figuring out solutions to your daily problems. Try to do talks on your behalf with the faculty. NP:- That‟s the only thing you guys have been doing. Talk, talk and talk. Rarely have I received news of any problem being solved by the Parliament. Also, you don‟t even have full strength in your meetings. More to add , this time not even a single meeting has been conducted and nor has the Parliament been established. When you guys yourself aren‟t interested how can we hope for something from this body? P:- If you‟re so interested then why don‟t you be a part of the Parliament. All the Parliament meetings are open for anyone to attend. Why don‟t you come and share? [NP looks surprised.]

IIIT Student body, also known as the IIIT Student Parliament came into existence in the year “Who knows” for the purpose “No clue” .Its existence has helped to solve many issues - “ Cant remember” and “nobody cares”. It‟s vision “Don‟t know“ is carried by all members with high devotion.

NP:- Do you send your meeting notifications on the students mailing list? .Will I have a dream about your meetings? But most importantly, I don‟t think you guys would give weight to what I would have to say!

– “Seriously, except a few I have never seen anyone attend it”.

P:- Recently, an Open Meeting was held. Did you attend it?..... and it goes on until both feel tired or one has to hurry.

We can draw several inferences from this simple dialogue. The introduction points to lack of awareness and formalism and lack of correct publicity. The problem of awareness implies- people are not knowledgeable about the working of the parliament. Formalism implies- absence of documents regarding the Parliament. And Correct publicity demands the increase in efforts of publicizing its goals , rules, policies and work done. Even politicians publicize their charters etc before the elections.

NP to P :- Where are you hurrying off to? P:- Arey, Today is the Parliament Meeting ! NP :- Hah! Who goes for a Parliament meeting ! .. Come on lets play CS or rather complete that xyz Assignment. Parliament is a complete time waste. Wont fetch you anything except some certificates !. [P responds ] 1.A dedicated P :- It‟s not like that! parliament is for you guys. We attempt to solve daily problems. 2.A non-dedicated P:- Whatever! Gotta attend it else they wont give me the certificates. 3.A dedicated house leader :- I have no desire of attending the parliament yaar!.. I like to do my house work. Organize events etc.. Stuck with it. Isn‟t the work I do important? I organize events well! That‟s my job nothing more! [NP responds] A non-concerned NP:- Arey! I am least interested. Go and get it done fast. A concerned NP:- For any of the cases:- Watever!.. Your Parliament is for the select few, of the select few and by the select few. It‟s a good time to catch up with those, whom you don‟t meet often!. [P responds] A non-dedicated P and dedicated house leader leave. The on-

Another observation is in the case of non-dedicated P and dedicated house leader. The basic question to ask is, should we be having someone not interested in the Parliament? Another question would be - Is it needed that someone who is a good sportsperson/cultural enthusiast but not interested in the Parliament, be forced to be a member? What is the need to include house representatives in the Parliament? In real life there are hardly any house issues, a Parliament is meant for the general grievances. If you agree with the above points, then, you must also agree that a complete structural overhaul of the present parliament is required. Let us now rewind to last year. A constitution was presented in the parliament for adding some rudimentary formalism. This in turn triggered a host of discussions and attempts were made to answer all those questions by the dedicated P‟s. It was even decided to shift back to macro-democracy, in other words, elections, so that people can have faith in their leaders. A very good decision but not supported by the majority of IIITians as very few turned up for the Open Meeting held earlier this year. Regarding this we caught up with our present Speaker- Mr . Supreet Acharya(UG2K7). He says “Yes I do agree that very few Parliamentarians are interested in the on goings of the