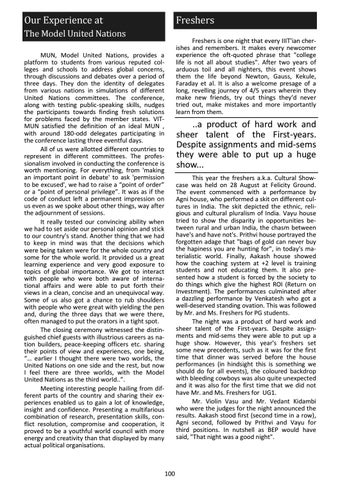 Freshers is one night that every IIIT'ian cherishes and remembers. It makes every newcomer experience the oft-quoted phrase that "college life is not all about studies". After two years of arduous toil and all nighters, this event shows them the life beyond Newton, Gauss, Kekule, Faraday et al. It is also a welcome presage of a long, revelling journey of 4/5 years wherein they make new friends, try out things they’d never tried out, make mistakes and more importantly learn from them.

MUN, Model United Nations, provides a platform to students from various reputed colleges and schools to address global concerns, through discussions and debates over a period of three days. They don the identity of delegates from various nations in simulations of different United Nations committees. The conference, along with testing public-speaking skills, nudges the participants towards finding fresh solutions for problems faced by the member states. VITMUN satisfied the definition of an ideal MUN , with around 180-odd delegates participating in the conference lasting three eventful days. All of us were allotted different countries to represent in different committees. The professionalism involved in conducting the conference is worth mentioning. For everything, from 'making an important point in debate' to ask 'permission to be excused', we had to raise a “point of order” or a “point of personal privilege”. It was as if the code of conduct left a permanent impression on us even as we spoke about other things, way after the adjournment of sessions. It really tested our convincing ability when we had to set aside our personal opinion and stick to our country’s stand. Another thing that we had to keep in mind was that the decisions which were being taken were for the whole country and some for the whole world. It provided us a great learning experience and very good exposure to topics of global importance. We got to interact with people who were both aware of international affairs and were able to put forth their views in a clean, concise and an unequivocal way. Some of us also got a chance to rub shoulders with people who were great with yielding the pen and, during the three days that we were there, often managed to put the orators in a tight spot. The closing ceremony witnessed the distinguished chief guests with illustrious careers as nation builders, peace-keeping officers etc. sharing their points of view and experiences, one being, “… earlier I thought there were two worlds, the United Nations on one side and the rest, but now I feel there are three worlds, with the Model United Nations as the third world..”. Meeting interesting people hailing from different parts of the country and sharing their experiences enabled us to gain a lot of knowledge, insight and confidence. Presenting a multifarious combination of research, presentation skills, conflict resolution, compromise and cooperation, it proved to be a youthful world council with more energy and creativity than that displayed by many actual political organisations.