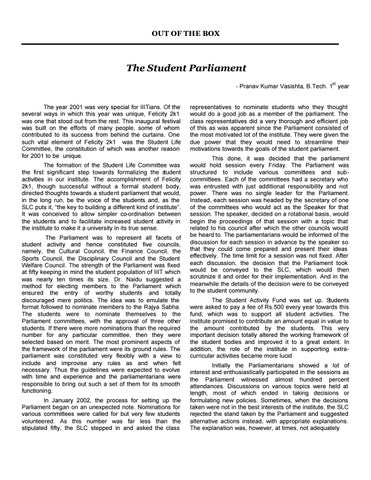 OUT OF THE BOX

The year 2001 was very special for IIITians. Of the several ways in which this year was unique, Felicity 2k1 was one that stood out from the rest. This inaugural festival was built on the efforts of many people, some of whom contributed to its success from behind the curtains. One such vital element of Felicity 2k1 was the Student Life Committee, the constitution of which was another reason for 2001 to be unique. The formation of the Student Life Committee was the first significant step towards formalizing the student activities in our institute. The accomplishment of Felicity 2k1, though successful without a formal student body, directed thoughts towards a student parliament that would, in the long run, be the voice of the students and, as the SLC puts it, â&#x20AC;&#x153;the key to building a different kind of instituteâ&#x20AC;?. It was conceived to allow simpler co-ordination between the students and to facilitate increased student activity in the institute to make it a university in its true sense. The Parliament was to represent all facets of student activity and hence constituted five councils, namely, the Cultural Council, the Finance Council, the Sports Council, the Disciplinary Council and the Student Welfare Council. The strength of the Parliament was fixed at fifty keeping in mind the student population of IIIT which was nearly ten times its size. Dr. Naidu suggested a method for electing members to the Parliament which ensured the entry of worthy students and totally discouraged mere politics. The idea was to emulate the format followed to nominate members to the Rajya Sabha. The students were to nominate themselves to the Parliament committees, with the approval of three other students. If there were more nominations than the required number for any particular committee, then they were selected based on merit. The most prominent aspects of the framework of the parliament were its ground rules. The parliament was constituted very flexibly with a view to include and improvise any rules as and when felt necessary. Thus the guidelines were expected to evolve with time and experience and the parliamentarians were responsible to bring out such a set of them for its smooth functioning. In January 2002, the process for setting up the Parliament began on an unexpected note. Nominations for various committees were called for but very few students volunteered. As this number was far less than the stipulated fifty, the SLC stepped in and asked the class

representatives to nominate students who they thought would do a good job as a member of the parliament. The class representatives did a very thorough and efficient job of this as was apparent since the Parliament consisted of the most motivated lot of the institute. They were given the due power that they would need to streamline their motivations towards the goals of the student parliament. This done, it was decided that the parliament would hold session every Friday. The Parliament was structured to include various committees and subcommittees. Each of the committees had a secretary who was entrusted with just additional responsibility and not power. There was no single leader for the Parliament. Instead, each session was headed by the secretary of one of the committees who would act as the Speaker for that session. The speaker, decided on a rotational basis, would begin the proceedings of that session with a topic that related to his council after which the other councils would be heard to. The parliamentarians would be informed of the discussion for each session in advance by the speaker so that they could come prepared and present their ideas effectively. The time limit for a session was not fixed. After each discussion, the decision that the Parliament took would be conveyed to the SLC, which would then scrutinize it and order for their implementation. And in the meanwhile the details of the decision were to be conveyed to the student community. The Student Activity Fund was set up. Students were asked to pay a fee of Rs.500 every year towards this fund, which was to support all student activities. The institute promised to contribute an amount equal in value to the amount contributed by the students. This very important decision totally altered the working framework of the student bodies and improved it to a great extent. In addition, the role of the institute in supporting extracurricular activities became more lucid. Initially the Parliamentarians showed a lot of interest and enthusiastically participated in the sessions as the Parliament witnessed almost hundred percent attendances. Discussions on various topics were held at length, most of which ended in taking decisions or formulating new policies. Sometimes, when the decisions taken were not in the best interests of the institute, the SLC rejected the stand taken by the Parliament and suggested alternative actions instead, with appropriate explanations. The explanation was, however, at times, not adequately