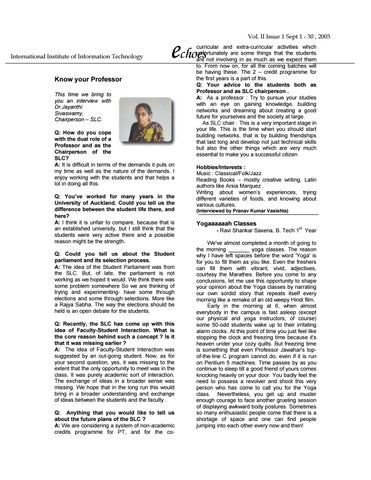 Know your Professor This time we bring to you an interview with Dr.Jayanthi Sivaswamy, Chairperson – SLC. Q: How do you cope with the dual role of a Professor and as the Chairperson of the SLC? A: It is difficult in terms of the demands it puts on my time as well as the nature of the demands. I enjoy working with the students and that helps a lot in doing all this. Q: You’ve worked for many years in the University of Auckland. Could you tell us the difference between the student life there, and here? A: I think it is unfair to compare, because that is an established university, but I still think that the students were very active there and a possible reason might be the strength. Q: Could you tell us about the Student parliament and its selection process. A: The idea of the Student Parliament was from the SLC. But, of late, the parliament is not working as we hoped it would. We think there was some problem somewhere So we are thinking of trying and experimenting- have some through elections and some through selections. More like a Rajya Sabha. The way the elections should be held is an open debate for the students. Q: Recently, the SLC has come up with this idea of Faculty-Student Interaction. What is the core reason behind such a concept ? Is it that it was missing earlier ? A: The idea of Faculty-Student Interaction was suggested by an out-going student. Now, as for your second question, yes, it was missing to the extent that the only opportunity to meet was in the class. It was purely academic sort of interaction. The exchange of ideas in a broader sense was missing. We hope that in the long run this would bring in a broader understanding and exchange of ideas between the students and the faculty . Q: Anything that you would like to tell us about the future plans of the SLC ? A: We are considering a system of non-academic credits programme for PT, and for the co-

curricular and extra-curricular activities which unfortunately are some things that the students are not involving in as much as we expect them to. From now on, for all the coming batches will be having these. The 2 – credit programme for the first years is a part of this. Q: Your advice to the students both as Professor and as SLC chairperson . A: As a professor : Try to pursue your studies with an eye on gaining knowledge, building networks and dreaming about creating a good future for yourselves and the society at large. As SLC chair : This is a very important stage in your life. This is the time when you should start building networks, that is by building friendships that last long and develop not just technical skills but also the other things which are very much essential to make you a successful citizen Hobbies/Interests : Music : Classical/Folk/Jazz Reading Books – mostly creative writing, Latin authors like Arsia Marquez . Writing about women’s experiences, trying different varieties of foods, and knowing about various cultures. (Interviewed by Pranav Kumar Vasishta)

We've almost completed a month of going to the morning _______ yoga classes. The reason why I have left spaces before the word 'Yoga' is for you to fill them as you like. Even the freshers can fill them with vibrant, vivid, adjectives, courtesy the Marathes. Before you come to any conclusions, let me use this opportunity to shape your opinion about the Yoga classes by narrating our own sordid story that repeats itself every morning like a remake of an old weepy Hindi film. Early in the morning at 6, when almost everybody in the campus is fast asleep (except our physical and yoga instructors, of course) some 50-odd students wake up to their irritating alarm clocks. At this point of time you just feel like stopping the clock and freezing time because it's heaven under your cozy quilts. But freezing time is something that even Professor Jawahar's topof-the-line C program cannot do, even if it is run on Pentium 5 machines. Time passes by as you continue to sleep till a good friend of yours comes knocking heavily on your door. You badly feel the need to possess a revolver and shoot this very person who has come to call you for the Yoga class. Nevertheless, you get up and muster enough courage to face another grueling session of displaying awkward body postures. Sometimes so many enthusiastic people come that there is a shortage of space and one can find people jumping into each other every now and then!