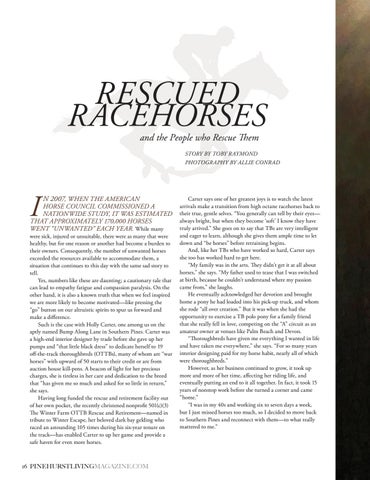 RESCUED RACEHORSES and the People who Rescue Them

HORSE COUNCIL COMMISSIONED A NATIONWIDE STUDY, IT WAS ESTIMATED THAT APPROXIMATELY 170,000 HORSES WENT “UNWANTED” EACH YEAR . While many

were sick, injured or unsuitable, there were as many that were healthy, but for one reason or another had become a burden to their owners. Consequently, the number of unwanted horses exceeded the resources available to accommodate them, a situation that continues to this day with the same sad story to tell. Yes, numbers like these are daunting; a cautionary tale that can lead to empathy fatigue and compassion paralysis. On the other hand, it is also a known truth that when we feel inspired we are more likely to become motivated—like pressing the “go” button on our altruistic spirits to spur us forward and make a difference. Such is the case with Holly Carter, one among us on the aptly named Bump Along Lane in Southern Pines. Carter was a high-end interior designer by trade before she gave up her pumps and “that little black dress” to dedicate herself to 19 off-the-track thoroughbreds (OTTBs), many of whom are “war horses” with upward of 50 starts to their credit or are from auction house kill-pens. A beacon of light for her precious charges, she is tireless in her care and dedication to the breed that “has given me so much and asked for so little in return,” she says. Having long funded the rescue and retirement facility out of her own pocket, the recently christened nonprofit 501(c)(3) The Winter Farm OTTB Rescue and Retirement—named in tribute to Winter Escape, her beloved dark bay gelding who raced an astounding 105 times during his six-year tenure on the track—has enabled Carter to up her game and provide a safe haven for even more horses.

Carter says one of her greatest joys is to watch the latest arrivals make a transition from high octane racehorses back to their true, gentle selves. “You generally can tell by their eyes— always bright, but when they become ‘soft’ I know they have truly arrived.” She goes on to say that TBs are very intelligent and eager to learn, although she gives them ample time to let down and “be horses” before retraining begins. And, like her TBs who have worked so hard, Carter says she too has worked hard to get here. “My family was in the arts. They didn’t get it at all about horses,” she says. “My father used to tease that I was switched at birth, because he couldn’t understand where my passion came from,” she laughs. He eventually acknowledged her devotion and brought home a pony he had loaded into his pick-up truck, and whom she rode “all over creation.” But it was when she had the opportunity to exercise a TB polo pony for a family friend that she really fell in love, competing on the “A” circuit as an amateur owner at venues like Palm Beach and Devon. “Thoroughbreds have given me everything I wanted in life and have taken me everywhere,” she says. “For so many years interior designing paid for my horse habit, nearly all of which were thoroughbreds.” However, as her business continued to grow, it took up more and more of her time, affecting her riding life, and eventually putting an end to it all together. In fact, it took 15 years of nonstop work before she turned a corner and came “home.” “I was in my 40s and working six to seven days a week, but I just missed horses too much, so I decided to move back to Southern Pines and reconnect with them—to what really mattered to me.” 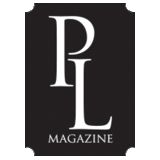