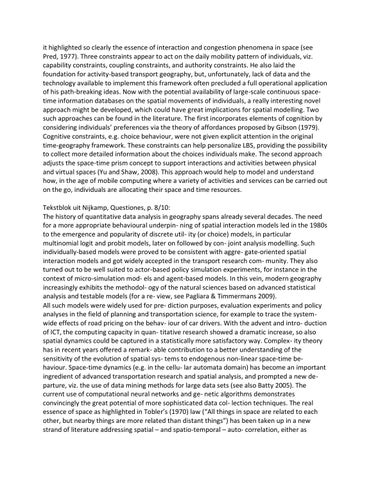 it highlighted so clearly the essence of interaction and congestion phenomena in space (see Pred, 1977). Three constraints appear to act on the daily mobility pattern of individuals, viz. capability constraints, coupling constraints, and authority constraints. He also laid the foundation for activity-based transport geography, but, unfortunately, lack of data and the technology available to implement this framework often precluded a full operational application of his path-breaking ideas. Now with the potential availability of large-scale continuous spacetime information databases on the spatial movements of individuals, a really interesting novel approach might be developed, which could have great implications for spatial modelling. Two such approaches can be found in the literature. The first incorporates elements of cognition by considering indi iduals’ preferences ia the theory of affordances proposed by Gibson (1979). Cognitive constraints, e.g. choice behaviour, were not given explicit attention in the original time-geography framework. These constraints can help personalize LBS, providing the possibility to collect more detailed information about the choices individuals make. The second approach adjusts the space-time prism concept to support interactions and activities between physical and virtual spaces (Yu and Shaw, 2008). This approach would help to model and understand how, in the age of mobile computing where a variety of activities and services can be carried out on the go, individuals are allocating their space and time resources. Tekstblok uit Nijkamp, Questiones, p. 8/10: The history of quantitative data analysis in geography spans already several decades. The need for a more appropriate behavioural underpin- ning of spatial interaction models led in the 1980s to the emergence and popularity of discrete util- ity (or choice) models, in particular multinomial logit and probit models, later on followed by con- joint analysis modelling. Such individually-based models were proved to be consistent with aggre- gate-oriented spatial interaction models and got widely accepted in the transport research com- munity. They also turned out to be well suited to actor-based policy simulation experiments, for instance in the context of micro-simulation mod- els and agent-based models. In this vein, modern geography increasingly exhibits the methodol- ogy of the natural sciences based on advanced statistical analysis and testable models (for a re- view, see Pagliara &amp; Timmermans 2009). All such models were widely used for pre- diction purposes, evaluation experiments and policy analyses in the field of planning and transportation science, for example to trace the systemwide effects of road pricing on the behav- iour of car drivers. With the advent and intro- duction of ICT, the computing capacity in quan- titative research showed a dramatic increase, so also spatial dynamics could be captured in a statistically more satisfactory way. Complex- ity theory has in recent years offered a remark- able contribution to a better understanding of the sensitivity of the evolution of spatial sys- tems to endogenous non-linear space-time behaviour. Space-time dynamics (e.g. in the cellu- lar automata domain) has become an important ingredient of advanced transportation research and spatial analysis, and prompted a new departure, viz. the use of data mining methods for large data sets (see also Batty 2005). The current use of computational neural networks and ge- netic algorithms demonstrates convincingly the great potential of more sophisticated data col- lection techniques. The real essence of space as highlighted in Tobler’s (1970) law (“All things in space are related to each other, but nearb things are more related than distant things”) has been taken up in a new strand of literature addressing spatial – and spatio-temporal – auto- correlation, either as